It's about that time of year for me to find some piñons to kill.
I had planned on getting out in August this year, but too much going on. Wanted to see if some extra time before dormancy would increase survival time.

So, here's this year's already-presumed-casualties. 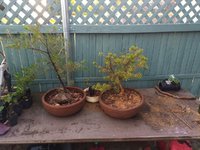 The one on the left was found growing in mostly decomposing forest litter on a nearby mountain side, and would have come out with plenty of root if I hadn't slipped and yanked the whole darn thing out in an attempt to not fall into a cactus.
The one on the left was discovered growing in a shale hillside right on the road to the previously mentioned mountain side. Came out fairly clean and with more root than I've ever been able to get before, by allot. Lot fill the pot and cover said substantial root mass, the soil that the trees were found in from both places was combined along with the leftovers of previous attempts.
SO MUCH MY IN THAT STUFF. But also crap drainage still. That's what the second tree is in. Picked it for what I'd hoped would be better soil since it seemed to have the better chance to survive.
The first, since it has hardly any root and likely won't make it, got dropped in heavy grit sand and peat, since it's what was available, with a fistful of the other soil to inoculate it with the Uber amounts of myco. I actually feel this is the better soil mix.

More pics for the funeral. 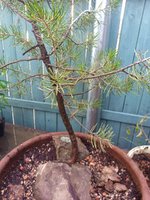 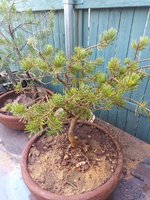 My money's on the second for survival, despite the awful soil with no drainage or airflow. This species- pinus edulus- is known for growing in diverse yet crappy ground.
Fingers crossed for a repot into better soil next winter.
Bet my hands get cramps.

I believe I've killed a piñon in a new (to me) way! 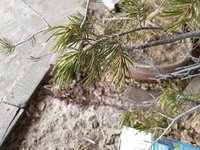 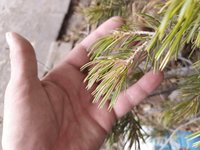 They've never wilted or gotten droopy for me before!
Just dried up and turned brown right in place.

This is the first one in the original post that had almost no root, and the one my kids brought in for the holidays to use as a Christmas tree.
My guess is the sudden transition back outdoors into the freezing nights has something to do with it.

Whatever the cause, it has to be alive in order to be dying in a new way, so I just doubled my knowledge points.

Thoughts on this necropsy?

You nailed it, da dum.

Bringing a tree inside, for more than 24 hours, will undo months worth of metabolic changes for winter hardiness. Exact details of how many hours at what temperature will reduce hardiness by what amount are not known by me.

I do know blueberries exposed to 75 F day in January followed by 0 F night less than a week later had a 90% kill of flower buds and resulting fruit loss. Normally in a normal winter, blueberry flower buds are hardy to -18 F. But the warm January thaw undid the hardiness adaptations of the blueberries. They had started to "wake up".

Hmmm! SORRY, I would never bring anything home that I thought was going to die. If you tore off most of the roots when collecting, just leave it in the woods and move on to something else. If you're going to collect from the wild don't waste your time on something as sorry as the left one, and for crying out loud get some decent bonsai soil. You've been doing this long enough to be doing much better than this man.

You have a love-hate toxic relationship with pines dont you?

Pumice and a much bigger ball of field soil. Also, be choosy about what the piñon is growing in. If the field soil wants to completely fall off at every collection, or even just loosen for that matter, don’t even try. I’ve really only had a few successes, but the ones I’ve had were growing in composted pine needles duff and a caliche or clay like soil. Completely over potted with pumice and water often. Also, each was collected in late spring. Piñon field roots are typically thick and long. But I believe, it’s the tiny almost unseen roots growing off of these that create survival. Overly disturbing the field soil rips off all of these little guys and gives zero chance for survival. Being in southern Colorado, you should be close enough to massive pumice mines to have a lot on hand at all times. It is, in my opinion the best catch all for colllected trees I’m certainly no piñon collecting expert, but I’ve killed quite a few myself and these are my experiences.

When you go collecting for these, what are you bringing to wrap the root ball with?

I slipped on the mountain side while digging this one and accidentally ripped it off the roots. I was certain it would die anyway, and that's the only reason I let the kids bring it inside.
The other one seems to be doing much better.

Hartinez said:
When you go collecting for these, what are you bringing to wrap the root ball with?
Click to expand...

I dug this one out of pine duff and lose rocks. Aside from my accident it was going smoothly. I wrapped the roots in a plastic bag and filled it with the pine duff, which was later used to fill out the soil the other tree is in. It can out of a caliche berm with nearly all the roots intact.
I'll be trying spring time collection this year again and am already preparing for it.

And @August44, you're absolutely right on all counts.
Unfortunately my current circumstances prevent me from spending money on pretty much anything because my ex gets all of it now. So buying soil isn't an option for me. I have to find/make it the old fashioned way.

Next time you go. Take this with you. Ensures the rootball stays firm and intact for the walk out, drive home, and when you take it off, just use a sharp knife or pair of scissors. I don’t even lift the tree a little bit, till I get most of the ball wrapped. 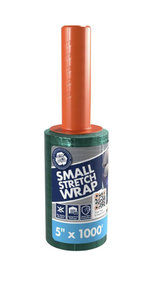 Hartinez said:
Next time you go. Take this with you. Ensures the rootball stays firm and intact for the walk out, drive home, and when you take it off, just use a sharp knife or pair of scissors. I don’t even lift the tree a little bit, till I get most of the ball wrapped.
View attachment 416301
Click to expand...

Good idea. I'll see if I can squeeze it into the budget on payday on the 1st.
Right now I have $14 and a quarter tank of gas to get by on.

ShadyStump said:
Good idea. I'll see if I can squeeze it into the budget on payday on the 1st.
Right now I have $14 and a quarter tank of gas to get by on.
Click to expand...

A roll at a hardware store is 7 bucks or less. A roll of cling wrap works also, 4 bucks or less. I def understand budget restraints, but I will also say, bonsai can be, but is not really, an inexpensive hobby. Digging trees with subpar tools, materials etc, just ensures the trees death. Not always. But in my 10 years of doing it, that has been my experience.

Consider move to Utah or other haven from golddigging exes

Potawatomi13 said:
Consider move to Utah or other haven from golddigging exes

If only it were that easy.

Potawatomi13 said:
Consider move to Utah or other haven from golddigging exes

YOU live in my favorite location! (so far)

You should be trying to get more people to Oregon.

HorseloverFat said:
YOU live in my favorite location! (so far)

You should be trying to get more people to Oregon.

NO THANKS! Already ruined by Kalifornicating socialists migrations

Did they mess up the trails???

ShadyStump said:
If only it were that easy.
Click to expand...

Would that it twas so simple

Potawatomi13 said:
NO THANKS! Already ruined by Kalifornicating socialists migrations

I agree with the ruination of this beautiful state, but do think it was well on it's way to where it is now with the elected officials in Salem long before the Californians got involved.
You must log in or register to reply here.