Good morning! Picked this thuja up this weekend at the local bonsai show, wanted to share it with everybody. I cleaned it a bit yesterday and got quite a bit of dirt and wood bits out of lower section, there was enough junk in the deadwood that it looked like one solid piece. Is it worth applying lime sulfur to the deadwood, especially the darker spots? I worry that there is some rot going on...

The section of the tree circled in purple is completely separated from the rest of it, debating on keeping it or moving it to its own pot, or planting. Perhaps a stupid question: does leaving the purple section as part of the tree mean that there is not technically inverse taper? 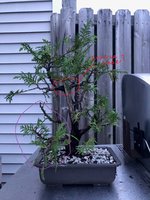 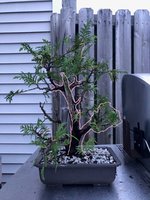 The bottom branches have some bad taper as well, not sure what to do about them yet. I did envision removing everything except the bottom right, the top could have some some interesting jin on both sides.

Anyway, sort of a weird little tree, looks like it will present some interesting challenges. 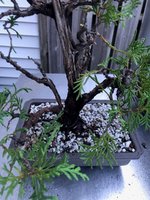 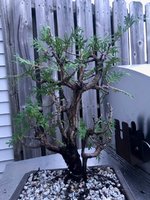 Old collected trees have inverse taper. Don't be to dead set on the "old" rules set out by the idealistic.

Fortunately it's a evergreen, so just hide the inverse taper with foliage and learn to appreciate the tree for it's uniqueness and age.

"I see inverse taper" to the same cadence as "I see dead people".

I've got a couple Thuja from Matt G in Benton Harbor, I keep forgetting his last name. He has some great collected Thuja.

You Thuja is an old tree. I would guess at least 50 years old. Your proposals would remove all the good character of the tree. Just leave it alone for a year or two. It needs time to develop a new root system and start growing. Mine did not really begin to grow until their second summer in my care. You don't want to do any pruning or styling until after a summer where it has added a couple inches of growth all around.

The natural wild form for most Thuja is a candelabra form. That lowest branch is typical of the candelabra form. It does not have its own roots, it can not be separated from the main trunk. It is "kinda clunky" in that it has knots and knobs. I could see eventually removing that branch. Rather than cut it off, strip the bark to jin the branch.

Thuja normally have a fair amount of deadwood, as bonsai we often leave a deadwood much like we would on a juniper. So instead of cutting off branches, strip the bark and create deadwood.

@Jiminsauga Thank you for reminding me that I don't always have to do something to a tree. I should remember that it's okay to just appreciate something before I go crazy!

@Leo in N E Illinois I got this one from Matt as well! Last name is Gothberg, Lakeside Bonsai. I got a really cool larch from him at the last show. He always has great stuff, I expect he will get most of my business at future shows.

Cool to think it is that old! Thank you for your advice on creating deadwood. I will plan to leave it be, I'm not really in a hurry to be pruning at it or anything, but I always am in a hurry to get an idea of design options.

Matt Gothberg, yes, he has great stuff. He has come to vend at bonsai shows in IL and Wisconsin. I highly recommend his trees. More Illinois and Wisconsin people should get to know him.

@crisismode Mirai just happened to put out a good little video on YouTube this week related to ancient trees. If you're looking for inspiration on how to style maybe it give it a view.

I was scoping some of his trees, bummed I missed you at the show. I didn’t show up until 230p yesterday and helped break down everything.

@Jiminsauga I will check it out, thanks!

@Brad in GR Maybe I will catch you in the spring! I was there Saturday for a bit, so much too look at. Did you get anything?

@Brad in GR Maybe I will catch you in the spring! I was there Saturday for a bit, so much too look at. Did you get anything?
Click to expand...

I bought a (another) pot from Teresa Wooden (Stone Forest Pottery)... but no trees. I have a collected thuja that I got up north a few years ago and waiting until I feel I've learned enough prior to going back up (or getting one at a show) again.

Certainly will be there at the all state show next spring. You should come to a meeting if you get the chance, West Michigan Bonsai Club on facebook.
You must log in or register to reply here.