Fourth year of work on this cuspidata 'nana'... not as far along as it should be, but it has had some tough root work which I have been taking very slowly (probably too slowly)... I think I underestimated the strength of the yew root system...

The tree has been ground layered twice... once in the ground during 2007, and is currently being 'layered' again in its present pot as I have girdled the remaining taproots below the new roots from the first ground layer. I probably could have cut them off instead of girdling, but I was paranoid so took it slowly.

2007 in the ground after a hard pruning... unfortunately it didn't bud back on the trunk as I hoped it would.

2008 Summer in its training pot. The depth of the pot indicates how deep the taproots still go.

Current state of the yew... had another hard pruning this spring, and some new shari work (just bark peeling no carving). The new shari are indicated with arrows... they are hard to see because they are covered in a black fungus... I don't mind, it should help age the freshly exposed wood. Dashed lines show where heavy branches will be carved off next year. There is a new apex I have been forming below the top cut, which will balance the tree more to the right. The heavy branch on the left which will be removed also has a 'lighter' replacement branch. Both of these are hard to see among the jumble of foliage.

A thick back branch which I recently hollowed out to make it possible to bend it down... damn yews take alot of coaxing to move thick branches. I had to hollow the entire branch just to pull it down about 15 degrees.

Trunk detail (before new shari)... this is how it came from the nursery.

Next spring it should be able to go into a bonsai training pot.

This yew is interesting for me... I love the character of the trunk, but it is lacking branches in some important spots, lacking three-dimensional movement, and has a straigh section in the middle (the new upper shari is to help distract from that)... nevertheless, I really like it and I have come to realize that it will be beautiful even with its faults. I am surprised that I have not been able to get it to bud from the trunk. Maybe I haven't cut it back hard enough, or maybe I haven't let it get strong enough in between insults. Probably will be another 2-3 years before it starts to look like a bonsai.

is probably my inspiration for this tree.

Not that I am aiming for it to look like Graham's tree, but I like how Graham took a tree with similar faults to mine (straight regions in the trunk, some bare spots from missing branches) and, by focusing on the details, made an undeniably amazing tree.

Japanese and English yew bushes can have enough poison to kill a horse.

Anyway good start. If I were you I would create some drastic shari like Morten Albek did with this yew, http://www.shohin-europe.com/ALBEKGALLERY-yew1.html
Last edited: Jun 24, 2009

I've heard that its not the actual yew that makes the poison... it is a fungus that grows in association with the tree. This was discovered when they (unsuccessfully) tried to find ways to isolate the toxin from young trees to make a chemotherapeutic called Taxol, as opposed to killing ancient pacific yews to harvest the drug.

Interesting idea with the dramatic shari, but I think this is an unnecessary move for this tree. I am trying to show some sensitivity to what the tree already has, and just tweak it. Marco Invernizzi designed the new shari's that I showed in the pic, and talked me out of chopping the tree to make a more compact and classical image... I really like the top one, it gives the trunk a twisting feeling and I think it will be quite impressive when I clean it up.

Thanks for the comments. 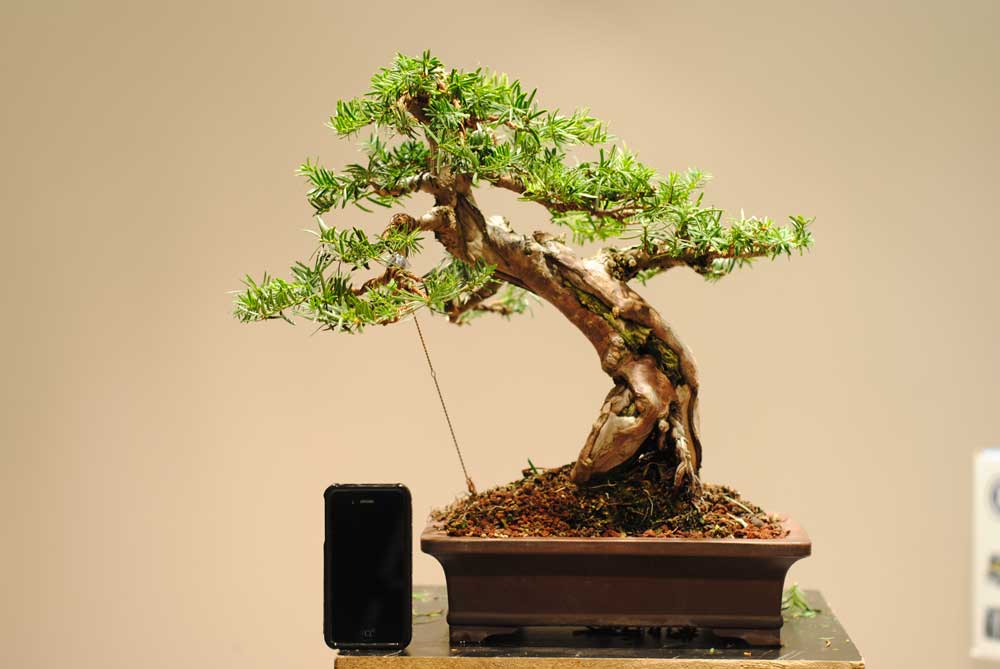 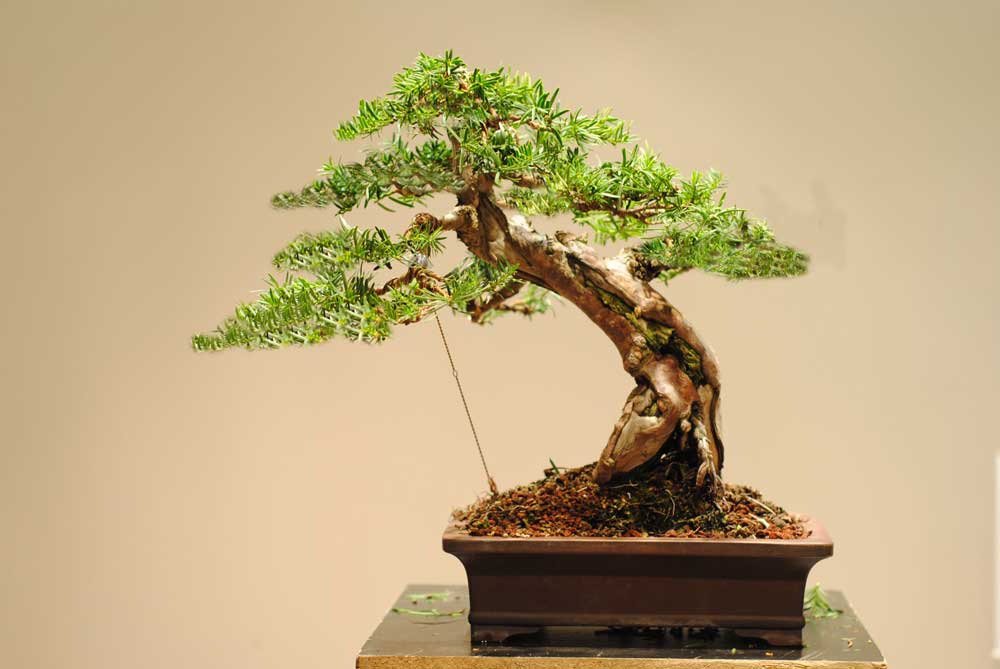 Amkhalid, nice tree looks great. I was wondering if you wrote this wrong in teh first post, you wrote that it was layered in the ground yet it still had tap roots which you later had girdled? Does this mean the layer developed taproots?

No its just that the layer was done in two steps. First one was just peeling flaps of bark in the ground. This produced some surface roots but not enough that I was confident to remove the entire old root system. When i potted it up, I girdled most of the remaining tap roots. I consider this the second step of the layer.

After seven years and its fourth repotting I finally got rid of the majority of thick downward growing roots this spring. Some lumps still remain which cause the tree to sit higher in the pot. I need someone to hold the tree for me while I work the reciprocating saw/grinder. That'll be spring 2013 or 2014.

This undershot of this spring's repotting clearly shows the remains of the old root taproots. 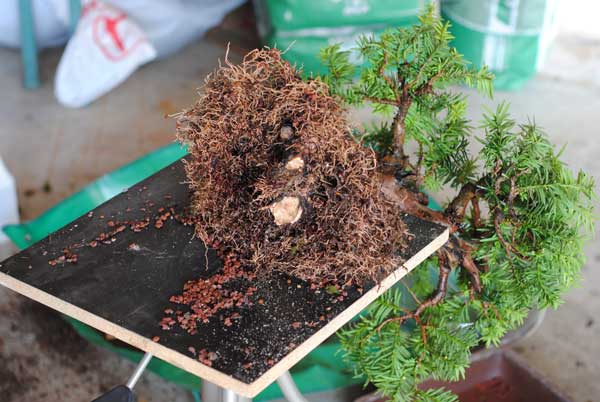 That is a sweet little tree...great job developing the canopy.

Looks great, quite a change since the original post a few years ago.
B

Looks like you eventually got the backbudding you wanted. Was it a matter of waiting, or did it respond to additional pruning?
Tom Brown (Tachigi) had a lot of valuable insight on yews and used to moderate a Webex-type forum called Bosai Vault. I read some of the transcripts from the sessions and they were chock-full of interesting tips. For example, he stated that he could induce backbudding on stubborn branches by coiling wire tightly at their bases. Unfortunately, it appears that site has been co-opted by one of those vulture organizations that take abandoned websites.
Has anyone tried this method?

Quite lovely Amkhalid, it's quite a wonderful transformation from there to here...

bougie nights said:
Looks like you eventually got the backbudding you wanted. Was it a matter of waiting, or did it respond to additional pruning?
Tom Brown (Tachigi) had a lot of valuable insight on yews and used to moderate a Webex-type forum called Bosai Vault. I read some of the transcripts from the sessions and they were chock-full of interesting tips. For example, he stated that he could induce backbudding on stubborn branches by coiling wire tightly at their bases. Unfortunately, it appears that site has been co-opted by one of those vulture organizations that take abandoned websites.
Has anyone tried this method?
Click to expand...

Ive been getting the branches to bud back pretty well without any special treatment. Just cycles of pruning, wiring, and strong growth achieved by lots of sun, water, and ferts. That seems to do the trick.
O

This tree is beautiful.. I love everything about it.

Agreed! VERY nice transformation! I was just saying today that I would like to work with yew someday...
You must log in or register to reply here.

J
Can you bareroot a nursery yew?