OK for a display?

This is a very nice oriental statue that stands 10” tall. I was wondering if anyone has ever used something like this as an accent piece when displaying their trees. Comments please.
P

If it speaks to you, go for it. I think you would be surprised what people will display with their bonsai.

I'm infamous for my Chinese pots and I can tell you that il cognoscenti will crucify you. And, they use big nails.
W

Being a Dutchman, this type of earthenware reminds me of https://en.wikipedia.org/wiki/Delftware
It could very well be European of origin.

You see how the rubber duckies "speak" to the yellow in the tree?

I believe that's why it works.

The statue is a bit ornate and will distract from the other parts in a traditional display.

Not saying you can't use it, but success WILL be hard.

I would try to get the foliage at least 3x the size of the statue away from the statue via big tree, stand,etc.

It only needs to speak to the op, unless it is to be displayed in a show. Otherwise, the hell with the rules, kust be aware of them.

Being a Dutchman, this type of earthenware reminds me of https://en.wikipedia.org/wiki/Delftware
It could very well be European of origin.
Click to expand...

My wife and I have been collecting Delft for years. We just made a trip to Michigan and visited the American factory in Holland, Michigan. We also bought another pair of wooden shoes.

I have a Delf looking shoe from a Holland, MI trip, currently unused waiting for dutch? tree. And, others...

Several things to think about when utilizing a piece in a display. I think Bill was referencing size...The tree size would need to be appropriate for the accent used. In this case I am guessing the piece to be 8-10" high. So how large would the tree need to be?

Another point would be what story you are trying to convey. With the Shi or Foo Dogs surrounding the piece, to me it indicates this is a depiction of a Chinese emperor. Are there any tales relating to the emperor and trees? I found this one below:
How Tea came to China
According to a Chinese legend, tea was discovered accidentally by emperor Shennung, 神農氏, 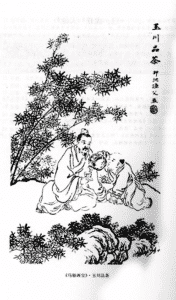 approximately 2737 years before Christ.
The emperor set up camp with his entourage in the shade of a large tree. the cook prepared a fire and a pot with boiling water over it. The heat of the fire brought some of the leaves of the long branches of the tree to dry out. Suddenly, a fierce wind got up and blew some of the leaves into the pot with boiling water. The water turned golden and a highly pleasant scent appeared. The emperor tried the drink and was delighted by the scent and delicious taste. Being immediately aware of the refreshing and invigorating effect, the emperor let out the sound

The last point is that this is ceramic, which would be a more informal material. Using a formal species such as a pine or evergreen may be difficult to harmonize....so a Deciduous, flowering or fruiting species of tree may better complement this particular accent piece....

Cutest thing ever! Am I allowed to say that? May I share this to my FB group? Or will it be in a blog later to share at a later date?

Forsoothe! said:
I'm infamous for my Chinese pots and I can tell you that il cognoscenti will crucify you. And, they use big nails.
Click to expand...

As a wise man once said, “Scroom.”

I have found some amazing pieces of blue and white transferware at my Asian grocer, for peanuts. The shallow, bowl-shaped sake cups make nice accent or kusamono pots. I have one piece that looks like your first picture, already drilled and waiting for it’s first occupant come spring. That tall hex pot [#5] is very cool.
If you could lay hands on an Ulmus hollandica hybrid, planting it in a Delft shoe would be clever, indeed—though you would constantly be having to explain the joke.
You must log in or register to reply here.
Share:
Facebook Twitter Reddit Pinterest Tumblr WhatsApp Email Link