I like birch a lot (as does everyone) but I don't see many as Bonsai, in fact I have only seen one, that was here, styled as an informal upright but nothing like a birch. Consequently I see no definitive info on Birch other than what makes them bad Bonsai. I have heard the negative traits include, very soft wood, dieback (dropping complete branches), producing suckers rather than back budding when cutback or chopped and a trait of one root feeds one branch (I don't know what it is called) resulting in half a dead trunk.

So, rather than ask a few questions (what I normally do) I will put down what I have and go forward from here and hopefully this thread will accumulate some positive info for others to follow. I noticed a progression series started for Silver Birch, this can ride tandem to that one, maybe they're the same maybe not.

Mine were started from seed, 80 seeds, three saplings, one died, resulting in two trees. I don't know what went wrong with the stratification and germination, the seeds were so small I couldn't tell if they were husk seed or seed in husks. They were germinated in long sphagnum moss, it's possible I did not find and plant some or most of them, possible they were thrown out with the sfagnum moss (funny it's pronounced Spaghnum like spaghetti, LOL. Don't you just love English)

Here they are the first year. 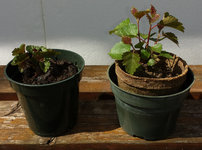 They have had the roots pruned each year but 2020. Here they are @ one year: the two grown together, the two trunks and the forth shot, some dieback after at the 2019 transplant 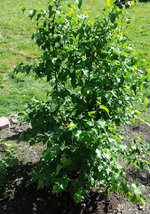 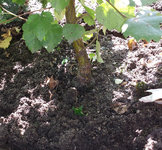 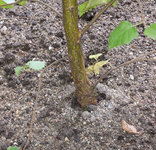 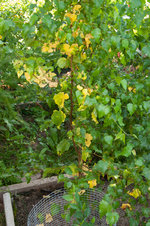 As for this year, I have transplanted them yet again to the lawn, sounds dumb but they are close to the patio so I can keep an eye on them.
First up, buds were here @ transplant, maybe a bit late. 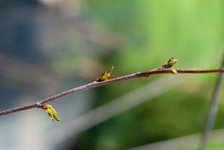 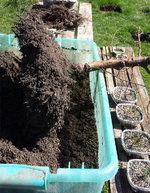 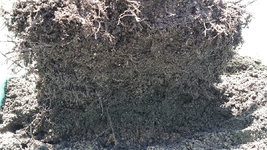 and a trunk reference of only one, this is it's 4th summer. 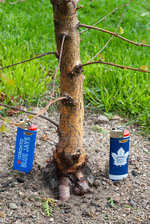 Oh yeah, Leafs are on top and Vlad's found his groove baby! Sunny days are on their way!
O

This shows the base of one of them, germinated in a peat pod, you can still see the remnants of the outer net. 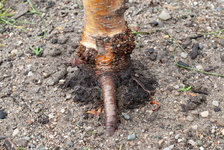 You can see that with the annual root pruning the root ball is flat and it is developing a few larger radial roots. There is a mass of very fine feeder roots mixed in with the remaining peat also 1 larger root to the right, these are now covered with soil. Above are a ton of buds, future suckers I guess.

These roots were covered up until the transplant but just under the surface so they would dry out often. I thought I would keep them damp in the hope of getting more roots like the one to the right.
O

I had bad experience with a Horse Chestnut a few years back, a gift from my Father In-law. I clipped an ugly root coming out of the trunk 2" above soil level, looked great without that root, this killed the branch it was feeding and the strip of trunk between the two, also the entire core of the tree, died and rotted out because it is soft, pithy, shitty wood!!! Birch has also been described as soft & Harry Harrington says dead birch wood is prone to rot.
So the next set of shots are the two trees, (only 3 shots of the first)
Tree 2 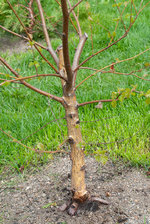 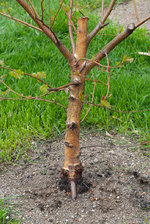 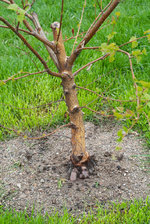 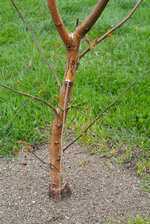 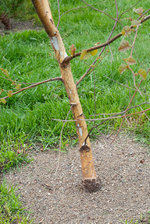 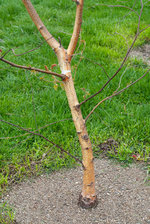 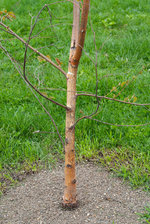 While I welcome any & all styling advice, I'd like to stick with the problem at hand and that is chopping. I have cut one of two leaders on Tree 1 and the only leader on Tree 2 last year because they were just too big for where they were. I looked at the roots when transplanted and they seemed fine with the chops already done. I wondered if these buds at the base developed because of these chops. The point is they are going to need further chopping what I am worried about is if I chop this and choose one leader will the opposite side of the trunk and it's roots die? If there is a risk is there a way to ease through this process and maintain activity throughout the trunk?

There are some good tips in the Bonsai Mirai podcast with Dennis Vojtilla.

If I remember correctly, he chops diagonal between two opposing branches to prevent trunk die back.

The other tip I remember him putting emphasis on was to just go slow and you'll see less die back.

If you are really concerned about die back, I would chop back to the bottom 2 branches, let the tree compartmentalize the chop, and then go back the next year and chop back to the one you want to actually use.

It seems that birch / betula is not such a common tree among BonsaiNut. Let’s see some trees. :)

RJG2 said:
There are some good tips in the Bonsai Mirai podcast with Dennis Vojtilla.

If I remember correctly, he chops diagonal between two opposing branches to prevent trunk die back.

The other tip I remember him putting emphasis on was to just go slow and you'll see less die back.

Thank you, I will have some time tomorrow and later in the week, I will definitely look into this!


Colorado said:
If you are really concerned about die back, I would chop back to the bottom 2 branches, let the tree compartmentalize the chop, and then go back the next year and chop back to the one you want to actually use.
Click to expand...

Yes I think this was what I was looking for, by compartmentalize, you're saying it would break the local connections between roots & limbs, make one less dependent on the other?

It seems that birch / betula is not such a common tree among BonsaiNut. Let’s see some trees. :)

Thanks for bringing that up, this is the thread I had seen, some nice trees and good info thanks.
You must log in or register to reply here.