I'm new to Bonsai and currently harbor two trees. My first, a Chinease Elm which was gifted about three summers ago as a very small, young sapling. Great beginner tree as they are very tough.

My 1st mistake: Initially, not learning of my species of tree; how it grows, native Habitat etc...

Secondly: No real plan on how I wanted to style the tree or no real general knowledge of Bonsai and Horticulture in general.

Third: leaving the tree too long in it's pot, allowing it to become root-bound and performing an emergency repot after returning from a short vacation in September of 2021 after 1/3 of the Tree's foliage dropped. Luckily for me, the tree began to spring-back withing 2-3 weeks and actually had a flush of growth before winter dormancy. Now it has a Buds that are beginning to swell.

Fourth: Work at the wrong time of year. Before I spent some time and actually read a book on Bonsai, I decided I wanted the lower-trunk at soil-level to thicken, and proceeded to scrap some bark from the lower trunk in Fall to induce scarring—which, of course was a terrible idea, hindsight. I noticed after a while I saw some grubs, nibbling away at the bark that had become punky. I removed them, of course and have been keeping the soil on the dry side. Now, I have the issue to fix, which leads me into a question... of how.

I was advised on bare-rooting the tree once the buds begin to swell, which I intend to do. I believe I'm there or very close. We experienced very warm temperatures the last few weeks (60's and 70's) and are expected to drop to well below freezing for a few days for low temperatures, which is unusual for my area. Although, March and April can be two of the nastiest months, here. Is this tree telling me it's safe to repot with some protection, or wait?

I will post pictures of the trunk damage. I was wondering on how to address this issue. Leave it be and let the Phloem and Cambium heal naturally or scrape and paste it to prevent further damage and seal it? 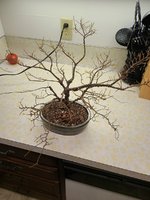 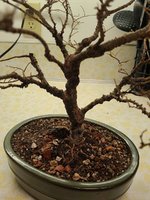 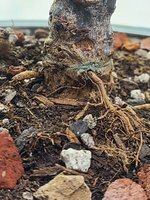 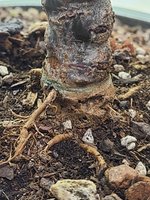 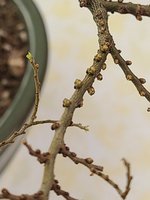 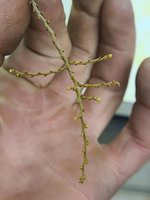 This growing season my plans are to let the tree grow and ensure Health, I also want the trunk to thicken, hence, let it grow.

I appreciate any input.

Perhaps it would be best to remember one insult per year from here on out and put a cap on the ‘fancy stuff’ for a couple years.

Your plan to grow the tree out and let the trunk thicken seems good to me. Personally I’d get it out of the pot and into something like a wooden grow box or Anderson flat. But what the hey.

While growing this tree out, please think about doing something about the cartwheel of branches on top the tree sooner rather then later. It looks like it’s creating a reverse taper at that junction.

Also consider how to improve the nebari. Spend this years growing time studying a couple techniques, ground./air layering and the Ebihara method. There are threads about all of these techniques here at BNut. Based upon my experience with Elms, there roots are pretty fleshy, so I might start with studying the former techniques.

Good luck and remember to have fun!

I have noticed the reverse taper at the Trunk-Apex. I was considering potentially doing a Broom-Style or an Informal-Upright in the future after the trunk reaches my desired diameter or even keeping the current structure with some work. I haven't quite made up my mind. Luckily I've got some time. If I kept the current style, I'm unsure of how to go about mellowing the reverse taper without a trunk chop. I do also have a slightly deeper and much wider Mica Pot for training. Is there a particular rot-resistant wood like Cedar used for the wooden flats?

Sounds like you are tracking in the right direction.

My inclination after rushing into things my first couple years and mucking trees up is to take time, study the tree and explore all ideas before moving forward, That way one doesn’t have to look at the tree forever more and have a case of “Woulda, coulda, shoulda’.

Cedar is as good as it gets for grow boxes. Redwood would also work, but it’s pricey and the wood is pretty scarce.

Agreement to getting into grow box or ground to get bigger trunk. Little pots only generate lackluster trunks/results.
S

Mr.Dr.K said:
I will post pictures of the trunk damage. I was wondering on how to address this issue. Leave it be and let the Phloem and Cambium heal naturally or scrape and paste it to prevent further damage
Click to expand...

I cannot see any damage worth worrying about. Just let it grow and it will heal naturally.

Mr.Dr.K said:
Is this tree telling me it's safe to repot with some protection, or wait?
Click to expand...

I cannot see any signs of buds opening in those photos. Chinese elm are quite happy to be root pruned even after the leaves have opened so given you still have some cold weather coming I'd wait a few weeks to save all the hassles of protecting or moving the tree.

The vast majority of Chinese elms are developed by grow and chop so it probably does not really matter if there are larger branches causing inverse taper near the top because that section is likely to be removed anyway. What this tree looks like now is nothing like it will look after a year of growing. Mine change so dramatically during the grow phase that I no longer try to predict a shape. Just grow and chop then deal with whatever results from that.

Thank you everyone for your input. I live in an apartment, so ground growing for me, unfortunately is not an option. Hopefully one day I'll have a place for that. I'm fortunate enough to have a Westward, 2nd floor balcony with an overhanging shelf I built, which provides plenty of light. The current pot ID is 7.5"x5.5"x2". I have a Mica 10"x7"x3". Would the Mica be ok to start with and then pot-up to a larger flat next season? I imagine it'll take a few seasons to get the trunk to where I'd like.
S

Anything larger than the current pot will allow increased growth so go ahead with the mica pot this year.
Pots give slower growth than ground but will still give growth. In my experience slower development usually means increased quality in the final bonsai - less, smaller scars, better ramification and often better taper in both trunk and branches.

Shibui said:
Anything larger than the current pot will allow increased growth so go ahead with the mica pot this year.
Pots give slower growth than ground but will still give growth. In my experience slower development usually means increased quality in the final bonsai - less, smaller scars, better ramification and often better taper in both trunk and branches.
Click to expand...

You're on the right track with a slightly bigger pot and root pruning this year if they need it. The trees are looking pretty good and the internodes appear fairly tight. Are you doing clip and grow?...Keep doing it if you are and start doing it if you're not.

I wrote to suggest you read 'The Hidden Life of Trees' on the NY Times bestseller list. It talks about the holes made by little bugs and how the tree deals with them.

You don't need to scrape and seal the cambium unless you see the holes getting larger. I learned a lot about botony when I read the book. It's very interesting and a fun read.

Ooh cool, that's pretty interesting. I'll see if I can find that once I get a few minutes. since I got the tree, I typically cut it back once or twice a year, depending on growth. At 1st it was more or less to keep the canopy small. At 1st I didn't realize how to manipulate pruning for certain growth results. Now that I believe I have a better understanding of that, I think I'll be able to begin to apply it in the future with better results.
You must log in or register to reply here.