These photos taken in the same year. Background trees appear as different heights because it is difficult to place my kayak in the same place months apart.

The big branch on the right is a little thick, but I like the balance it lends to the overall look. The photo was taken from below. The small branch at the top right may not be arcing upwards. It might be arcing towards the viewer (and a little up). There is a branch in the middle of the canopy that moves to the right then turns and heads to the left. That one is definitely moving towards the viewer.

Bald cypress branches in the canopy tend to meander out from the trunk rather than straight out as you would see in lower branches. Joe Day of Mobile calls these "Cees" and "Jays". One of my bald cypress had an upper branch that would not pop smaller branches in one area. So I bent the branch towards the bare area. Since bonsai artists usually don't put branches on the inside of a curve, the resulting curve looked correct. The curved branch in the photo doesn't have smaller branches on the inside of the curve. I hope this shows someone how bonsai "rules" have a start in nature. 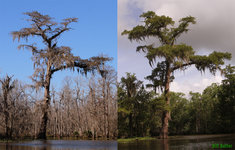