Hello all, I have a question that I can not really find an answer to. Can a Japanese Black Pine be air layered? I have a JBP that I have had for 6 years now, and this past year it has been ruined for lack of a better word. When I received the tree(bought for me as a gift), it was very leggy with no interior buds at all. The branching was very sparse with a long thin trunk. I received the tree late in the season, so I just cared for it without doing anything to it other than maintain it.

I have had numerous other trees, but had never owned a pine. So I did as much reading as I could on them. The following spring, I repotted the tree to check out the root system. It appeared that it was repotted the year before as there were not many roots, or at least what I would consider a full years woirth of growth. So I figured I would let it get healthy for the year and the only work I did on it was to candle prune to try to promote back budding. I did get some new buds on older parts of branches.

The following year I did a repot with root pruning(and there were many more fibrous roots this time). After the repot, we got hit with a hard freeze that was unexpected, but the tree made it through the year. It did not put on much growth at all, and I thought I was going to lose it, but it stayed alive, just didn't really thrive or grow much.

The following year it budded great and things were looking up, but some of the interior buds that were growing died back. I felt like I was starting over now, but that is the way it is sometimes I guess. No biggie, I enjoy working with this tree, even if my work is not the greatest. I continued with fertalizing and pruning/pinching and started to get much better growth, but the tree is still rather leggy.

This past year was going to be the year that I was going to cut it back hard and it was going to be a make it or break it year for the tree. I moved it in the spring/end of winter, from the garage to the back patio. It was sitting on a stoop along the foundation of the house(big mistake).

I went outside and noticed that the tree had been knocked over and was out of the pot. So I put it back in the pot and resecured the anchor wires for the tree. (I had removed the anchor wires when I repotted a couple years ago, and did not reanchor the tree(another mistake). Anyways.....about a week later I noticed that some soil by the base of the trunk was moved to the side or dug out. I replaced the little bit of soil and really thought nothing of it. The tree appeared to be doing well, then after a couple more weeks just as we are really getting some nice spring weather and candles are starting to grow, some little critter decided to eat the lower half of the nebari on one side of the tree. It dug some soil out, and literally ate the roots where they came out of the trunk. So half of the trunk has roots now and the other half has none at all. I thought the tree was going to die, but it has made it through the summer and appears to be healthy.

My main problem now is, without being able to air layer this tree, It will never have a good nebari. I am kind of at a loss as to what to do with it. So after this terribly long post, is it possible to airlayer a JBP? Will a JBP put out new roots in an area that the roots have been chewed off and I would guess that area is essentially dead? I was going to take a picture to show you all, but it is raining like crazy today. If the rain stops, I will get a pic..... Thank you for any info you can give me,

Lets see if this works....I took two quick pics with my phone in the rain. One is of the base where the roots were eaten/destroyed, the other is of the tree itself. If layering is possible, I would layer the tree right above the first branches. 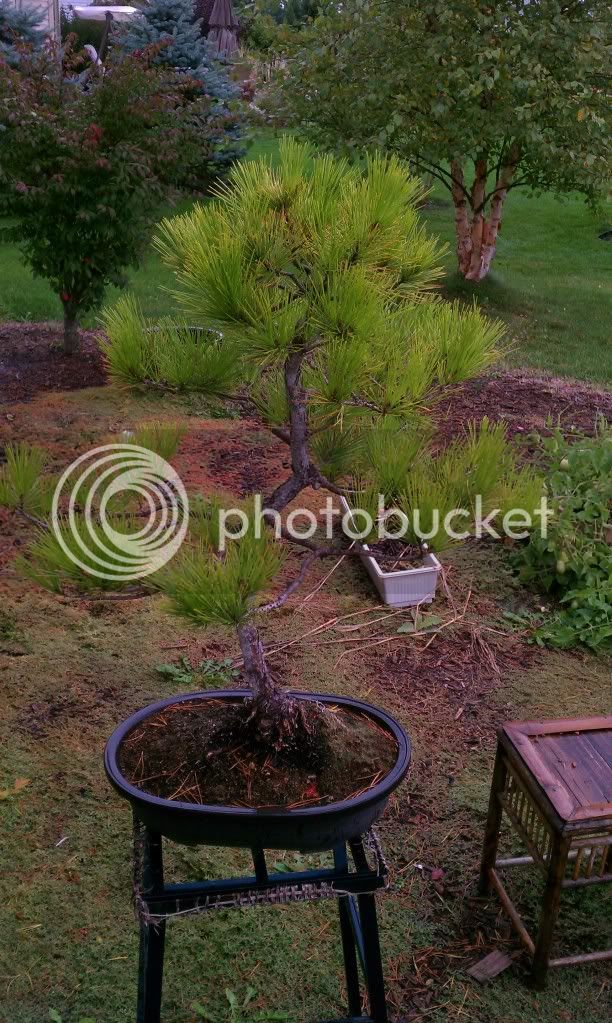 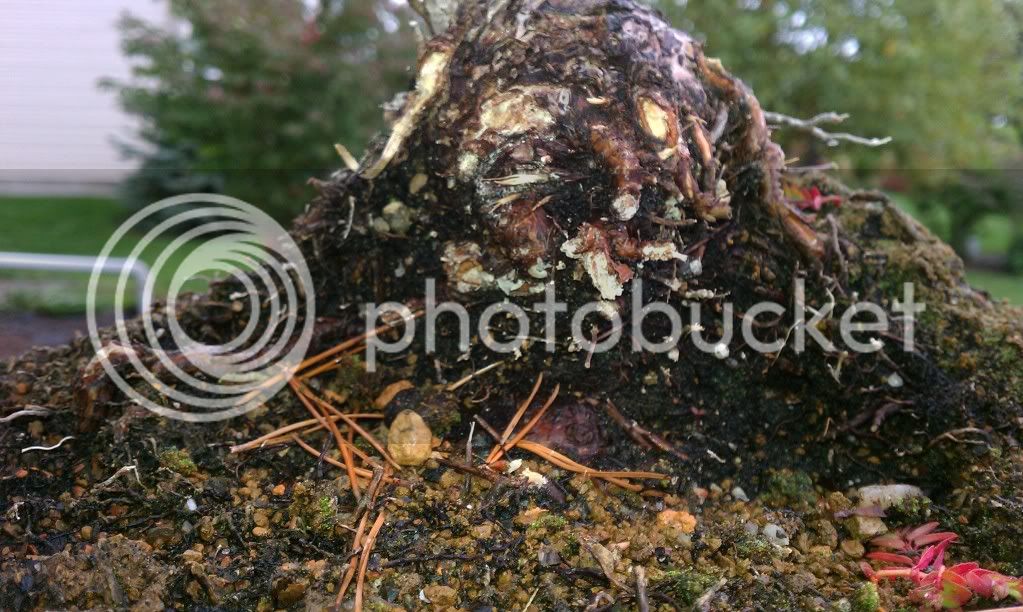 They can be air layered, it'll take a while and you need strong rooting hormone. There are some posts by a member named Graydon on here if you do a search. You may be able to grow new roots by applying rooting hormone to the damaged side. If your tree still has half a nebari could you obtain some seedlings and repair it by approach grafting? Might be the safer way to go and it'd probably take just as long.

First though, buy a shotgun.
I

You posted pics as I was writing. I bet you could fix that by layering just the damaged side. You'll definitely need strong rooting hormone, 0.1% IBA or better.

The roots are still there- I don't think you need to layer it, just bury it further up to the junction of the root and the trunk and put sphagnum moss over that side....i'd bet it will send out more roots from that area where the roots were eaten off. Besides - it looks like the base is too high out of the pot anyway....
H

Can't give any advice on the tree, but will give some on critter control. In the late winter and early spring, rodents (mice, squirrels, chipmunks) will often dig in the soil and sometimes eat the plant. Cayenne pepper sprinkled on the periphery of the soil will deter these attacks with no ill effect to the plant. The pepper can also be applied directly to most conifers for especially determined varmints, but should not be used directly on tender new deciduous leaves, as it may burn them.
J

Thank you for the advice about the cayenne pepper, that makes sense.

The pine is too high out of the pot. It needs a serious root pruning and this year rose up a bit. Plus it was planted a little too high to begin with and then knocked out of the pot, and the rodent problem.....all that has attributed to it being planted too high, but it is too late for me to do anything until next year. I should have taken care of it earlier this year, but my trees were neglected for a period of time this spring and summer, and I never got around to it.

Back the my original question....can a black pine be air layered?

and also, do you think this tree has potential if I can get good ramification?

your tree definetly needs to be planted deeper.
Also, the solution to most of your trees problems, could easily be solved with a restyle.
So forget the layering, buy some wire and work with what you have... I see plenty of potential there.

You should also list where you are from in your profile page, so when you ask for advice, we will know what type of weather and growing conditions you have.
J

I did not know it was listed, sorry. I am from the chicago area....I will check my profile page and change it.

Check out George Muranaka's blog on the subject here. Clearly, the answer is yes...
J

Thank you for the link!

Looking at the photo, it doesn't appear that layering is the solution here. The base is fine, just plant it a little deeper next time as S.A.M. suggested. The tree is skinny and lanky, it needs to grow hard, unchecked for a few years to get some interior buds to pop and work with new growth closer to the trunk.

Air layering a pine can take a very long time (sometimes more than year) and can yield mediocre or bad results. Brian is right on the money--A better, more satisfying solution would be a deeper pot, a restyle, some patience (pines require a lot of patience as they react more slowly to bonsai techniques than deciduous trees) and developing stronger interior budding.
J

I think I will plant it into a grow out pot(I have large pots for growing material out) and feed heavily and let it grow as suggested. It is very lanky/thin, and I want it to thicken, but am afraid to plant it in the ground for fear of it freezing and dying. In a few years I will hopefully be ready for a major restyling and be able to turn this tree into something nice! Thank you for the comments/suggestions.

Eric Schrader said:
The roots are still there- I don't think you need to layer it, just bury it further up to the junction of the root and the trunk and put sphagnum moss over that side....i'd bet it will send out more roots from that area where the roots were eaten off. Besides - it looks like the base is too high out of the pot anyway....
Click to expand...

I agree with this concept, the tree should root where it was damaged and planting it deeper in a larger pot wont hurt it. Let me add; leave it alone for at least three years or growing seasons. It seems in the beginning you were disturbing the roots too often. Pines are not like Maples or Elms, they don't like, or should we say, take kindly to having their roots disturbed too frequently.

This thread is helpful to me.I have several JBP in big pots that have trunks that are too straight and boring.
I've been wondering if I should attempt an air layer on them. I think now that I will give it a go.

bumblebee said:
This thread is helpful to me.I have several JBP in big pots that have trunks that are too straight and boring.
I've been wondering if I should attempt an air layer on them. I think now that I will give it a go.

Let us know how things go. Remember, that the thicker the trunk the longer it will take to root.
You must log in or register to reply here.