A few years ago I was down at @William N. Valavanis 's place and I picked out a juniper that had a long deadwood spike sticking out of the canopy, something I'd been looking for. When I went to checkout he said it was a "survivor". I asked what he meant and he said it was a juniper that someone had worked on years ago in his beginners class. I guess many (most?) of those trees are never seen again, many probably don't survive...but every so often a "survivor" shows up to be re-worked and sold.

Anyway, this thread is not about that tree but about my own "survivor" juniper from the beginners class I took with Bill in 2010 (how time flies). I just completed some work on it - thinning, wiring, styling. It's finally starting to look like something after all these years. Here are a couple of current images. There's still a lot to be done, but I need to get some interior growth going to replace some leggy branches. Also, some of the cascading areas are quite weak. Hopefully opening up the canopy a bit will help with that.

Two similar views from near where the front would probably be. There are 2 cascading branches - the rear one ends in deadwood. I've covered up a back branch with a dark shirt...trying to figure out if I need it. Don't think so. It comes off the trunk at an awkward angle that doesn't really look very attractive. Right now there is a bit too much of a gap between the apex and the cascading foliage masses (more visible in second figure) but I have options to move/grow out branches to handle that. 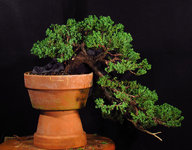 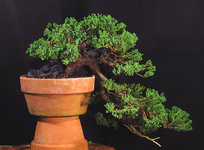 Here are some historical (hysterical?) photos.

First after beginners class back in 2010. Yikes! 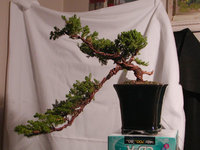 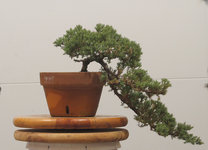 I kind of lost interest in this for a few years and pretty much just let it grow, would cut back longer branches periodically. Didn't take many pictures. Really didn't have a good handle on how to style a cascade. Somewhere along the way I used a piece of rebar to adjust one of the cascading branches but I don't have a photo of that stage.

This last one I was able to find was 2017. By this point I was settling on this as a front and trying to decide if I wanted to keep both cascading branches. I figured I could always remove one later, but once it was gone...you know. Anyway, if I can find any other photos I'll add them later. 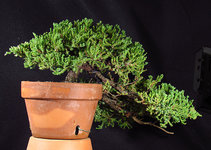 Gives me hope for my very first juniper I rescued from a grocery store and made into a cascade. It also largely gets neglected and left to its own devices at times
You must log in or register to reply here.