I purchased this tree from 'Bonsai Outlet' on 6/12. When I received it, I did a very light prune and this is what the tree looked like after watering and placing outside for the first time. 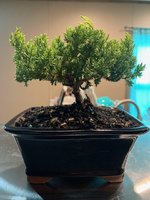 After two months of watering once daily, the branches have grown a lot, but these last two weeks have developed some browning tips? They appear to be dying. I have not fertilized, and there does not appear to be any insect issues. I plan to repot in spring to a much larger pot to develop some trunk thickness. The temps here in NC have been low 90's during the day, and low 70's at night. Am I missing something? 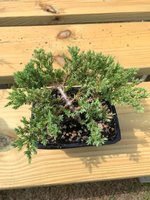 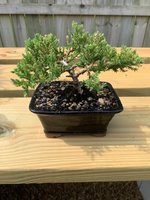 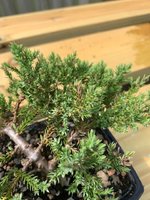 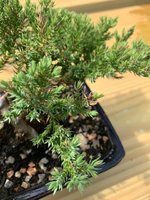 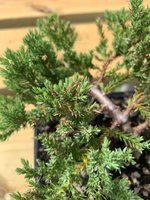 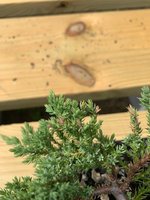 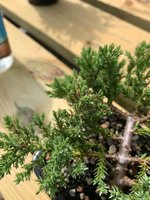 Check it for spider mites.

I did the paper test, and did NOT find any evidence of spider mites. Although, I did find some worms that appear to be inch worms? Could they be the issue, and how to prevent? 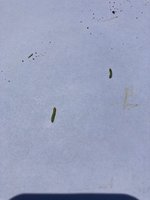 There are larva of ? that eat bud tips. These could be the buggers that did the munching.

I can't tell what the buggers are. They could be moth larvae, of a bud-moth. Or they could be a fly larvae, in blueberries we have blueberry maggots.

Any broad spectrum treatment should work. Step one, use a moderately forceful spray (jet) of water, just physically blast the bugs away. That might do it.

An insecticidal soap, like Safer's Insecticidal Soap, works as an anti-feedant. You spray forcefully to knock of as many as you can, then the soap causes the remaining larva to quit feeding, it gives them terminal insect diarrhea.

Neem oil in a formulation that lists it as an insecticide, can be used to knock down these buggers. Note: Neem oil has been modified for so many uses, it seldom is the "original" oil from the neem tree which was both insecticidal and antifungal. Read the label, make sure it says it is the version meant for insect control..

Pyrethrums work pretty well against most moth caterpillars and maggots. They are safe to use as they break down in sunlight, and they are relatively safe for humans.

If all else fails, there is imidaproclid, a powerful, not bee safe, systemic pesticide. Bayer and Bonide have formulations available. I would avoid this option, but if you have it on the shelf already, it will work.

After clearing out all of the worms (larvae?) from the foliage, they have not appeared to come back as of yet. Although its only been two days. I'm still quite worried whether this tree will survive. The browning foliage is quite evident today, and may be worse than it was two days ago. Any ideas how to proceed? Should I prune the dying foliage? 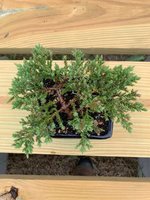 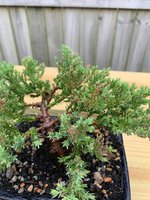