My order from the Missouri dept of conservation came in, which means its Forest season!

Prepared up a nice and deep pot for the plum forest. Ended up having more tie wires than I needed because many of them had almost nothing to tie too. Just tied in the three biggest trees. 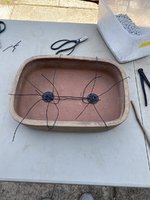 and here is the finished product. Definitely will prune some of these down to keep some trunks smaller. 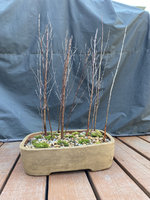 Wow! I got a 10 pack of wild plum from the Missouri Department of Conservation too. I'll have to go look at them again...I remember mine being scrawier than those.

I honestly don't know why I got them, hehe. Maybe I'll make them into a forest too and we can have a friendly competition to finally decide which side of the state is better
You must log in or register to reply here.