Tigerbark ficus, purchased as a $10 mallsai (2 year old rooted cutting) in 2014, developed over the last 8 years into it's current form. Tree was in a bonsai pot last year, branches were then eaten by squirrels. I returned it to a grow pot to develop the nebari more as well as to focus on better quality rammification. Next year it will essentially be "finished." I expect branch density to increase 2 fold next year. There is also quite a lot of nebari and base flare, I purposely buried the tree deep to thicken the surface roots a bit more. 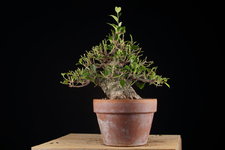 New primary branches wired last year (before squirrel attack, one mistake is that the right branches are too long. Better to focus on quality and density of ramification then to worry about filling the outer silhouette too early): 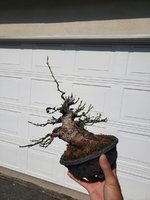 After ground layering in 2016 to grow new nebari: 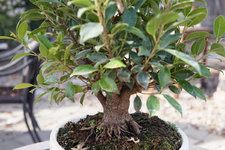 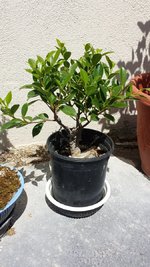 Killer job with this tree.

Excellent ficus! Very well done.
You must log in or register to reply here.