I do sell them. Mostly through the one on one workshops I offer in early summer but I typically have some available. I collected 65 trunks this past season with a 90+% success rate. I live 90 miles south of Charlotte.

@johng , Can you send me a private message with more info? I’m definitely interested in getting one.

nuttiest said:
What about rocking or swaying the trunk often?
Click to expand...

This is hilarious, but...

I am thinking of bending the trunk in different directions throughout the growing season. But these experiments will require a really big pot and resistance points to attach the tension leads.
and multiply my only bald cypress.

This entire experiment has been kinda already done, all of the BC that I have posted on Bnut have been grown from seed and have always been grown with the roots submerged to the top of the soil. One of them is from 1986. Lots of swelling at the base, knees, and some fluting, but not much.

Has anyone tried to grow them in anaerobic conditions? i.e. more or less the exact opposite of what we normally want to do with our trees? We're talking slimy black organic muck with no inorganic particles; you press on the muck and bubbles of hydrogen sulfide rise to the surface?

Bonsai Nut said:
Has anyone tried to grow them in anaerobic conditions? i.e. more or less the exact opposite of what we normally want to do with our trees? We're talking slimy black organic muck with no inorganic particles; you press on the muck and bubbles of hydrogen sulfide rise to the surface?
Click to expand...

I did but not on purpose. The BC died. There is a limit. BCs respond to an organic rich O2 poor substrate by growing a larger root system but near zero O2 will kill it.

Flood, drain, repeat. That's my advice on bald cypress development. Any development you wish to do on the base of the tree should be done first while ignoring the rest of the tree. When you're happy with the base (and maybe a knee or twenty), the tree will respond well to cutting-back and pop out branches.

These trees were collected and potted in 2019. The tubs are built from restaurant bus tubs. The experiment was designed to test the effects of flooding on roots, knee production, and base flaring. Some trees were to be flooded year round, some trees drained from March to October, some trees drained from October to March, and some trees drained year round. The problem is that the first year after losing a child is rough, but years two and three make you give up on your daily routines. As a result, trees that were drained year round are all dead. Some trees were drained for half a year and then I plugged their drains and wished them well. This year has been looking better and I've started watering and feeding and giving a damn.

Meanwhile, some not-so-bad things have happened to the trees. 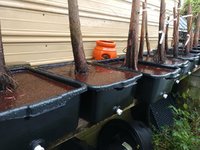 The tubs were built with a piece of hardware cloth on the inside of the plug. The water was initially treated with a microbial anti-mosquito agent. Years later and the tubs don't grow mosquitoes. Maybe the microbes are still in there doing their job or something else is going on. I take mosquito control seriously, but if I don't see the wrigglers, I don't treat for them.

The trees as they are this morning:1 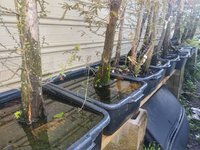 Pots were turned around for the first time this year. The plugs are facing the inside of the bench. 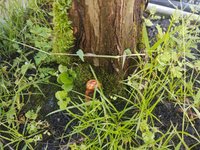 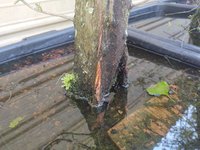 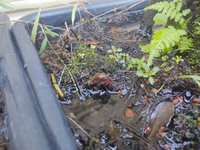 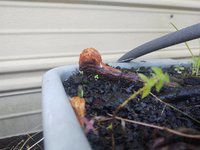 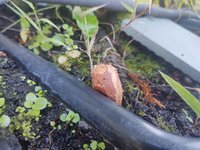 The hope is that getting into a flood/drain cycle will encourage both knee and base development.

At some point, one of the trees went to seed. 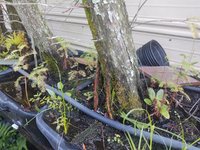 This tree has an incredible amount of moss. It will stay there for a long while. 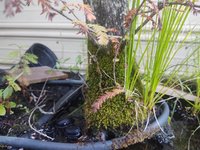 This tree had a bizarre reaction to not being fed and watered this past Spring: 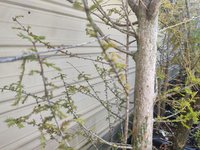 The foundation of the experiment is a loose understanding of the roll that plant hormones play in the development of bald cypress trees. This was bounced off a botany professor who told me that I was in the right ballpark of understanding. My undergraduate degree is in Computer Science and I have an MBA. Studying plants is a hobby. This list represents a rudimentary understanding:

From the understanding, above, the theory behind the experiment is too complicated for a backyard experiment. Serious funding would be required. That said, here it is: Trimming on bald cypress bonsai is counter productive to knee growth. Periods of flooding and draining encourage the growth of knees. The mass of a tree's base can be increased through flooding, encouraging the production of schizogenic tissue.

My apologies for not continuing the experiment beyond the first year. However, some nice things did happen all on their own.

Another photo. Some of my trees were collected beneath power lines. Crews come out and just tear out the trees when the trees grow too large. This helped to explain why the new growth was growing in a neat line. 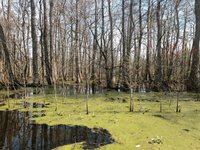 Bald cypress trees can be submerged any time you want. You can have a tree in well-draining soil for years and just set it down into a tub deep enough to cover the roots with water. The tree will not suffer any ill effects. I've done this with trees when I go on vacation. Then I forget to take them out of the tubs for a month or a year. They stay happy. The roots may respond by fattening up a little and looping out of pot. While not being bad for the tree, it may affect your styling goals.

Not recommended: I pulled a tree from a friend's lake in February of 2020. It had very little soil left on the roots. The tree was kept in its black plastic garbage bag and dropped into a trashcan filled with water. It languished there in my driveway until this past Spring when I pulled it out of the trashcan and potted it in one of my flood/drain tubs. The tree perked right up. A smaller tree in the trashcan for the same length of time actually seemed to thrive. Bald cypress will put up with a great deal of abuse if they stay flooded. Abusing the tree is not the right approach, however. Give them some soil and a little love.
You must log in or register to reply here.

B
Simulating seasons for natural growth and dormancy patterns
2

E
Who is your single source of truth on bald cypress care and styling techniques?
2