I'm a big fan of deciduous conifers and have a few cultivars now. I thought it would be fun to compare and contrast: 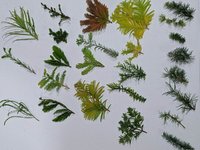 I'm not going for leaf reduction on any of these, so the relative sizes sort-of reflect their natural state. That said, this is by no means a scientific comparison. For example, Kool's Gold had a rough transit this spring and is still recovering -- probably closer in size and color to Gold Rush when healthy.

As for favorites so far: