I like to show you the progression of my Spiraea. It was a very cheap tree, bought for only 5,99 euro. My choice of this Spiraea was based on the very small leaves this species has. I gave it a try.
I bought it as a small shrub in dec 2016. It was less than a meter in height. 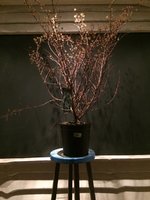 The choice of the front was based of the nebari and the way the small trunk moved. After the first prune, there was not much left; only a small trunk of about 6 cm in height. 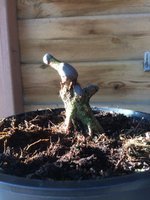 A also repotted it in a big plastic container.
In the first growingseason It shooted very well: this was in the end of june: 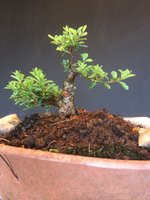 This was the result of the winterpruning, in january 2019. I also repotted it now in a smaller container, after I cleaned and pruned the roots. 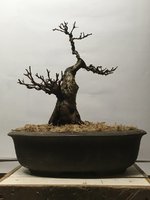 I wanted to "build" the tree with a minimum of branches needed for a good bonsai: one at the left, one at the back, one at the right, and a top:
In june 2018 I reached that goal. 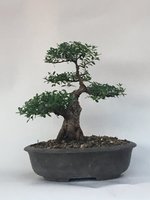 Later that season I changed my mind; first I wanted to make a formal Japanse style Moyogi. But my new goal was a more naturalistic, European style. So I had to grow more branches upward. August, 2019: 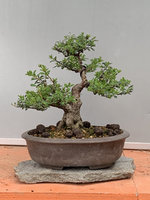 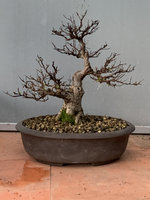 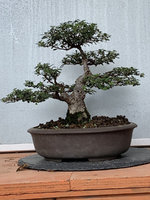 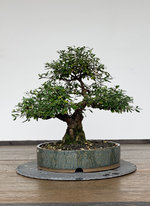 Now in dec 2021, after it lost his foiliage, I did the winter pruning again. Every year a bit more refinement. 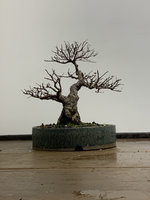 And ow, I have never seen a tree species with finer branches than this Spiraea. Take in consideration that this tree is only a bit less than 20 cm!

I also made a virtual so show my goal of this tree: 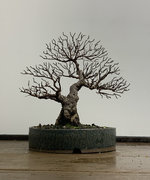 i just repotted this tree in a more suitable pot, made by yaruki. Happy with the result! 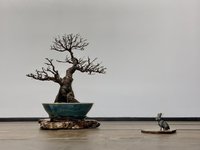 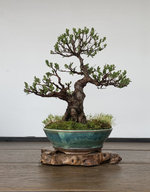 Really cool to see the progression as well as the changes you made along the way when deciding to go in another direction.
You must log in or register to reply here.