My grandfather didn't talk much. Neither did my grandmother.
They were hard working people who had been robbed of their youth, their inheritance, and everything they owned by the second world war.
They had nothing, but they persisted. My gramps was a grumpy guy, harsh, solid as a rock, no emotion. He had four things that were important to him: his two hands, his family and his employees. If he had and his family had to go hungry so his employees could eat, he and his family would go hungry. He was the worst businessman I have ever known.
At one point, not long after the war, my grandfather started a contracting company. He would build houses, people would pay him, he would pay his employees and keep the change for himself. Simple business. But he wasn't good at negotiating and he was even worse at estimating and calculating costs. He rarely made a profit.
But this was post-world war II. The people had nothing, so sometimes they'd pay in services, in paper, in meats or goods. After a year of hard labour, my grandfather finished building a house for a poor family. He knew beforehand they wouldn't be able to pay, but he did the work anyways and paid his employees from what he had saved from previous jobs. "People need a roof above their head, I don't give a damn if they have money or not. We'll figure something out. But first things first." he said.
After the house was done, the customer wasn't able to pay. So my grandfather told the man: "Sir, you don't have much, but now you have a house. Make it your home, feed your family and don't tell anyone. We'll figure it out. Just. Don't. Tell. Anyone. There are people around who do have money, and if they know what I'm doing here, they will want to take advantage.".
Even his employees didn't know this ever happened, they got paid as usual from Gramps savings, and his own family had to live on water, beets and some bread for another week.

Some five years later, the family in the new home returned to my grandfather. They saved up some money but it was nowhere near enough, not even close. But they did manage to buy some woodland on the edge of the village. A piece of crap swamp full of Alders and some lost oaks. Gramps, trusting his two hands, asked them to make him the owner of the patch of forest and all the family's debts would be paid in full. No questions asked, no discussion, no trade-backs.
The family agreed. Of course they agreed! This patch of land was worth roughly a single cow, and you'd need twenty cows or more to buy a home. This was a steal!
The village heard about this as the word got out, and they started making fun of my grandfather. The guy who traded a house for a swamp.

But after a while the people started going quiet. The word also got out that there was a guy making pristine wooden shoes. Some of the best in the area! And mind you, you wore shoes on Sundays when you went to church, the rest of the time was spent either on socks at home or in wooden shoes outdoors. Since everybody was (re)building, farming, paving roads, or doing some other kind of work where you'd need solid wooden shoes, the demand was insanely high. So out of the blue a guy popped up who made wooden shoes that would last you two to four years and he asked a reasonable price. This guy was my grandfather, who picked up a second job besides his work as a contractor and employing a whopping 15 people. Back then everybody was religious. On sundays after church, he would secretly fell a tree, saw it to bits as quietly as possible and take it home in the evening hoping nobody would see. Then the rest of the week after work, he'd carve wooden shoes out of the dried logs. His employees got them for free, everyone else would have to pay a fair price.

My uncle took over the contracting company but has recently retired, ending a legacy. One of the hardest things he ever did in his life, and now two years later he's still kind of depressed that he had to do so. My grandfather died in the 1990's. But the swamp is still in the family, now passed down a generation. Every christmas me and my dad go out in the frozen swamp and fell a couple trees to heat our fireplace. To keep this legacy alive, I took a couple alder cuttings and a whole bunch of seeds. I also scouted some hawthorns and birches - no idea how they got there - that I plan on digging up come spring. Since our climate is starting to get drier and drier, the swampland might die out entirely within the next 10 years.

I plan on making an alder clump, like the ones my grandfather left for us, like the ones we see in his native landscape. The trees that helped feed a family of ten. The hawtorns and birches are a fun bonus.

Thanks for reading! More updates will follow as soon as I have time to select and stratify the seeds and IF the cuttings do anything. Literature says that Alder softwood cuttings have a strike rate of roughly 40%, and hard wood cuttings have a strike rate of less than 1 percent. So this is a long shot, but hey, at least I have a roof above my head and something to look at in my free time.

I had some time. 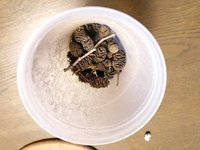 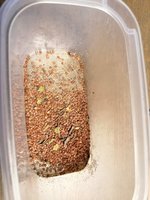 After a good shake. 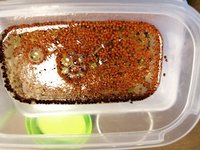 Time for a bath. 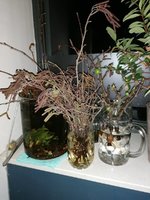 While the rest is already soaking.

I figured I have a terrarium and a plant grow box with 1 watt/cm2 of LED. Let's see if we can skip dormancy.
W 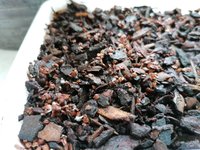 Make sure you keep them moist! When i germinated Speckled Alder.. I used entirely inorganic soil.. i noticed the root system tried to ramify complexly, radial.. right off the bat.. the result was no taproot or vertical root system.. but spiderweb complexity in the tiny root hairs JUST at the surface.. and seeing as my soil was inorganic.. they dried and died rather quickly.

Just sharing MY experience to add to your “arsenal”.. i know your soil is different and whatnot.. I just thought it worth mentioning.

I got them from a swamp, they're in a 100% organic soil because I want to prevent tap roots by drowning them. No holes in this pot either. But it is a bit on the deeper side so I'll have to overwater to both keep the radial roots as well as to stop them from drying out.

Soooo I think we both came to the same conclusion, from different starting points. ;-)
I like your thinking!
W 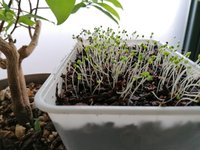 As expected a lack of proper light causes them to stretch. It is what it is. Plenty of seeds for a do-over in spring.

Wires_Guy_wires said:
View attachment 348469
As expected a lack of proper light causes them to stretch. It is what it is. Plenty of seeds for a do-over in spring.
Click to expand...

Are you able to watch them closely enough to drop a light within 4-5”?

Nope, no lights except window sill sunlight. If there is any sun.
Yesterday I saw the first blue sky in a month

Well that’ll do it!

Wires_Guy_wires said:
Yesterday I saw the first blue sky in a month

yeah, those were wonderfull two minutes
You must log in or register to reply here.