Here is another tree that I will be starting progression threads for to track the development over time. This one was a collected specimen from korea. Somewhat rough when I bought it about 14 years ago. Worked on developing it for some years but it had around 10 years of pretty much being ignored but kept alive with the minimum amount of care toward advancing the tree forward. Now I have been getting my trees back on track and wanted to document where it its today.

I just finished fall pruning and wiring on this. I made a few approach grafts last growing season. I have some long leaders I plan on using for more grafts next growing season. Some older branches need shortening others need to gain length. As I either get back budding on a branch or graft a branch I'll shorten then when appropriate.

I this had not been transplanted in probably 9 or 10 yrs. I plan on transplanting in early spring Tho it grew so will I wish I could just let it grow another season for the branch development. But oh well.


This is the earliest picture I have. Circa 2007 You can see how little the branches have developed in such a long time but health and life circumstances made in not possible to care for my trees for a long time. None the less the one thing I did accomplish over that time is to graft a new apex onto the third trunk ( on the right) to shorten it. It was too long and made the design to heavy on the right. I custom ordered the pot from Sara Raynor to fit a shortened tertiary trunk. 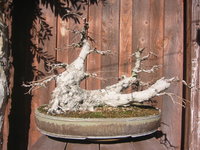 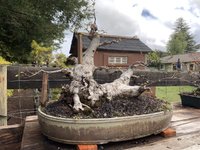 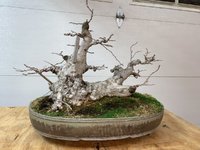 Here you can see a large scar I left on the back from work needed soon after I got the tree. 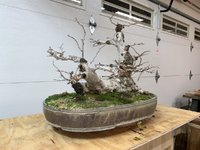 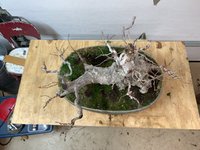 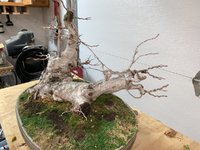 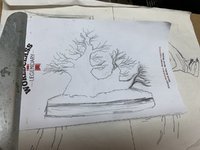 Cool material. Such a shame you just left it to be in the garden!

May I suggest looking a few years further, and aim more towards deciduous rather than coniferous crown? 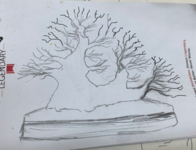 leatherback said:
Cool material. Such a shame you just left it to be in the garden!
Click to expand...

No doubt. But there was no other option. I even thought about selling my collection after many years unable to give them time. But even that would have taken more time than I had to give them.

leatherback said:
May I suggest looking a few years further, and aim more towards deciduous rather than coniferous crown?

Yup! Never planned otherwise. My sketch is just a rough guide ( as stated above) I just roughed out the basic structure on paper but the fine ramification is already in mind. Thanks for the updated sketch!

Here’s an example of a an amazing beech beech that is helpful. I use It for reference.

yeh it looks to have had a real hard life in that blank period. there is one on kaizen that might be a realistic goal in 3-4 years if fed and watered properly 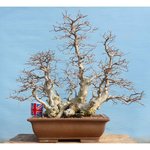 BobbyLane said:
there is one on kaizen
Click to expand...

You have a different site than I have. This I cannot find.

Yeah, graham has some insane stock for sale. This sort of raw material usually carries a decent price tag though.
M

I think its been eight years since this was last transplanted (way too long) . This last growing season the tree grew well enough but I did notice the soil was not drying out a well as in the past.

It felt awesome to do this!

The roots were not as bad as I thought they might be but not as good as I hoped either. there was a decent amount healthy roots but i definitely lost some fine ramification of the roots over the time it went without repotting. The pot had never filled up like i though it would have been after so many years. I though there might be roots wrapping around and around the inside edge of the pot but It was not that full. I believe I planted it with a mix of 70% akadma 30% lava/pumice last time. This time I did 50 %Akadama /50% pumice (and a smattering of pine bark). More drying out and oxygen will likely do wonders for the vigor of this tree. I don't want crazy growth out of this. More like a medium rate of growth to allow branch development to progress..but not coarse growth. In the end I did not shorten the roots as much as i might if it was going gangbusters. But hopefully in 2 years the tree will be steaming along and i'll be able to shorten some of the roots a bit more to get that finer ramification in the roots to get going..

the left side the rootball was pretty skimpy root wise. I think it may have been to close to the side of the pot. I barely touched that area. So I hope to get some improvement there. May have something to do with the dead rotten part of the main trunk on that side.. The bottom of the root ball is very flat and clean. previous repotting allowed me to really address that part of the roots. no large roots at all.

Lastly, i ended up rotating the planting angle to get a better separation of the 3 trunklines from the main viewing position. It required placing the tree in the pot that left the right side very much toward the rear of the pot and a lot of open space in front of it in terms of soil. Not sure if i'll keep it the way but i'll revisit next repot. 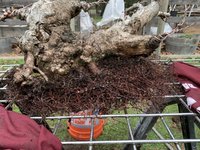 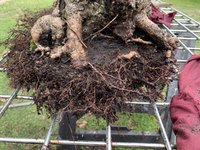 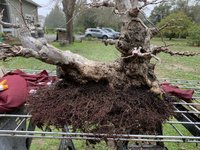 after footwork was completed 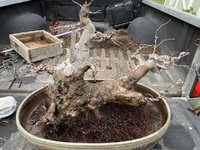 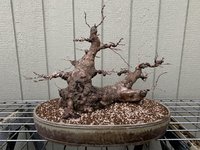 Great tree! But it seems to me that over all those years you didn't get much branch growth/ramification. Looks the same way sparse as at the beginning. Maybe it was due to not repotting?
M

R3x said:
Great tree! But it seems to me that over all those years you didn't get much branch growth/ramification. Looks the same way sparse as at the beginning. Maybe it was due to not repotting?
Click to expand...

Thread 'Hmm. didn't really think i'd ever find myself posting about my bonsai again.'
https://www.bonsainut.com/threads/h...d-myself-posting-about-my-bonsai-again.42863/

Malix said:
Thread 'Hmm. didn't really think i'd ever find myself posting about my bonsai again.'
https://www.bonsainut.com/threads/h...d-myself-posting-about-my-bonsai-again.42863/
Click to expand...

I see. Wish you best of luck.
You must log in or register to reply here.