Trouble with my Chinese elm

Hello! I'm very new to bonsai and my Chinese elm is not doing very well recently. I'm going to include as much detail as possible to get ahead of follow up questions, so this might be long. The bulletpoint issues are:


I got this bonsai in early October from my grandmother in law as a housewarming gift and I was immediately like "oh no thank you, this is a responsibility" but then I really liked it so I thought I'd try to take care of it. He did really well until last month. I kept him on a shelf in an east facing window all winter. At first he started dropping leaves and I kind of freaked out but I just let it happen and all the leaves came back lol. So then when he got more yellow leaves on occasion I would just pick them off when I noticed them.

When the weather started to warm up, I noticed he started to get brown spots on his leaves that were unlike when his leaves changed colors and dropped, so I got worried that he was getting burned and I moved him to a southern facing window. I don't know how well he did in the southern facing window because his leaves seemed fine except that for SOME reason moving him made my cat decide she should eat him and he lost a lot of leaves that way. So about two weeks ago I moved him to a taller bookshelf that she couldn't get to. It's on the wall opposite the window he was originally in; it's like the only place in the house that's high enough for the cat not to reach that also gets light. Maybe 8-10 feet from the window, I can't remember the dimensions of the room.

He hasn't gotten the same kind of brown spots that he was getting when he was directly in that window. His leaves are staying green, but they're very dry and all curled up. I water him when the first like half inch or so of soil is dry, but in the past when I've gone too long without watering and his leaves kind of curled up, I saw them get better very quickly after watering. I watered him a week ago and I didn't see any change in his condition between now and then. I'm really a very cautious waterer because I've read that they do better with underwatering than overwatering, so I usually feel the soil and then water a day or two later. I'm also nervous about watering him because his soil has been taking a much longer time to drain than it used to and I'm not sure what that's about. I mist him...when I remember to.

Oh, lastly, I haven't fertilized him since like October/November and I used just the bonsai fertilizer that came with him. Can't remember what company my grandmother in law bought him from.

I've attached some pictures of how he is right now and the way his leaves look after they come off. The pictures were taken a week ago but his condition has not changed. 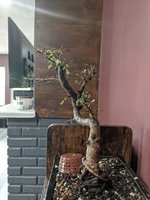 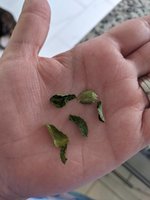 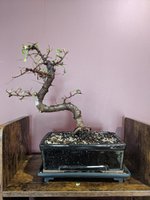 What I THINK I should do is repot him and/or move him outside. I wasn't planning to take him out until summer, and when he started doing poorly I was worried about moving him again and stressing him out. It's been two weeks since I disturbed him in any way except to water him, so I'm thinking maybe it's time to move him? Here are my questions:

Greetings traveller! Sorry to hear that your Ulmus isn’t feeling well. I believe that the “keepers” of The Woody Dwarves may be able to aide his ailments. You were right, to venture to the TinyForest In search of answers. We gather, and share... knowledge, experience... it REALLY is a grand time.

To the matter at hand.... the phrase, ,terminology or even idea, really, of “Indoor Trees” is quite dangerous... Because in MOST cases.. what’s MEANT by this phrasing is simply “Trees that can SURVIVE indoors for the times of the year it would perish outdoors.” Basically “..can be wintered indoors...

Ulmus Parvifolia is a zone 4 tree...

Get him outside (If possible). THIS is most likely his problem. ONLY indirect sunlight at first, plants can’t wear SPF protection. ..

You are definitely right thinking that the soil IS an issue.. a BIG one.. but NOTHING near being indoors.. (unless South-Facing with much supplemental light, humidity controls and a contained, ventilated area with lots of airflow.. but don’t worry about THAT)

I wouldn’t repot.. he’s hurting... a repot would push him “past bounce”, in my opinion.

Get him outside.. try an’ get that beast healthy... you only want to be “working” healthy trees.

Pleasure to make your acquaintance.

IT needs to go outside!

Bring it outside, do not attempt anything dramatic, such as repotting or fertilizing. It needs to get healthy as a first priority. There’s a lot going on here. Good luck.
J

Did the tree make it?
You must log in or register to reply here.

Azalea-wars 2 Determining Signs of Trouble - From an inquisitive person