Now here is one to stump you! While hiking in Tampa, FL, I came upon some type of tree I can't identify. Anyone have an idea what it is, and if there is bonsai potential? The leaves are interesting teardrop shaped with an attractive reddish color on the new growth. The adult leaves on the large trees are 2 inches long and about as wide.

It does look a lot like Cotinus - smoke bushes. I see there is one native to southern USA. These leaves are a bit more pointed than usual but that may just be juvenile growth?
It is possible to bonsai but not desirable because they have large leaves and do not ramify very well.
M

This is a mature tree:

It might be a black poplar (populus nigra).
P

Nice bark. Pretty leaves. Some might say leaf stems too long but with such pretty leaves and great bark who cares

This is definitely not a smoke bush. All the photos I can locate online are not demonstrating the growth patterns this one has, and the leaves look much bigger. This one appears to ramify like a maple. It is also a full sized tree, with one adult looking to be at least 50 feet tall.
Here is what appears to be a 5 year old specimen that I was thinking about collecting:

The first photo shows the trunk with some interesting bends, about 2.5 inches thick.. In the second photo you can see some of the structure of the branches. Once the leaves harden off they turn green.
M

The poplar is closer to the mark. The general structure of the leaf is close in some images, but this tree has very delicate leaves with very smooth, well-defined edges. Does the poplar new growth come out with that red color and harden off to green?
S

Matt B said:
The poplar is closer to the mark
Click to expand...

have a look at Chinese tallow - Triadica (Sapium) sebifera. I see one of the common names is Florida aspen - probably because of the leaf shape. It appears to be a invasive exotic across southern USA which would explain its presence where you found it.
M

Bingo! Chinese Tallow it is. Now, what do we know about it? Will it make a good larger bonsai specimen, given the long leaf stems? Can leaf size be controlled?

Looks like Chinese Tallow.
It is an invasive exotic here in Florida, so have at it with nothing to lose.
be careful if you go hiking further south, the young leaves on poison wood are similar, and you will probably be punished for touching them.
S

I have not grown it as bonsai but I believe it does not ramify well so you may have difficulty making dense branches and apex. Maybe a bigger tree will be OK.
M

Well, it seems to ramify quite well. I trimmed the main trunk 3 weeks ago leaving a large branch as the new leader. At the trim site and at various locations on the trunk, there is explosive new growth.

Matt B said:
Well, it seems to ramify quite well. I trimmed the main trunk 3 weeks ago leaving a large branch as the new leader. At the trim site and at various locations on the trunk, there is explosive new growth.View attachment 304295
Click to expand...

Sorry to be a little nit-picky but the description of this growth is backbudding not ramification. Ramification is when individual branches divide from primary to secondary and tertiary branchlets.

Here are some examples of Chinese Tallow bonsai: 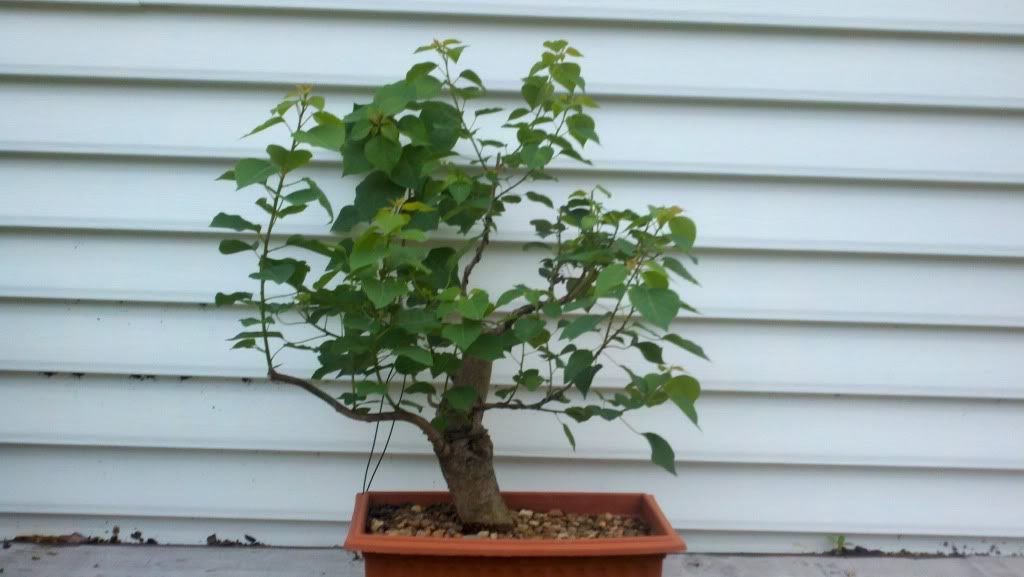 You'll notice on most of these trees (Especially the forests) the branches don't really divide much beyond some thin secondary twigs. This is what @Shibui was referring to about not ramifying well.

The one with the triangle canopy and tannish-grey pot looks quite dense and ramified though, so it must be possible somehow. Anyway, its some good inspiration for ya. Good luck!
Last edited: May 21, 2020
M

Yes, that third photo is very attractive, although it does not really get cold enough here to give a fall display like that. The forest looks etoliated from lack of light, or like it never saw pruning. The rest of the subject tree I photographed seemed to display a dense growth pattern, and was not leggy or etoliated despite growing in a low area between a dense forest and an embankment. It looks like its location gets only a few hours of direct sun. I'm sure with pruning, the backbudding it is exhibiting now will produce dense branching with equal alacrity. Next time I head out that way, I'll make a few passes with a branch cutter on that new growth and see if it can be coaxed into creating dense branching.

Do any of you see any benefit of running a ring around the base of the plant with a reciprocating saw to cut any large roots and encourage it to grow a closer and finer root ball to aid in harvesting it next year?
S

Cutting roots can be useful preparation for collecting but most people cut way too far out. Almost all new roots will grow directly from the cut ends of the roots so if you cut 2' out from the trunk you'll need a 5 or 6 ' box to put it in after digging. Most discover their error when the tree is dug then have to cut all the roots back harder which removes all those precious new feeder roots. Most trees still survive the process so why bother with the root cutting? Why not just dig and prune straight away?

If you do decide to try trenching make your cuts less than 6" or 1 trunk thickness away from the trunk so you will end up with useful and collectible roots.
Chinese tallow is pretty tough, hence the weedy status. It should be OK to just dig and transplant even with really short roots and no visible feeder roots.
M

Thanks for the tips. I would have been one to cut too far out for sure.

I recently collected a maple sapling with a 1/2 inch trunk by trenching an 10 inch plug of soil, only to later discover that my sapling was in fact just a sucker extending from a 2 inch diameter parent tree root about 5 inches below the surface. This was at least 20 feet from any of the adult trees. The sapling had no roots of its own, and died.

Any tips for trenching bald cypress? I found a particularly ambitious project for next year with a 3 inch trunk that flares to a massive 6 inches at the foot of the tree. I found it with the trunk broken off about 4 feet high, and chopped it to around 2.5 feet a a month ago, and it is back budding quite well. Would the 6" or one trunk width apply on this large a specimen? Would it help to trench only one side now and the other half in a few months to give each side a chance to grow feeder roots?

Very good question.
I don't have access to wild BC over here. I have to grow them from seed or cuttings so know almost nothing of collecting wild ones.
In general trenching relies on the deeper roots sustaining the tree between you cutting the surface roots and new lateral roots growing. Provided the tree has some deeper roots 360 trenching should be fine. If in doubt half trenching or pie trenching (cut alternate sections leaving uncut roots between) would be safer. Is it possible to dig a bit and check?
I have noticed that trees growing in waterlogged ground often do not have deeper roots.

@BillsBayou collects some BC's.
Mine are both from nursery buckets.
My experience with them is that you can basically saw 85% of the roots off of a healthy specimen and it will recover no problem.
I keep mine flooded in water tubs for about 5 out of 7 days per week.
M

The area I will be collecting the tree from is on the edge of a seasonally flooded woodland consisting of 80-90% bald cypress. Here, cypress create domes usually centered around a depression that floods yearly, with the oldest trees in the center and young outside. This tree is from the outer edge of such a dome, and I doubt it floods for any more than a month in the most rainy time of the year. The rest of the year, it is a dry area. Some of the older trees in the center of the dome have massive bases that flare out so much that it forms a nearly flat table at the hight that the water floods in the wet season. Sadly, this area was logged some time in the early part of the 1900s so there are no truly gargantuan trees, but in another 100 years or so, our decendants can look forward to seeing some real heavyweights.

With the tree I will be collecting, I chose it for the flareing trunk base. I suppose in order to create a tree with some interest, I will have to cut that trunk a bit lower, and train a leader that I will allow to grow uncontrolled. Once that branch thickens, I could change the angle of the teee at a repotting, creating something that does not resemble a baseball bat.

If this were your project, where would you start, and at what point would you dig it up to continue its refinement?
M

Well, I decided to cut it down further. I'll let the small branch take off, and see where it goes this season.