I think I promised some time ago to post a few photos of valley oaks that I've been growing for the past 7 years. I collected the acorns in the fall of 2004 and planted them on the occasion of my son's birth, in March 2005. I can't say that the results so far really impress me. I grew up in Mendocino County where the oaks were spectacular, thus they are part of my consciousness, embedded in my childhood memories I suppose.

I think I have another decade to go before these might be ready for show. In any case, some people have expressed an interest so here are a few photos.

The largest of them, I planted the acorn in my back yard in SF and let it grow for 5 years, chopping once and then again when I dug it out. I had tried to induce roots by girdling the trunk with a wire, but the tree grew over it leaving a circluar scar. In the future I plan to replant the tree in the ground to further thicken the trunk, when I do that I'll girdle it again (with a more effective method) so that I start to get a good root spread. The first photo is from January 2010. 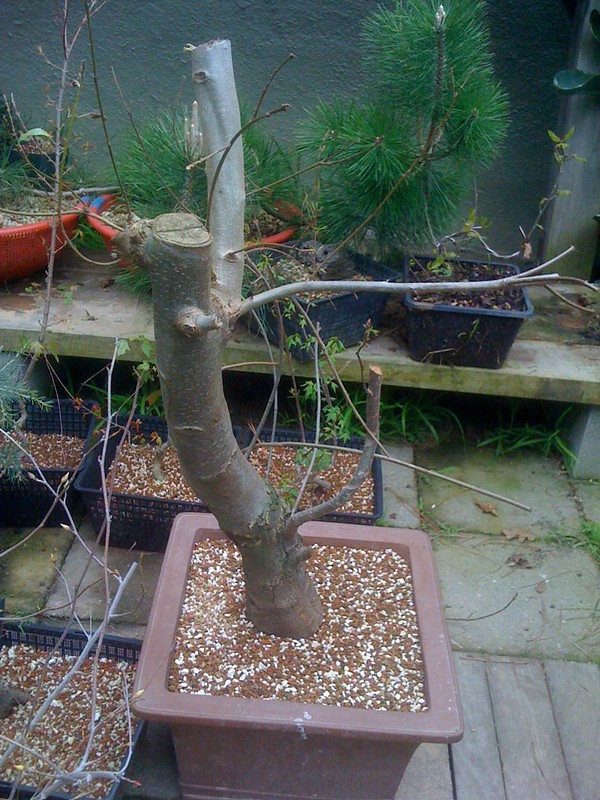 The same tree in March 2011. I wired some of the sprouted branches right as it was leafing out for the year. I'm growing them to show in winter so I'm hoping at least on some that I'll manage to avoid the scars that this one has. 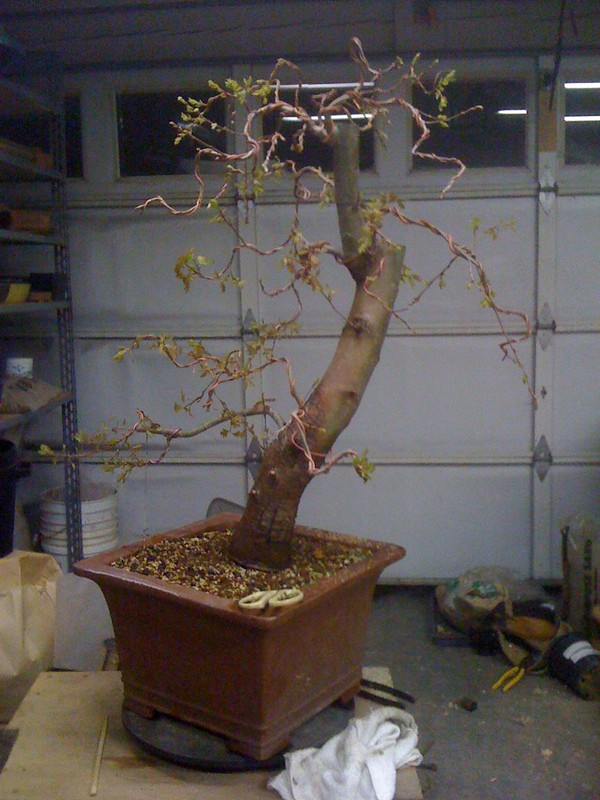 February of this year, the tree leafing out, I wired more branches over the winter but neglected to take photos. These trees grow in pots but don't really make wood like they do in the ground. The branches get finer and the trees grow much less vigorously. 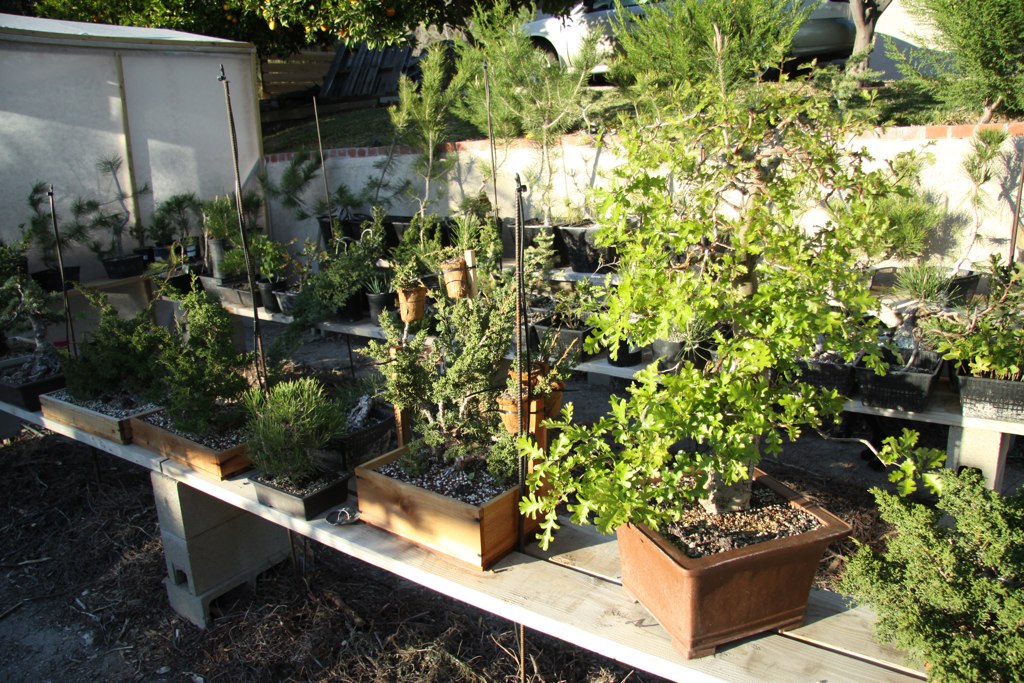 Earlier today, the tree grew okay this spring but not as vigorously as I might like at this stage. I'm still having nutrient issues even with all the effort and fertilizer that I've put into it. 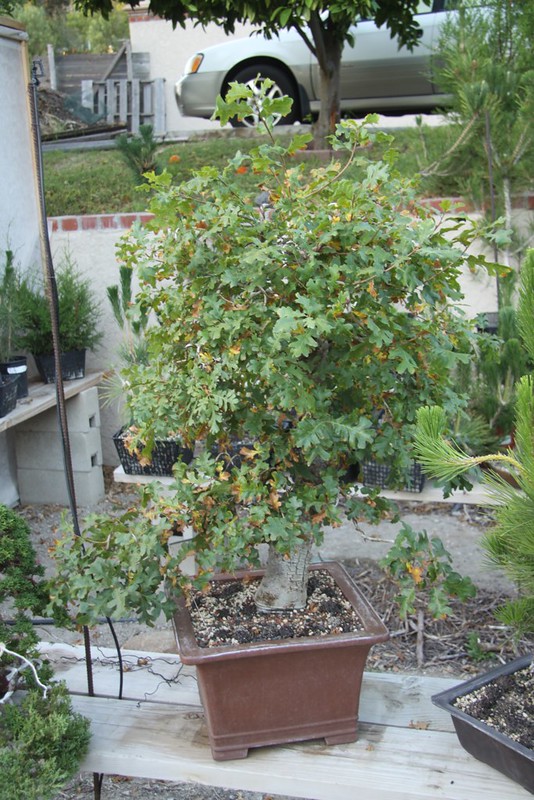 Leaves that are falling off right now 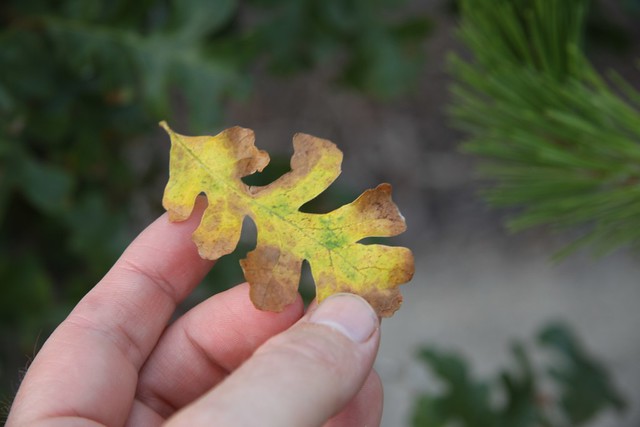 Base of the tree, starting to show some bark. I'll have to ruin some of it to fix the girdle mark and get the root spread started. 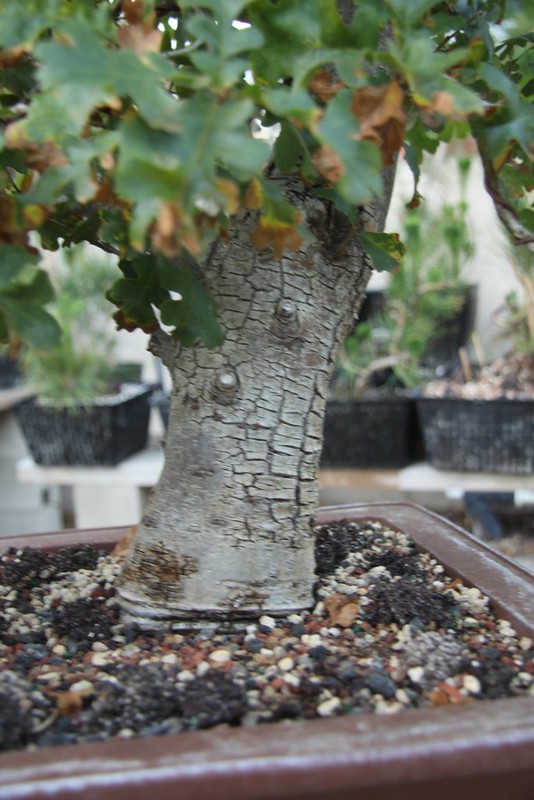 I have seven other valley oaks in raised beds at the moment, and a few more from this batch in containers. None of them are nearly as large, but they have better root spreads, smaller scars and better branch structure so far. 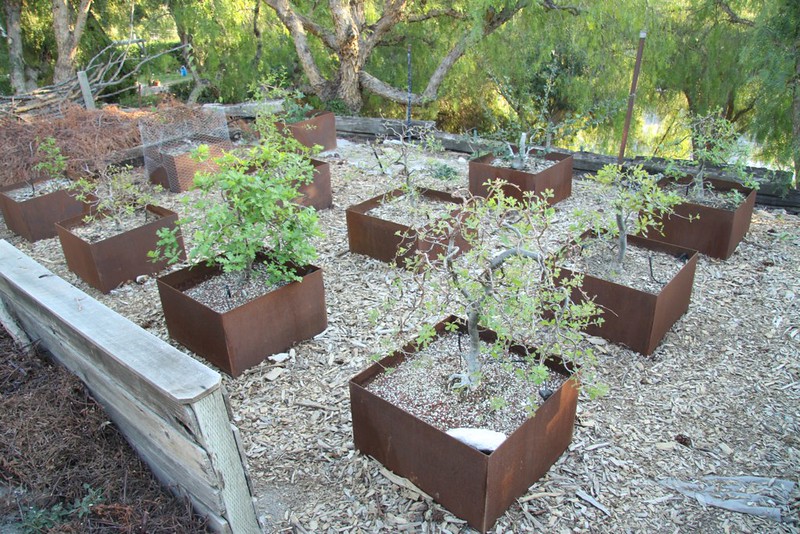 Cool trees! I love Q. lobata! I think it's the nicest of the oaks. I know the leaves are bigger than Coast Live but they have a lighter green in the spring and look nicer to me. The bark is also so much cooler when it ages.... Gets that puzzle piece look. I think it's well worth the larger leaf size. Way to go!
Ian

very nice i hope to find one one day.Do you have any for sale

Very nice! I would love to get my hands on a good valley oak, as I really love the leaves. Right now I'm working with a willow oak, which doesn't have the traditional "oak" leaf shape. Good luck with it!

Nice project!
One of my favorite bonsai is my Valley Oak.
The leaves reduce quite well with ramification.
Paul

Nice work Eric, I love Valley Oaks and think they are great for Bonsai. Thanks for posting.

Yes, good progress on a cool project. I like how you're building the basic form. Really kind of amazing for only seven years from seed! Nice pot.
One can only imagine what seven more years will bring.

It does me good to see someone else with more trees in boxes and pond baskets than bonsai pots. The ones in your grow bed...What is the container? Metal?

Bonsai Kid - not really selling them. I started with 35 and lost a few along the way, some on purpose, others not. Since I started them in the ground rather than containers I think the initial dig was harder on them than it may have been otherwise. Anyway, you're quite a way out of their natural habitat - look for some trees that inspire you in your neighborhood and collect some acorns.

Jay - the containers are 4 pieces of 3/16" steel welded at the corners, open on the bottom. At one point I had planned my garden to be much more modern looking but my cheap and practical side took over and it became less so.

I have one 2year old oak seedling i dug out flower bed a few years ago but the leaves are very large.What ive read about these Quercus lobata Valley Oaks are that there very hardy and could handle the worst weather ill ever get around here plus leaf size is much smaller plus i love the bark too so i plan to buy one some day and give it a try.
G

I found a few good valley oak pics, some of a big tree that lives down the street, and the other is a bonsai I have been working on for about tens years (from an acorn~12 yrs ago)

The tree is in the ground next to some other random trees and a few left over beets. At this point it has gone through some serious trunk chops and root reductions and I am waiting to see what it does. I am thinking it may make it down around eight inches some day! Any way the trunk is aging well and the leaves are beginning to reduce, but the rest needs work. and time.

I'd just advise that you keep in mind the structure of a mature oak - the branches do not conform to the typical bonsai style and techniques. If you trunk chop and start with small branches you will have something that looks more like a bonsai than an oak - IMO the branches need to be big and gnarly so take the sprouts that you have there and wire them until they set in place then let them run until they're 1/3 the size of the trunk. Meanwhile, to ease the transition out of the ground you might want to excavate around the tree to sever some of the roots and keep it well watered at the surface so that you get some new fine roots close into the base.
G

For that tree I am not really going for a traditional upright oak look(I had not been training it to set up low branching previous to making the bonsai decision) and as such the old gnarly branches aren't there. I have in mind a tree at work that was lightning struck and goes form a huge old base with lots of deadwood, to a much younger tree on top. But I do have it in a raised veggie bed right now with great soil and lots of surface water and in a month or so a bit of afternoon shade.

You can be shared compound in including the following What does not?

Since I last posted about these trees I've dug them all out of their planters and put them in wooden boxes for transit back to San Francisco.

When I dug the trees out there were multiple roots headed down around the boards under the trees. I had been watering them just like a bonsai so there were also good feeder roots above the boards.

They grew this past season but not as well as I had hoped. In my experience with this and other oak species I've found that after root work the trees almost alway take a year off from any serious top growth. These trees put out a few shoots but nothing strong or large.

This particular species also seems to make almost no wood while in a container. I've had wire on these since before they were dug out of the ground and there has been no need to remove it. To encourage some faster growth I'll be planting them back into raised beds in the next month or so, but for now a bit of wiring and trimming.

Here is one of the trees before work today: 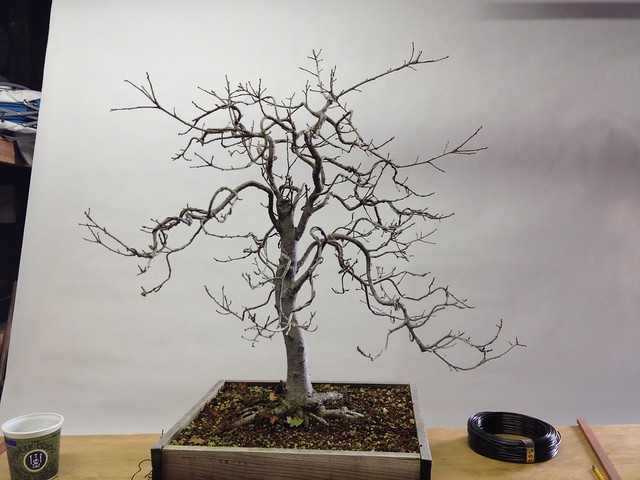 and after a bit of light trimming, a few wires and a few guy wires: 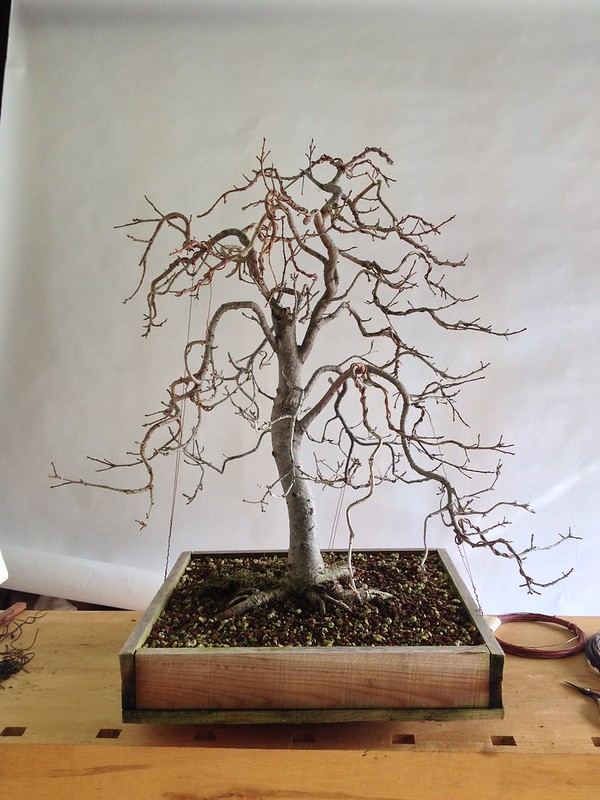 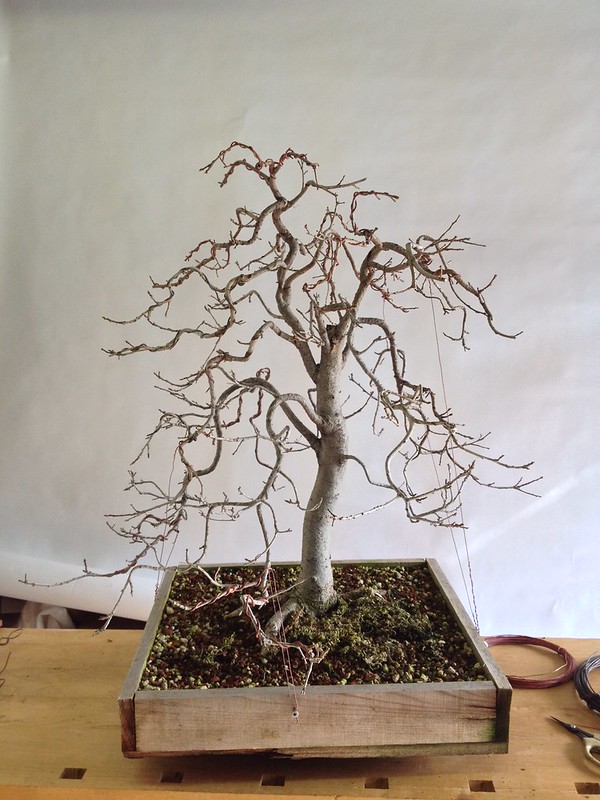 I'll post a couple more as I have time to take photos and trim them.

Inspirational. This is how the ancient oaks in my area grow. The structure is there, and it seems all that is left is development and aging.

I love this. I'm glad you updated it as I didn't catch it before. Oaks are such an iconic tree, you've really captured this in your tree.

I agree! I especially like oak because it's a species that we have not been influenced on by Japanese Bonsai(well at least as much as with most other type of trees). I love looking at the ancient giant oaks in CA. They have incredibly beautiful branch structure and deserve more attention as Bonsai. Eric- It's nice to see your trees as the start of quality examples of the Oak style in Bonsai. I think this is a species that is unique to the U.S. It will be really cool to see this tree several years down the road. I started some Valley Oak acorns last year my-self.

Thanks guys, I'll post some more when I have a chance.

Eric Schrader said:
I grew up in Mendocino County where the oaks were spectacular, thus they are part of my consciousness, embedded in my childhood memories I suppose.
Click to expand...

It's amazing how trees from childhood stick with us. I would love to one day capture the essence of the Scots pines I spent so much time around every summer growing up in Michigan. Tall, top heavy, lopsided, broken branches most of the way up the trunk. The form doesn't follow typical bonsai rules, but the tree is beautiful.

Side note: Please inform me if replying to an outdated thread is frowned upon in this forum. I participate on forums that pay no mind to time, but I know some get picky about it.
You must log in or register to reply here.