What makes a bonsai American or Japanese style?

What makes a bonsai Japanese or American ?

If the label is written in Kanji, it's Japanese. If in English it is American.

The differences are many, but difficult to describe. The aesthetic is completely different. For example if japanese is traditionally written right to left, movement in Japanese display more often is right to left. USA displays tend to be left to right. We write english left to right.

There's many cultural cues in each style. In Japan for example, flowering plum, JBP and bamboo often are displayed together, even if the elements might show up in a scroll, or as a kusamono. The trio is from a traditional Shinto ritual. In the USA rocks and cactus show up as accents as a reference to our arid mountainous west. A skull, as in Georgia O'keefe is likely to be at least one in every USA show.

Many cultural references are different.

Wow... you ask a lot of questions for a beginner!

But to give you a brief answer, the Japanese prefer highly refined bonsai. Lots and lots of twigs and ramification. No scars on deciduous trees. Great nebari. Many of their trees exaggerate these qualities to show off their technical abilities, and on the process don’t look “natural”.

American bonsai tend to strive for a more naturalistic look. It’s rare to see a “pancake nebari”, for example, on an American tree. Part of the reason is it takes years and years to achieve the forms the Japanese favor, or can make.

In the end, however, it doesn’t matter. A good bonsai is a good bonsai. Some of the arguments about which style is “right” is silly. It’s like arguing who’s style of painting is better, Rembrandt? Or Van Gogh? Or Leonardo? Or Monet? They’re all great! Just different.

Bjorn says there's no such thing as American bonsai as a style.

@Njyamadori
Over the course of time, you will get familiar with different aesthetics. Eventually you will be able to glance at a photo and know that the artist was North American, distinct from European, you will recognize Japanese styled trees as being different from Chinese style trees. Vietnam has its own unique aesthetic, as does Korea. I can't tell Malaysian trees from Indonesian trees, yet. But the more shows you attend, the more photos from shows you take the time to study, the more you will be able to notice the subtle differences between bonsai from different aesthetics.

Also, as a culture, the Japanese tend to be conformists. They don’t tend to want to stand out from the crowd.

Americans, on the other hand, pride themselves as individualists. They prefer to strike out on their own, rather than follow the crowd.

My personal taste is more in keeping with the Japanese aesthetic. I’m often criticized on this forum for “following the rules”. I suppose that’s because my early encounters with bonsai came from pictures of Japanese bonsai. 50 years ago, there wasn’t any “American bonsai” to speak of, with the exception of some in Southern California. I live in Georgia, so I never saw any, and the one I did see were these huge California Junipers that don’t resemble any kind of tree that occurs naturally around here.

So, in my mind’s eye, the Japanese aesthetic is what I think bonsai should be, and that’s what I strive for. You concept of what bonsai should be may be totally different!

Leo in N E Illinois said:
@Njyamadori
Eventually you will be able to glance at a photo and know that the artist was North American, distinct from European,
Click to expand...

Well if Bjorn can't see how "American Bonsai" is different, I doubt it's a style.

There are styles of trees like informal upright, broom, cascade etc.

Anything else is just where the artist is from.

Adair M said:
Also, as a culture, the Japanese tend to be conformists. They don’t tend to want to stand out from the crowd.
Click to expand...

A yet they do in all of the Japaneseness.

one_bonsai said:
Bjorn says there's no such thing as American bonsai as a style.
Click to expand...

The concept of “balance” is different between “Japanese” and “American” bonsai. 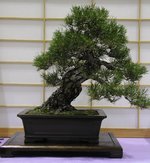 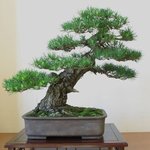 They both lean to the right.

one_bonsai said:
Well if Bjorn can't see how "American Bonsai" is different, I doubt it's a style.
Click to expand...

That’s why I asked this question. He said he doesn’t know what American bonsai is compared to the uk who copy the Japanese

Adair M said:
Wow... you ask a lot of questions for a beginner!
Click to expand...

I try to get good knowledge about bonsai

At this point, you don’t need to worry about “styles”, concentrate on the basics: wiring, repotting, etc.

I lean more toward what @Adair M said in his second post, though I would say a great deal of that American individualism he spoke of is actually an appreciation for the uncommon or the provocative.

American shows might include trees that are either inspired by an odd tree the artist saw once or that exact tree as yamabori, and the wonder inspired by the site of it and your imagination trying to comprehend how it grew that way is the artistic objective.

From my point of view, the objectives in Japanese bonsai are to create a stylized, perfectionist depiction of a tree from nature, or to showcase the skill and control over the tree of the artist. Japanese bonsai, while always impressive, also often seem almost cartoony to me.

British bonsai I always count to be a bit in between. Not as exaggerated as the Japanese style, but taking a heavy cue from it. I've also noticed they sometimes do exaggerate the pads of foliage a bit. I imagine it's a throwback to the European tradition of topiary, which, in potted form, is arguably its own independently evolved form of bonsai.

I think we mean Naturalistic... not "American".
I've never referred to Naturalistic as American.. why would I, Americans do not own the style.

Surely, its Naturalistic vs Classic/Abstract (also widely referred to as Japanese) style?
Apart from the name, all the stuff said above by Adair, applies. In my view.
Unless there is a whole style in of itself, called American?

In regards to your original question, nothing makes it American or Japanese, there is no such thing. You mean, what makes a tree/bonsai, a naturalistic style or Japanese style, I think?

This illustrates the differences, at least in Apex, quite well. You get the drift.
Then there is also the distinction between Style and Form... That's a whole other thing for people to argue about, in another thread (as they have done).

To add some light heartedness to things.. they are differentiated in my head by thinking "Japanese/Abstract = big puffy clouds of foliage, making a tree a bonsai" and "Naturalistic = tree. Making your bonsai look like a tree"
Ill let someone else post the good old quote about making your bonsai look like a tree, not a bonsai.. someone's got it in their forum signature round here somewhere....
Or there is @ShadyStump 's
"Bonsai = cool tree in pot
Don't over think it."

Leo in N E Illinois said:
If the label is written in Kanji, it's Japanese. If in English it is American.
Click to expand...

This being said, the basic rules of "Japanese bonsai" largely apply to the "Naturalistic" style or any other : it's mainly about trying to find a kind of inner harmony that can epitomize what you can feel when watching a beautiful tree in nature. We can all post tree with opposed or over-twisted branches, looking uninteresting or totally un-natural like topiaries : why not after all, if it is a way of expressing something and is appreciated by some ?

Sometimes, the boundaries between what looks "natural" and what looks artificial can vary, from one culture to another, from one fashion to the next trend.

But basically, from my point of view, most of the time, a "good" bonsai" should look natural. Chinese penjing is a kind of exception that to me combines the two : a feel of natural tree and some sort of "fantasy world".

I think inspiration from chinese penjing can open up new horizons for international bonsai. We now live in a global culture, and actually it's not new : we all are the produce of our differences, our origins, our cultures. 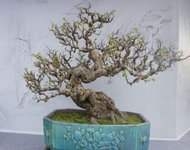 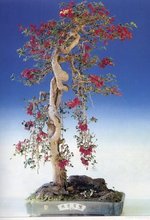 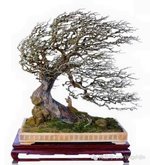 I certainly think there is enough differences in aesthetics and local trees that are used for regions to have their own styles.
Some of the deciduous coming out of Europe is quite distinctive, as mentioned above in Japan they prefer scarless trunks but scars, dead wood and hollows are gaining real traction in EU.
Pierneef is a distincly African style, so much so if you saw a tree of any species styled like that your first thought would be Africa.
Australia is developing a unique style too. But I think it is mainly all responding to the material being used, differing regions will no doubt use different material and offer up a uniqueness of sorts.

Njyamadori said:
What makes a bonsai Japanese or American ?
Click to expand...

I think there are two primary things that would define this.
1. Species--If you are working with a species that does not exist naturally in Japan, then you would have an American bonsai.
2. Style--There are many styles defined by the Japanese that have a traditional Japanese feel (except Bankan) that I have listed below from the resource

To be American, it needs to be a style that would exist in America and not in Japan. My idea was the Krummholz...Almost all of the mountains that I have hiked and viewed in Japan have thicker forests even in the tops...so the Krummholz style is not seen...but I have not been in the Japanese Alps area near Nagano...so that may be true either....

I think more importantly is, "What is the Niyamadori style"?

??
You must log in or register to reply here.