When to Slip Pot Bald Cypress?

I picked up this small BC from my local nursery the other day and have had it growing in my pond since then. The soil is, of course, a potting soil looking mixture. It came from Meehan's Miniatures, by the way. Anyway, I wanted to know if it would be fine to slip pot it into a pond basket with the same kind of soil it is in now. I want to bury the ugly, exposed roots that are sticking out of the trunk. Then, next spring I would repot into turface. Yes or no? 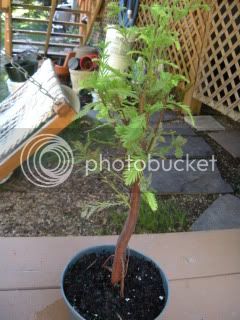 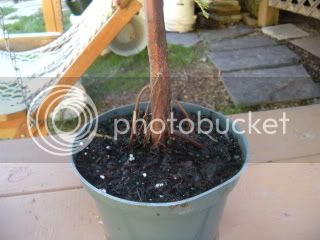 Burying those roots will only create a bigger problem to correct later...reverse taper. I'd leave it alone until you repot in the spring, then remove the aerial roots when you're sure other roots exist to sustain the tree.

The biggest lesson I've EVER learned in bonsai is this: 99.9% (or higher) of the time I lose a tree, it is because I've done something to the roots at the wrong time.

Don't do anything to it now. Those roots should be removed completely next spring and repotting should be done at the same time.

If you start messing around with the tree now, especially with pruning, you could stimulate new growth which will be killed off as winter comes. Slip potting now probably won't cause any problems, BUT it could if you're transplanting into a mesh pond basket--which doesn't provide as much root protection as a solid container. The tree can wait for spring as-is with fewer concerns.

Let it alone, find a sheltered place for it to overwinter (once it has dropped its leaves and after it's been hit by two or three hard frosts). I put my trees into winter storage (including the Bald cypress)around Thanksgiving.

Oh and if you're thinking of 100% turface for the soil next spring, think again. Your tree won't like it. It drains and dries out far too quickly for BC. I use an opposite soil mix for mine--70 to 80 percent organics (including potting soil) and 20-30 percent coarser material.

Thank you both, I will not slip pot this tree. I thought about removing those roots next spring, but then I thought about how much of the tree they are supporting, and I couldn't decide what to do. But now, I will remove them next spring.

Quick question, how would removing the roots create reverse taper if I leave it that buried? Thanks!

Because the arial roots will supply the trunk above them and thicken the top above faster, while the trunk below won't get anything from them.

The roots are there because the grower planted the original cutting too deep in the container.

Those roots aren't thick enough to cause any harm if removed next spring. The longer you wait to get rid of them, the more dominant they may become and removal becomes more and more problematic.
K

What happens when the roots get really thick and fuse?

Here it is again,this time with visitor.

There would be nothing wrong with putting this tree into a larger pot now, assuming few roots were disturbed. Add some bone meal over the winter and it will concentrate its winter energy into its roots.

And don't be in a hurry to remove those roots. They may be the ones you want to keep for surface roots by planting the tree deeper in the soil come spring.

Oh hello Jim and thank you. But now it seems I am getting conflicting information. I thought about the whole surface roots thing, but I had not considered the reverse taper it could 'cause. Hmmmm

Get rid of the roots. None are useable for several reasons,-they're not all at the same level, for one--which is a considerable problem in developing decent nebari in a BC.

Second, they are not necessary for the tree's survival. Left alone, they will not get any better at being useable, but will create inverse taper and screw up that trunk you paid for.

Instead of leaving them, work on the real root mass --the one with roots actually in the soil that have more potential in developing a decent basal flare.

I for one would be keen to see a swamp cypress grown with the wrong taper,i can't imagine it.

Klytus said:
What happens when the roots get really thick and fuse?

Here it is again,this time with visitor.

Those aren't fused roots in your photos. That is a buttressed trunk. With age, Cypress growing in water develop that way.

Cypress on dry land generally will have a fairly straight trunk with a slight flare at ground level.

Oh for Pete's sake! The roots won't cause reverse taper -- at least not for several years -- if at all. I've grown dozens of these over the years, including some that looked much like this one. You don't have any idea what the roots in the soil look like. It may well be that you will cut most of them away, and use these as the surface roots, wiring them into place. BC can easily stand cutting away 80% of the root mass. These roots are large enough to start creating some basal flare at that point.

Oh for pete's sake, if you let those roots get domiant, you WILL see less basal flare development lower down. I've also grown BC for a number of years. "Arial" roots on a BC aren't a good thing, even if you have close to no roots at the base. This tree looks to have at least one dominant root at the base to work with and probably more--the owner needs to examine the bottom root mass to see exactly what's there.

Scraggly roots connected willy nilly to various portions of the trunk two or three inches above the soil line are not going to create basal flare. They will mostly do nothing but look ugly and possibly get thicker at the expense of existing basal roots. At best leaving those things will create a novelty tree.

There may be girdling roots below soil level.

So, do I leave the roots or remove them?

Redwood Ryan said:
So, do I leave the roots or remove them?
Click to expand...

Leave it alone until spring, then remove them when you repot. Take the time to correct the nebari when you repot...it may slow down the development of the tree for a year, but you will make it up over the next few years when you can focus on fattening the trunk knowing the nebari is in good order.
You must log in or register to reply here.

I have a couple year old bald cypress the roots are coming out of the bottom of the pot should I slip pot or what?

Nursery stock juniper - slip pot in larger basket or not?
2