Has anyone out there had experience(good or bad) with repotting a Cedrus atlantica in autumn/fall?

Have you ever a had a single branch on a Cedrus atlantica die?

Did you explore the root system and what were the results/findings?

Hi Grant. Well, I have plenty of bad experiences. Not a single branch died, but the whole thing. Killed plenty, every which way. I have killed a nice big blue atlas even after 10+ years of work. Nothing but heartaches these things.
From what I have learned, they don't like severe root pruning. They like dry, compact, sandy mix with little organic material. They don't like chemical or acidic fertilizers. The best people to ask are Jim at JimGremel.com and Brent at EvergreenGardenworks.com . Hope Brent would chime in here and give you some tips. Jim Gremel has got some of the best atlas cedars I have ever seen anywhere. He is probably the best in the USA on this species. There are a few pics of his trees on his website, but you just have to see them in real life to fully appreciate their awesomeness.
Good luck to you!
Si

I'll ask Jim on Saturday for you.

Forgot about your question. I'd say no, don't repot in the autumn. Forgot you're from down under. Late spring would be better for any root work. But whatever you do, do not root prune too severely.
Good luck!

Thanks for your replies.

I think the main problem encountered with growing Cedrus Atlantica in Australia is that many have tried to grow it in humid coastal environments and coupled with mild or hot and humid they just don't like it. They do Ok in cooler and humid conditions OK though.

Where I live in Australia it is at higher elevation(2,000 ft) and hot/dry or cold/dry normally.

Light root prune may be OK but I would like some more info.

Oh Man, Cedar's are screeming sirens for me. Luring me into their beauty only to die in conditions most tree's do fine in. I would have to say do your root work in the middle to late winter when it is still cold and then put in partial shade. I would never do any root trimming in the fall but that is just me. I'm on killing my second one right now but I think it will make it. It's one of the rare green(ish) Atlas cedars the last of Brent's collection. Short of going to the Atlas mountains of Morroco I do not think you will find any green ones around anymore in the US.

All I can do is share with you the kiss of death on these things and that is unsifted soil. If you don't sift your pumice and red lava rock and your source has allot of dust, they will get root rot and die. First the aphids and ants will invade and then you will realize why they are there.

Concensus seems to be not to repot in Fall and be careful of potting mix.

My additional points are to grow in colder climate and not too humid.

PS trying to upload a photo of a pretty wild looking cedar that has come into my care. Looks like I suceeded.

WOW! That's a masterpiece Grant! That's one of the most original bonsai I have ever seen. It must have been trained like that since its beginning and not some lucky yamadori find. The curves on this tree are very well done, original lines, and very pleasing. I don't see a bad a curve in it at all. The foliage is such healthy and blue too! Very beautiful!
Thanks for showing it.
Si

PS. The pot is slightly too big for this thin trunk. A smaller pot would make this tree look grander and older.
Last edited: Mar 15, 2011
B

Cedars still tend to be problematic for me, but I will share what I have learned. Jim Gremel has also had problems, especially lifting them from his field. We have come to different conclusions, but I really haven't tried his method.

After lots of experimentation, Jim has decided that the best time for HIM is in late spring after the new growth has extended. He says that sometimes they will even wilt, but then recover. We had this discussion about four years ago, so it may have changed. You also have to consider that Jim lives just a few miles from the ocean in Redwood country, so his climate is vastly different from mine at that time of the year. He has very mild conditions with fog, while my place is baking by then.

Most of the transplanting I have done after the new bud break has failed. I prefer to rootprune and transplant while they are still deeply dormant. For my zone 8, this after Christmas and the month of January and perhaps early February. Later than that, defoliation will occur. I have had completely defoliated trees recover, but it really sets them back. You must keep the root pruning to a minimum, always making sure that a good portion of the root ball is untouched, such as slicing off the bottom mass and loosening the outer roots, but not working your way into the rootball. Doing a total rootpruning and soil change should happen over several years. I have a monster C. atlantica that needs this badly and I have already missed the window for this year, so I will probably just slip pot it for this year and try again next year.

Some other points and observations: Most of the blue Atlas cedars that you come across are grafted to Deodar cedar (C. deodara). This makes things a bit easier because Deodar is nearly bullet proof, but still requires the above care when root pruning and repotting. You may get away with a bit more, but I wouldn't press my luck. When working with the other Cedrus species on their own roots, be extra careful. Planting cedars in the ground has led me to believe that part of the problem is soil temperature. Whe I put cedars in the field, it is usually late because that is when I get around to it. Last year, I planted 50 C. atlantica from small pots into my field of fairly heavy clay in April or May. These were very root bound and I just sliced off the outside and bottom roots with shears. I didn't have time to mess with them. Nearly all of them survived and are getting ready to bud out for this year. I have had the same success with grafted 'Glauca' blue atlas cedars in the landscape. All of them have suvived. In each case however, I have left a good portion of the rootball intact. Had I planted the little cedars in cans rather than in the field, I could have expected to lose a quarter to half of them. I think the moderating temperature of the field soil keeps them from being 'cooked' while they are rooting out. Warm soil is fine, but our temps are often in the high 90's F in late spring, so the soi in cans gets to this temp even in the shade. In the sun, it gets higher than the ambient temp, often over 100F.

I agree with all that's said about loose porous soil. Cedars will get root rot in the blink of an eye in pots with bad soil, and water must drain right through your mix. In the proper soil, cedars will completely root colonize the pots as if the root ball is a solid chunk of wood. In the wrong mix, the soil will collapse into muck and your tree will be in great danger.

I agree about Jim's cedars, they are to die for. I could kick myself now for not buying one after he first dug some about six or seven years ago. I didn't have the money and now they are three times as much, but still worth every penny. By the way, I believe Jim's blue Atlas cascade won the 'best of show' or whatever it's called at last year's US bonsai convention in NY.

The most expeienced production nursery grower of all Conifers in Australia still has problems with field grown Atlantic cedars when digging up. Always loses a percentage.They tried root control bags in the ground and they were a disaster. The roots just didn't grow properly.

I have never tried potting a bonsai cedar after growth in Spring; always late winter/early spring before bud swell and never lost one.

Atlantic Cedars are an old favorite in Australia as there was a lot of old stock around in the late 1950s through to the late 1970s.

Si Nguyen said:
WOW! That's a masterpiece Grant! That's one of the most original bonsai I have ever seen. It must have been trained like that since its beginning and not some lucky yamadori find. The curves on this tree are very well done, original lines, and very pleasing. I don't see a bad a curve in it at all. The foliage is such healthy and blue too! Very beautiful!
Thanks for showing it.
Si

PS. The pot is slightly too big for this thin trunk. A smaller pot would make this tree look grander and older.
Click to expand...

I agree about pot and there is already another being considered.

The tree was trained for about 20 years and then fell into disrepair for another 10 years. The new owner moved to a hot and humid sea side city and the tree did not bud for one year(except a small amount of growth on one or two branches) and in my opinion would have died if not sent back to the cool climate where it grew up. This did happen.

One major branch did die but the tree has recovered in my care. I had to then restyle the tree with the remaining branches and what you see is the tree partway through training. It will be another 2 or 3 years and a repot before it is truly back to top form.

Brent said:
In the proper soil, cedars will completely root colonize the pots as if the root ball is a solid chunk of wood. In the wrong mix, the soil will collapse into muck and your tree will be in great danger.
Click to expand...

Boy wow, you are not kidding! I have never seen a firmer root bound plant than the deodor I repotted out of desperation yesterday. Water basicly stopped flowing thru this pot, which had been a landscape tree in this large pot on my deck for 3 years. 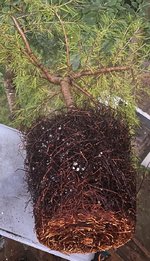 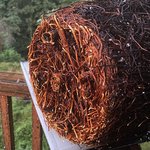 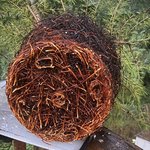 I'm also in Australia, in Melbourne. I would wait until spring to root prune.

I've done severe root prunes with Atlantic Cedars removing 70% of the roots and reducing 50% or more of the foliage all in the same day and they've powered along like nothing happened. But I've never done it in Autumn. You can root prune in the middle of Summer as well.
You must log in or register to reply here.

Heat is finally here in the Middle Atlantic
2

Propagation of Atlantic Cedar from cuttings?