Timeline for multiple trunk chops and an air layer

Ok, here goes me trying to wrap my head around too many parts.

Background: in the ground at my new house, I have a (very) old Euonymus that looks like it had been trunk chopped a decade ago (perhaps more), and amother time longer before that. Not pretty cuts, I doubt they were made with bonsai intentions, but they're low to the ground, leaving a lot of dead wood, and it lands me with an impressive trunk (over a foot in diameter) and sumo-style taper. There are four 3" branches coming off within the first foot of trunk, one of which is near-vertical. I plan to take off all of those lower branches completely except the near-vertical one (which will get chopped to only a few inches and become the new leader). The tricky thing is that there's a 6" trunk continuation, which comes off of the stump at a 45-degree angle (from what will be the back -- lucky!). This trunk has about a 2' straight shot, and then has three lovely curving branches that split off near to eachother (but not at the exact same level), each of which stretches without branches for at least three feet before branching out into large foliar masses. These upper branches are each about 3" thick.

Goal: end up with sumo-style jabba-the-hut bonsai, a 6" triple-trunk bonsai, and up to 7 3" plants for the yard. Those last 7 are less of a priority, but let's face it, they could end up as future bonsai, so... Maybe worth trying.

Problem: I have no idea what order to do things in. The suno hunk is obviously the biggest priority, but I don't mind taking time with it.

Clearly item #4 is the last task, and clearly #2 has to happen before #3. But aside from that I'm lost.

For example, I can see the utility in doing all seven air layers this coming Spring (there is lots of foliage on each -- they're all 6' or longer with lots of branches), which presumably would force a TON of backbudding (and hopefully not kill the tree). Then I figure I'd wait til Spring of 2023 or 2024 to do air-layer the triple-trunk. Problem being that I'd be taking literally all the leaves off of a single-flush species, and I don't want to take away too much energy and have just a stump in my yard til 2023 Spring. Or worse kill the whole tree. Or might it actually bud out again this summer?

Another option would be to air layer the bottom branches this spring, and the top branches the following year. This would likely be less stress, but might not end up in as much backbudding, especially far down the trunk.

Third option I see would be to air layer the upper branches this spring, then the triple trunk the next Spring (if it develops some good shoots this coming summer, else wait another year). Then air layer the bottom branches the year after the triple-trunk is removed. This seems to me to have the best protection for the sumo (which is the highest priority), as it will always have some 3" branches with foliage feeding it while I mess with the top. It also gives me air layer experience with this species, which I have never air layered before.

Fourth option: perhaps it is better to just not worry about trying to air-layer branches at all, cut them late this winter, and force the backbuds on the trunk in the first flush this spring. This might also be safe, would mean that I have new shoots covering the chops until I'm ready to air-layer. It also might be the quickest timeline to a sumo in a pot. But if it is possible to have those additional plants, I'm happy to take my time.

Thoughts? Thanks for any advice!

Photos would help. Your plan is ambitious.

Your 1,2,3,4 plan seems in order in the hypothetical. But without photos, who knows.

Ngidm said:
But if it is possible to have those additional plants, I'm happy to take my time.

Come up with...well, after them pics, come up with many more reasons to take your time!

You're better styling the entire tree where it is for years.

Not convinced this is true tbh.


Ngidm said:
over a foot in diameter
Click to expand...

That is massive! Do not think I have ever seen one that size


Ngidm said:
There are four 3" branches coming off within the first foot of trunk, one of which is near-vertical. I plan to take off all of those lower branches completely
Click to expand...

Keep in mind that big cuts will probably never close. It mighjt be best to tran and include most larger branches in the design.
N

Thanks for the input! I'll post some.pics when I'm back home on Thursday.

Re: taking off top branches before trunk, I think that if I were to air-layer that bohemoth, it wod be a bit unweildy. There are 6+ foot branches, in different directions, so we'd be talking about a 12' spread. I get the concept that more foliage means more food for the roots, but I'm not sure I could move it properly!

Interesting idea about using the big branches in the final design. I'll point them out in the pictures I post. Will be interesting to see your input after pics. The two previous big chops have not healed, so I will definitely have to learn carving on it.

I'm on board, source, with styling the sumo in the ground for quite a while -- just trying to get the other chunks off safely.

Thanks for all the responses!

Ok, sorry for the delay. Here are some pics. I included a 12V drill for scale (happened to be what was at hand as I walked out the door).

Also, I mis-remembered: the upper set of branches actually has five -- four big (3") upwards-facing branches and one out to the side. I plan to cut off the one to the side, but the four have nice movement.

The more I think about it, the less I think the air-layering of all those lower and upper branches is worth it. With any of the plans that include those, I'd be taking a lot of energy away from the single-flush tree, and then next year potentially doing the same. So, I'm leaning twords cutting all the lower branches (save for the tiny twig on the right that will make a perfect branch on the outside of that curve) and chopping all those large upper branches back to a few inches. I figure doing it late winter (Feb in West Central Illinois), before buds start to move, is the way to go. That would allow the plant to put all it's energy into backbudding and branches/growth that will will actually use. Then in late Spring/summer if 2023, I can try my hand at air-layering the upper, 6" diameter trunk off of the bottom.

Then I'll style the big one in the ground for several years before I pot it up, maybe when I retire in 15 years...

Or perhaps the wise ones among the community have other ideas on design.

Thanks for any thoughts.

Wow, that is one big ugly Euonymus. I like it. But in all honesty, I like it in the ground where it is. Think "Niwaki". Niwaki are trees growing in the ground that are trained to look old. I would take out a few of the ram rod straight branches that are all clustered together. Then see how it looks. Then take out one or two more. You could end up with an interesting "sentinel tree". But I don't see any part of it becoming bonsai.

There are much better species to use for bonsai than Euonymus. A species that flushes continuously all summer is MUCH easier to work with as a person new to the hobby. Elms for example.
N

Thanks for the replies, Leo and others. Unfortunately for the tree, it's gotta get out of there eventually (my wife wants a new driveway in the next 5ish years), and I fear it will be too big to move in one piece.

Therefore, I did a little bit of virtual toying today after a few more pictures. I think what I'm struggling with is that I think I'm missing something in what tree development looks like. Several of you very knowledgeable folks have mentioned that it doesn't look like it is good bonsai material, but it seems to me as if it could developed it in the manner of these photos. It would be large, but I'm fine with that. The photos below are an actual picture, then a tracing of the trunk/branches that I would keep in black. Then some of just that trunk in black. The brown branches that follow would be new growth over several years of let-it-grow-for-a-few-seasons-then-chop-way-back for taper. Then a kind of foliage outline. I guess this would be sorta spreading oak style? The main branches that are there seem a little straight in this view, but they've got some good movement in and out of the page (and they're not in a single plane -- the middle one us much farther back).

So, what am I not getting? Is it something in the pattern of growth of this specific species (which I know is single-flush, etc.), or something in the aesthetic? Or is it just that these new branches will take way too much time to develop sufficient caliper for a smooth transition?

Thanks for any thoughts. I appreciate you! 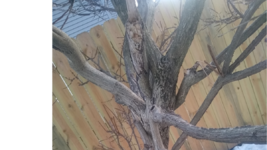