i mentioned i got seeds from this tree not long ago. theyre in my fridge (...im just throwing all of these and others into soil after a few days of h20 in december or january, LED light whatever sprouts)

nice to see my state tax money working until 6pm ish (i guess??) 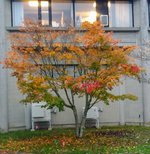 the ginkgo is really nice, and two bald cypress behind it as well. 30' ginkgo maybe 75' BC.
i like how the dropped foliage looks like the tree is illuminating the ground under it (i was as blazed as that sounds). the buildings have a lot of glass panels and really nice houseplant tropicals all throughout, and tons of nice trees on this campus, 2 mins from my house. The Life Story of The Oldest Tree on Earth

Revered for its beauty and its longevity, the ginkgo is a living fossil, unchanged for more than 200 million years. Botanist Peter Crane, who has a written what he calls a biography of this unique tree, talks to Yale Environment 360 about the inspiring history and cultural significance of the... 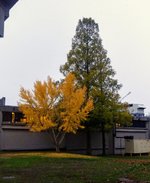 not sure what this is, but i dig the profile 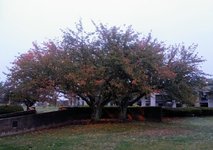 i tihnk youre right

That maple and ginkgo

I start quite a few trees from seed. University campuses are often good collecting sites. The semi-public nature of the campus setting, means generally nobody gets "excited" if you grab a few seeds. I would definitely look for seed from the ginkgo and bald cypress. That maple is nice, but I would first try to identify which species of maple it is. Not all maple species are worth the effort as bonsai. Acer palmatum is the best maple, with A, ginnala and trident maple being close runners up. The rest of the maples are "iffy" at best.

With raising future bonsai from seed, the first 5 to 10 years there is not much "bonsai technique" going on, you should identify the species of maple before putting that effort into the seedlings.

That said, I have a few ginkgo from seed collected from the female tree on the grounds of the Frank Lloyd Wright Studio in Oak Park IL. Also some seedlings from a ginkgo female in Milwaukee. I have taken a portion of the seeds I've harvested, cleaned them, boiled them and eaten them. They are delicious. Once cleaned, there is no "off flavor", they taste very much like a mild almond or a chestnut. Slivered, and simmered in a vegetable or chicken broth, ginkgo seed make a marvelous addition to any soup.

Bald cypress is just as interesting a species as ginkgo. It is a member of the "redwood" group of conifers, as such its closest relatives are the coast redwood and the dawn redwood. In fact it is easy to confuse a dawn redwood with a bald cypress. They sprout easily from seed harvested in autumn. Seedlings grow pretty rapidly. In 5 years you can easily have trunks 2 to 3 inches in diameter.

thanks - great info Leo
You must log in or register to reply here.