So after my first attempt at Bonsai (previous thread) was a little gung go (although the trees are still alive, even flowering), I have taken a more considered approach.

This was my first attempt at wiring and I also used cut paste on the larger branches I removed.

The before and after pictures are below.

Looking on the left side at the lowest point I have left a branch which has not been wired. I did this as a sacrificial branch to help thicken up the truck. However, would the first'proper' branch have also helped thicken the trunk in absense of a sacrificial branch?

In order to keep the 'insults' to the tree to a minimum I have left it in its original pot. 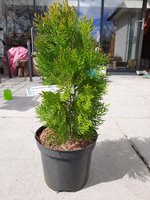 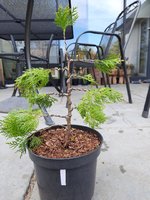 You gotta excersize your future vision some.
A lot of this is looking at other trees you find impressive and doing something to yours to move it towards that.

I'd ask if you think you've accomplished this, but that seems insulting, since it's pretty clear you're diving in head first with your eyes closed!

Your second branch pair up is wired well.

You'll end up reading about how "traditional" formal uprights are one of the hardest to accomplish.

I'd like to see you wire the trunk and put some movement in them wired branches!

Not an awful start.

Many of us have the same beginning story: jump in both feet on the deep end, full of excitement and impatient.
Either we get lucky or come back later with a better appreciation for the bonsai mindset.
You must log in or register to reply here.