Just wanted to share these pics with you maple lovers. I acquired two of these dwarfs last year and planted them in my grow out area. Some day, I hope to make bonsai out of them. For now I am just enjoying their beauty in the ground. They have exquisite tiny leaves outlined in hot pink/rust red.

Not sure why this beauty is not seen more often in bonsai... although she looks to be a very slow grower and that might be why 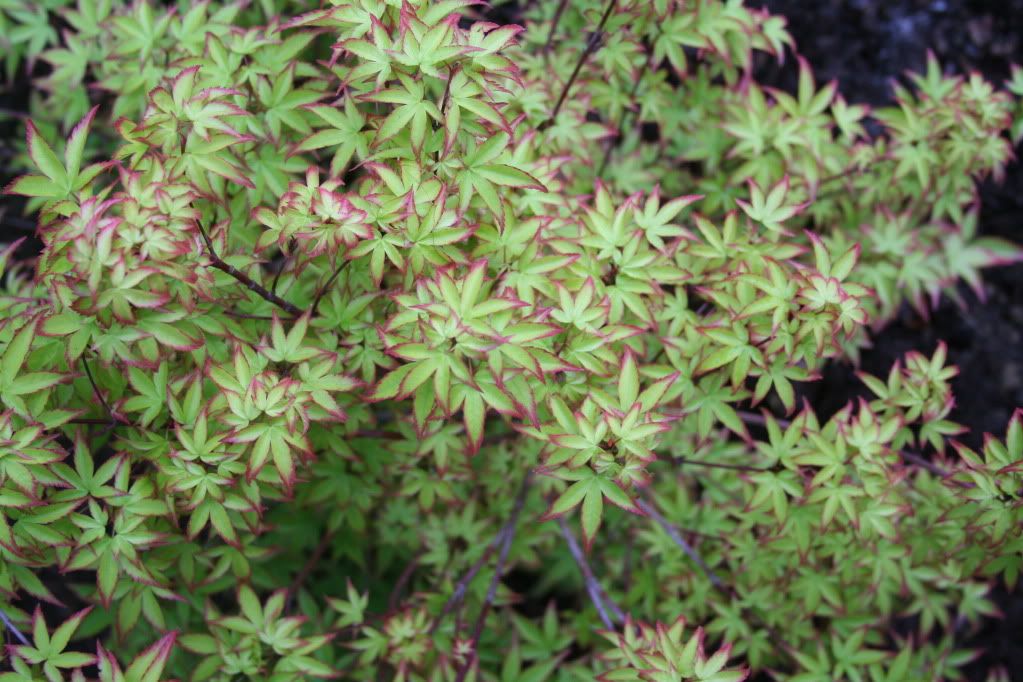 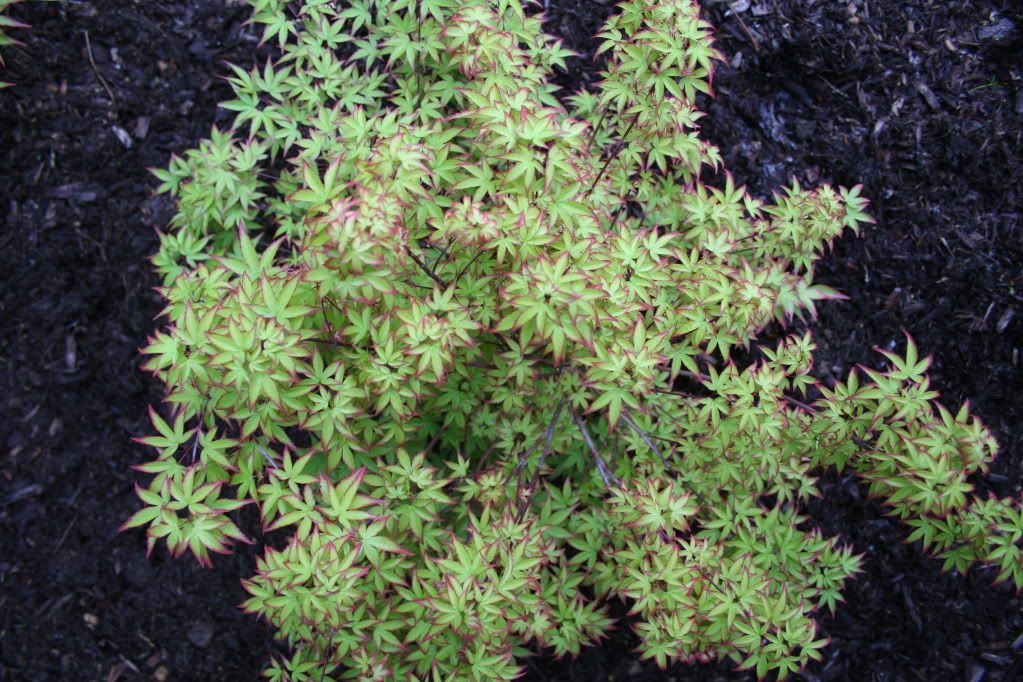 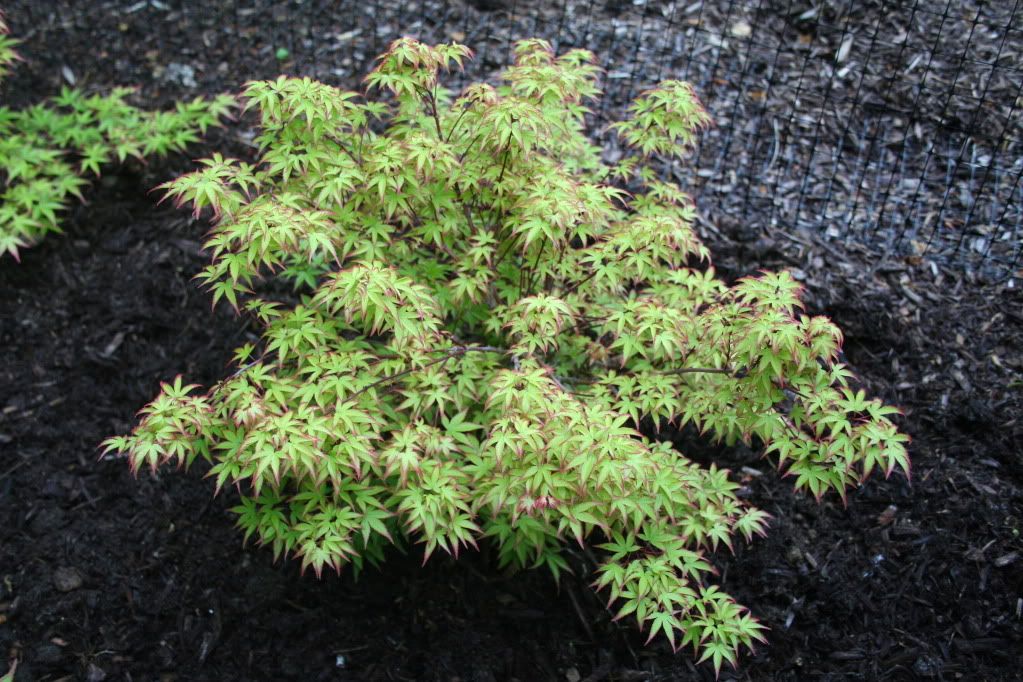 That is one of the more lovely Japanese Maple cultivars I have seen.

Macho, your initial thought is pretty much right on. The dwarf varieties are nice but take a very long time to develop. It's often easier and less time consuming to develop the species and use technique for inter-node and leaf size reduction. But, if certain characteristics that appeal to you are only available with the cultivar then time is the requisite parameter.
Wood

Gary, yes I agree. The reason I had wondered about it's lack of popularity in bonsai circles is the fact that we do see quite often other dwarf types in use such as Kashima, Kotohime and Kiyohime. In fact I wonder now why only these dwarfs seem to be in the spotlight and not others?

Kiyohime is not an easy plant to make a bonsai out of. It is not apically dominant. It loses its crown branching easily. Pruning them is not easy because of their sideways growth pattern...

Dwarf species, as a rule, are problematic for bonsai. They simply don't develop very quickly or respond like "regular" non-dwarf plants to bonsai treatment. No doubt someone will now post spectacular examples of said dwarf species . 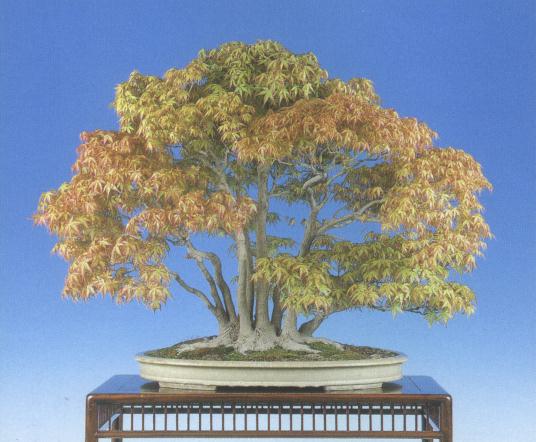 WOW Axxonn gorgeous example!! Is that a Kashima? How long have you had this beauty?

Ahh, sorry Mach5, I should have mentioned that I Googled that. lol -- That's not mine. I found it at:

Not to rain on the parade , but how do you know this is a dwarf variety? It isn't labeled on the site as far as I can tell. And no, small leaves are not a defining trait. Regular cultivars of Japanese maple can develop extremely small leaves if they are root bound or have undergone other advanced techniques.

And given the scale of the tree in the picture, the leaves on this specimen are not all that small...and they are not fully extended.

LOL you had me there for a second

Rockm: The name Yatsubusa is a general term meaning "dwarf" in Japanese. I can tell you that these leaves are quite small and yes most are fully extended in the pic I provided. This all considering that this plant has not gone through typical bonsai horticultural techniques in which case I imagine the leaves will become even smaller.

Also it has a pretty tight internodal structure and overall hight is quite small as well even when left in the ground. Regardless I just thought I would share pics since it is so pretty indeed!
G

Most of the dwarf cultivars that are popular are popular because Bill V. introduced them and promoted them in his magazine International Bonsai.

The name Yatsubusa is a general term meaning "dwarf" in Japanese. I can tell you that these leaves are quite small and yes most are fully extended in the pic I provided.

I know the term yatsubusa, it doesn't really mean "dwarf" exactly. There isn't really a direct translation -- if I remember correctly -- it can also have to do with tight internodal growth and the ability to backbud densely. "Dwarf" may, or many not, be part of the meaning...from what I understand. Literally, I think it means eight lobed...Anyway, the pic is not labeled as such.

FWIW, I have an unnamed "normal" Japanese maple group that have extremely small leaves. I have another made of cuttings of the same parent tree that has "normal" sized leaves. The only difference is the one with the larger leaves was recently repotted. The one with the tiny leaves (smaller than the ones in this pic) is extremely rootbound...Just sayin, dwarf isn't really necessary, nor even desireable given their slower performance.

When i hear dwarf or yatsubusa.....

To me the defining characteristic of "dwarf" is shorter internodes. They tend to also have smaller foliage, but not always. One dwarf cultivar that comes to mind, aoba Jo, is dwarf but has larger than normal leaves....

They also tend to be slower growing, but many are vigorous. Mikawa yatsubusa comes to mind.

The reason more cultivated forms aren't used more i think in bonsai owes to the fact that people don't like graft unions in bonsai. And most palmatum cultivars are grafted because it makes a bigger sellable plant faster, not because they can't be rooted. Any decent nurseryman can root japanese maples. It isn't hard at all. It's just that for everyone other than bonsai enthusiasts grafted plants are better.

They are gorgeous! I've had one in a pot for over 5 years and its only about 16" tall. The care sheet I got with it said it is actually considered a shrub (?) and will only reach 1 1/2 feet tall.

The trunk size is what hampers it as a bonsai species, I think. 7 year old tree with a 1" trunk is not very impressive. Beautiful tree none the less.

Ha! My very first thread on BNut is back!

I have two growing in open ground. Both were grafted. I took one out of the ground last spring to air layer and put it in a training pot to be able to observe it and have more control of moisture etc. Two weeks ago I peeked and got absolutely nothing which highly surprised me. I've done many a layers on Japanese maples and hardly EVER do I get well... nothing! It just refused to comply with any plans I had. I will try again next year and see.


The other tree is still in the ground growing very happily albeit horizontally and not vertically. The round and flat canopy is about 2' in diameter with almost a 1" trunk. It almost has a prostrate growth habit.


Although beautiful, these trees are not very vigorous and are slow. This is why I generally prefer to work with more of the well stablished Japanese maples since they respond much more readily to bonsai techniques making the process of creating a deciduous tree in miniature more satisfying.
Last edited: Aug 5, 2014

nice looking tree Sergio.
Take some pics of it in its training pot!
R

many updates on those 2 maples in the ground? I assume they were dug out out already?
You must log in or register to reply here.