When I started Bonsai, one of the plant's that I wanted right from the get-go was a privet. A nice, big, old privet that I could carve and abuse and it would still keep growing. Like many I was inspired By Harry Harrington's website and Graham Potter's vids showing what you could actually do to these resilient little hedge plants, and being a beginner I thought these would be the perfect plants for me to start on... Problem was, there were no mature privet hedges around that I could collect from in my area, and the only ones I could find were planted within the last 15 years and had trunks no bigger than an inch across... So I gave up on privets and bought or collected other species to use for bonsai material. But good things come to those who wait, and luckily I only had to wait a year...

Early Spring 2014: I was working on cleaning up a treeline along a stone wall at a farm where I used to work.
I was clearing back some brush when I happened to spy something through an opening in the trees: 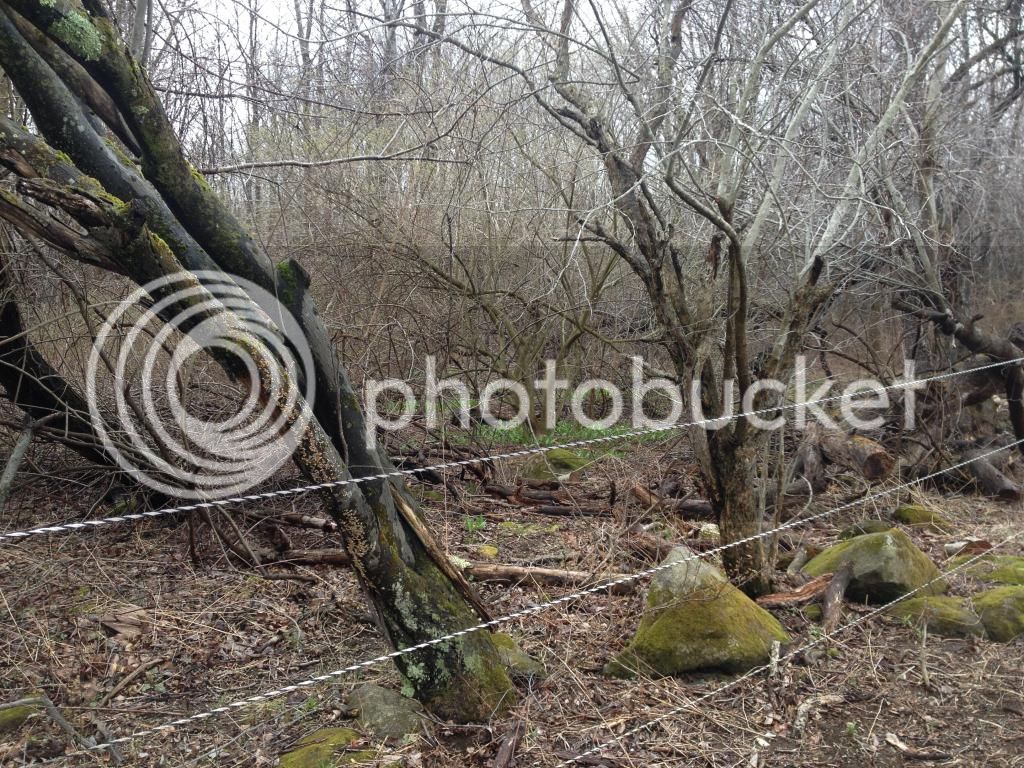 It was a shrub/small tree that I had probably looked at a million times but had never "seen" until then. What struck my was how green it seemed against the drab background of the still sleeping woods, like it was telling me to look at it. Hazarding a "talking to" by my boss, I jumped the fence to get a closer look: 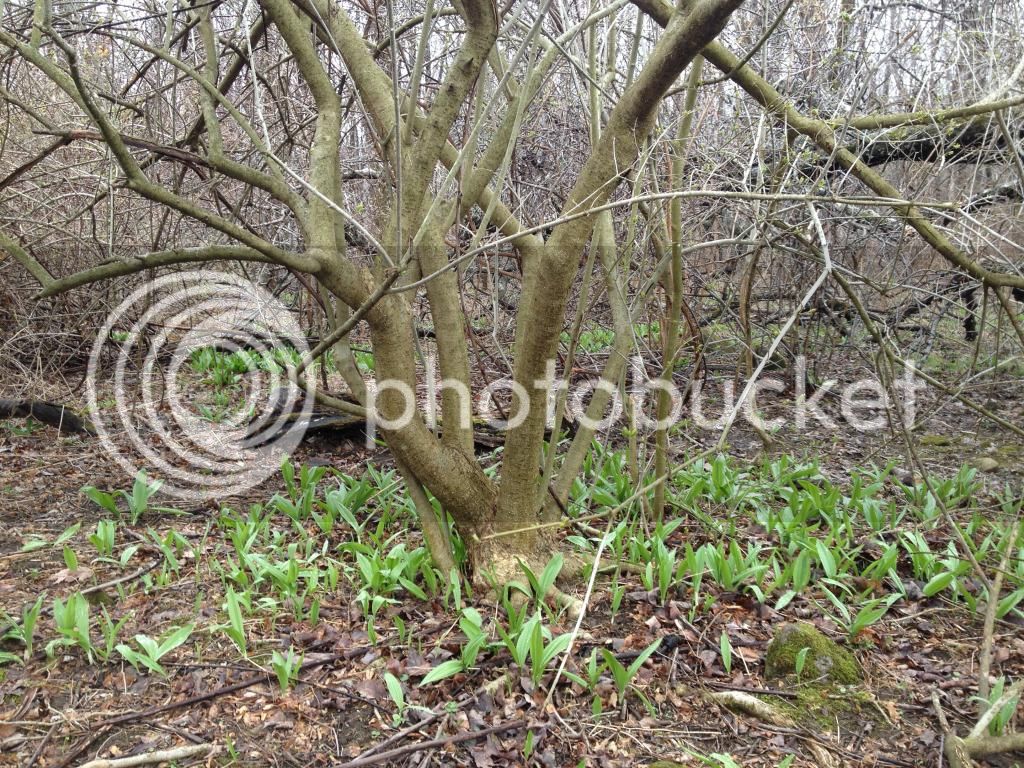 I couldn't believe it! I literally did a double-take when I looked at the twigging and found that unmistakable herringbone pattern of growth and small dark drupes left over from last season. I had found my giant privet! Getting permission to dig it was easy-peasy too... My boss wanted all invasive plants gone off her property, so I made a deal to not cut it down right away, and to let me come back on my day off later that week and dig it up roots and all and cart it away!

Fast Forward to that weekend:

I arrived with all my collecting kit in the morning and wasted no time getting to business. I had studied the many photos I had taken days before to choose a main trunk line, so after all the unnecessary branching was removed, I was left with this: 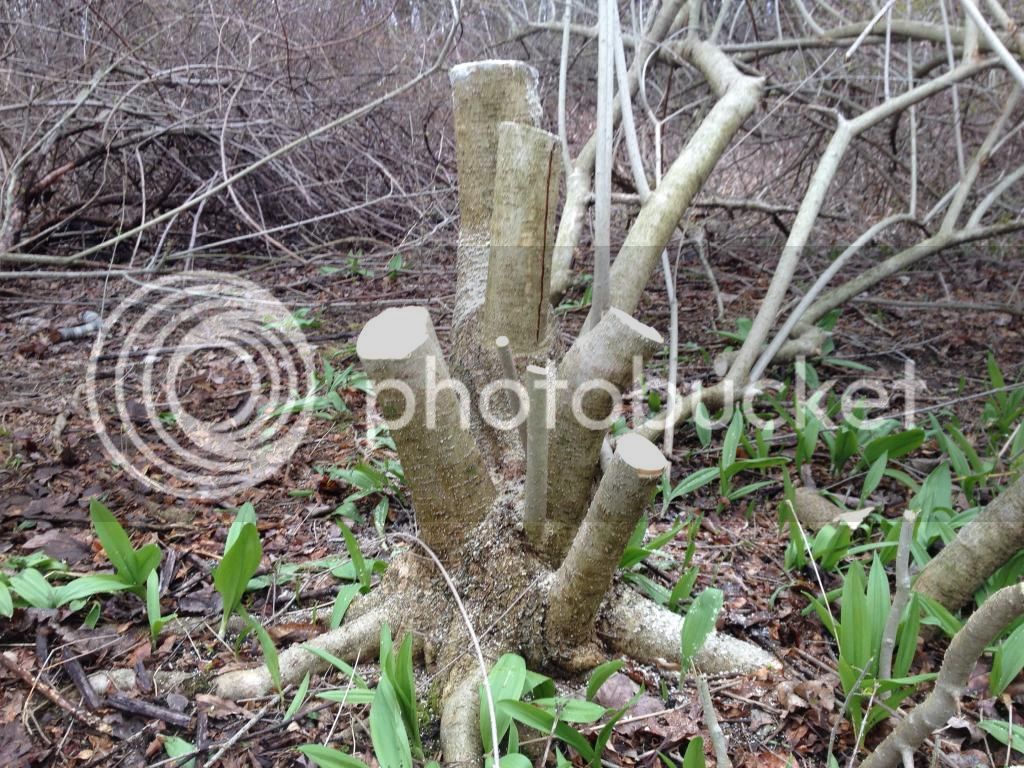 With the easy part done, now came the chore of digging up the beast, and any surprises that lay beneath... 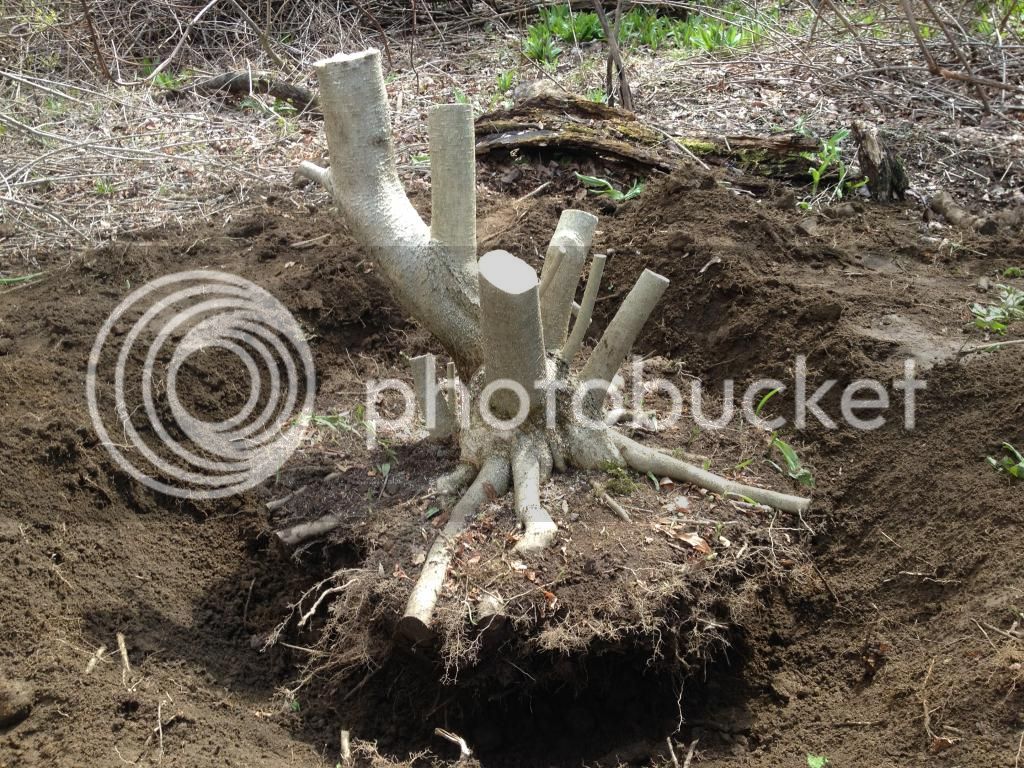 For the most part, I lucked out with some fairly easy digging - no major tree roots or rocks to contend with and soft, humus rich soil. The few rocks that I did run into were directly under the privet, which were what probably caused the roots to travel more horizontally over the years giving this plant such a pronounced flare above the soil line. So after two hours of careful digging, probing, and major root cutting, it was time to lever the beast out of it's hole. 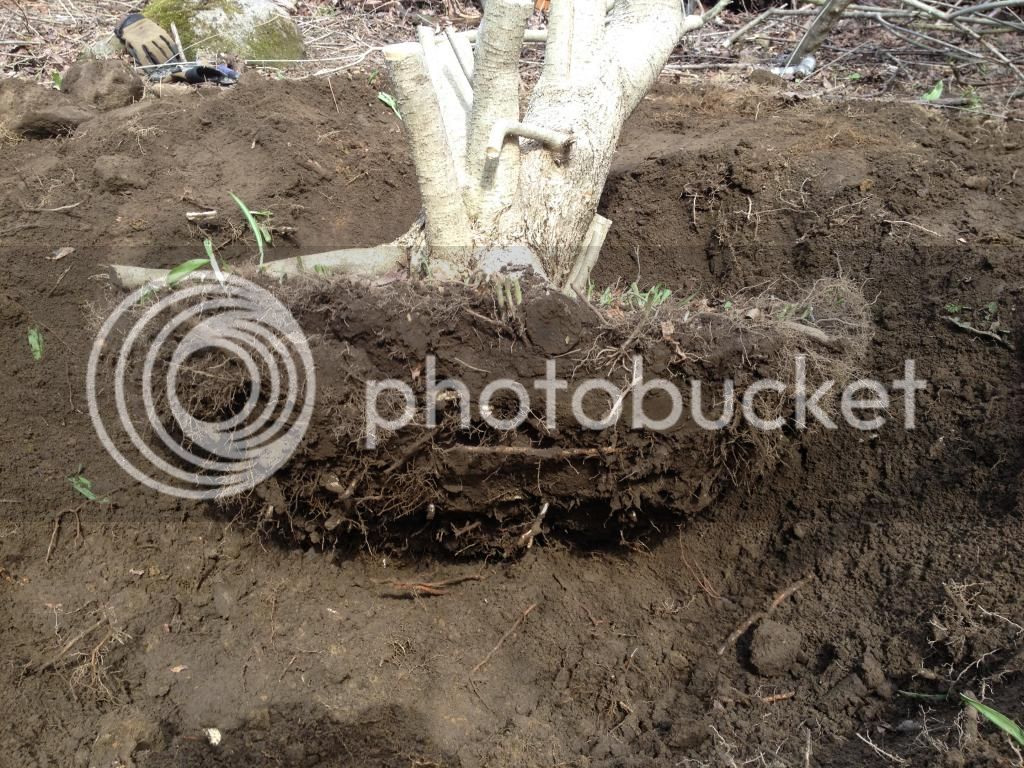 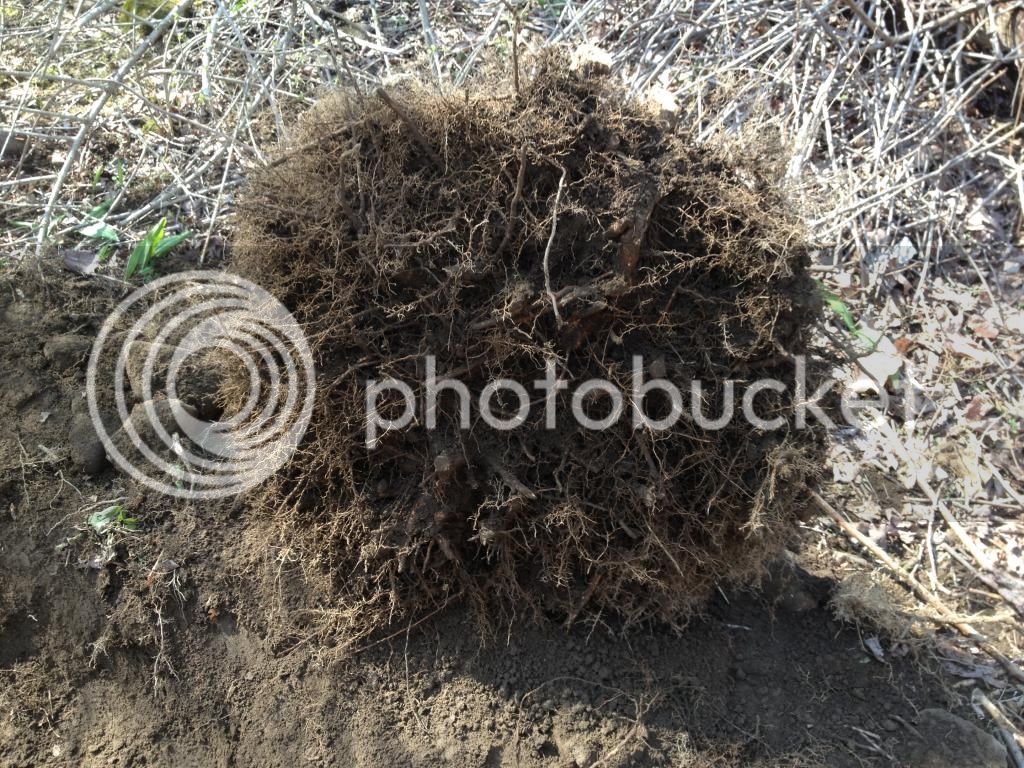 Notice the lack of major tap roots and plenty of fine roots still near the trunk, jackpot!

After another two hours of wrestling this thing out of the woods and up the 300 yards of hillside pasture back to my car, I was finally on my way home with the massive plant I had always wanted... But now I had to pot it!

As luck would have it, there were frequent showers all afternoon and into the evening that day, so I just left the tree outside in a trash bag in the rain to stay wet while I built the box to house it. Final dimensions: 40x40x8" 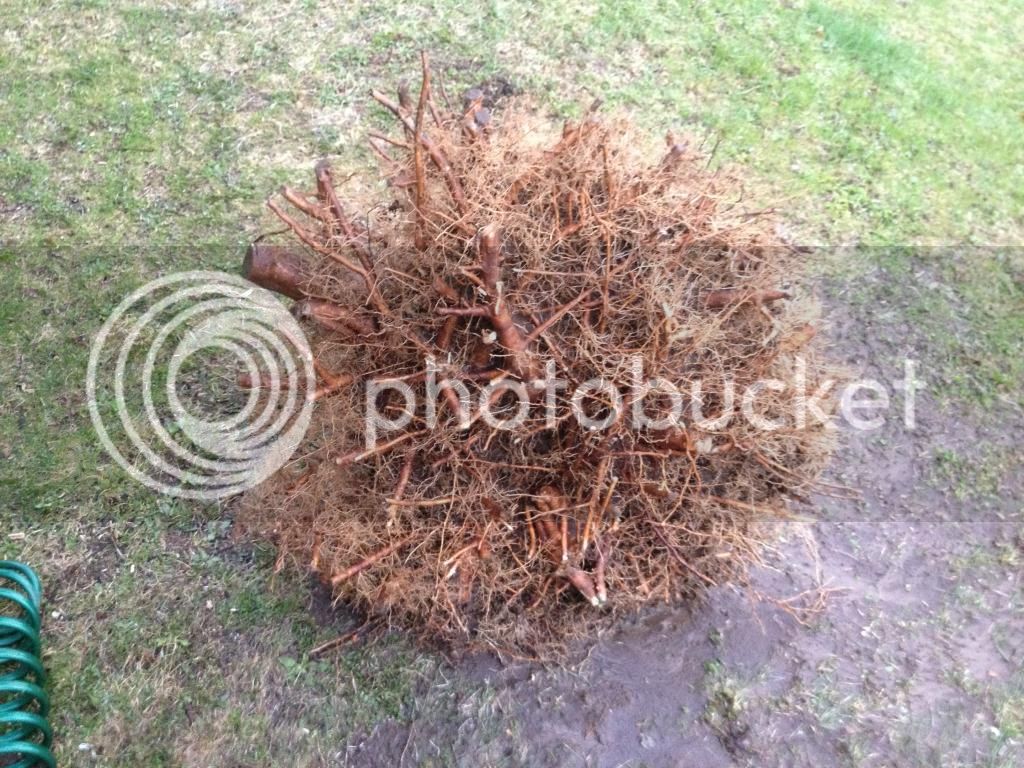 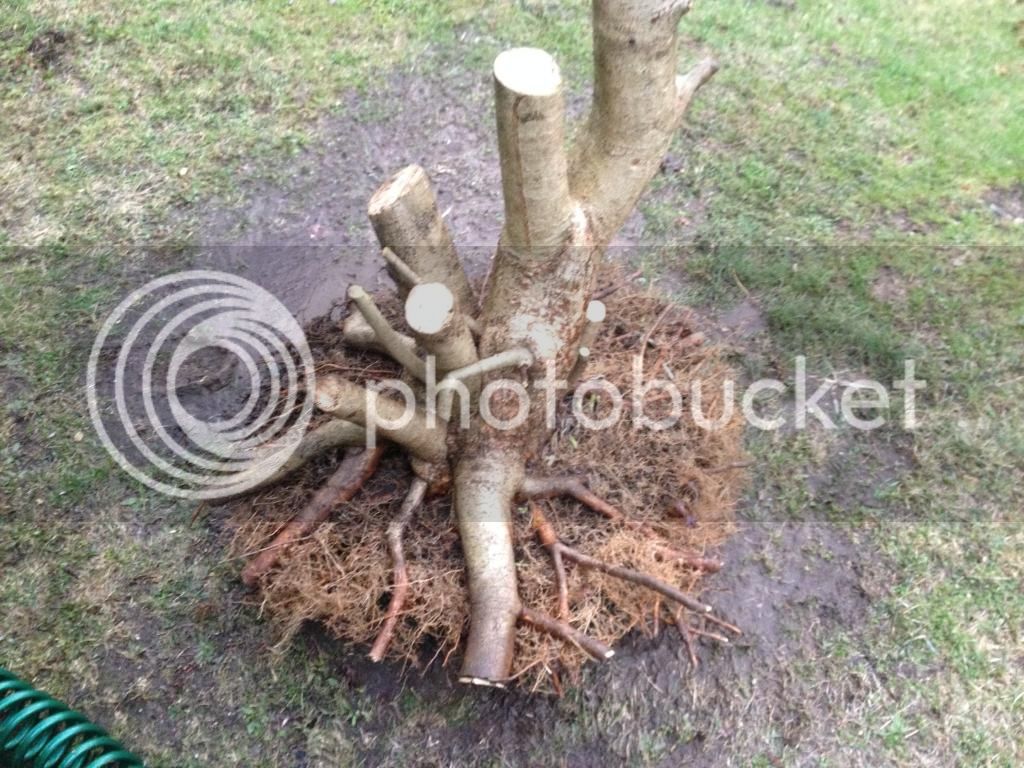 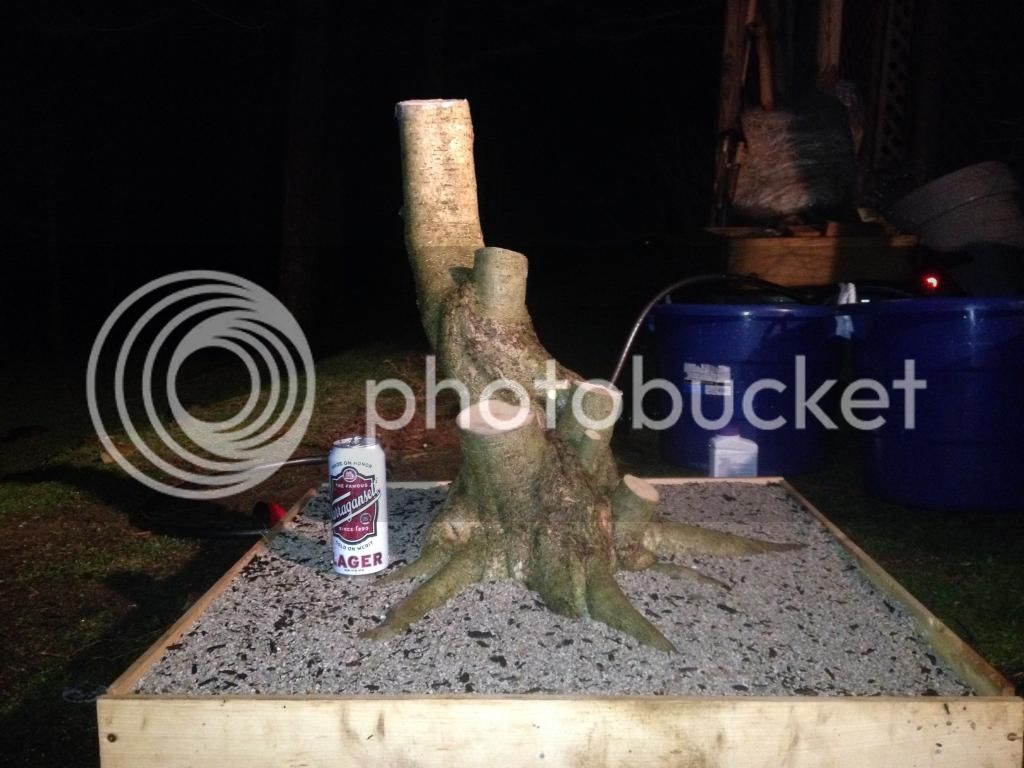 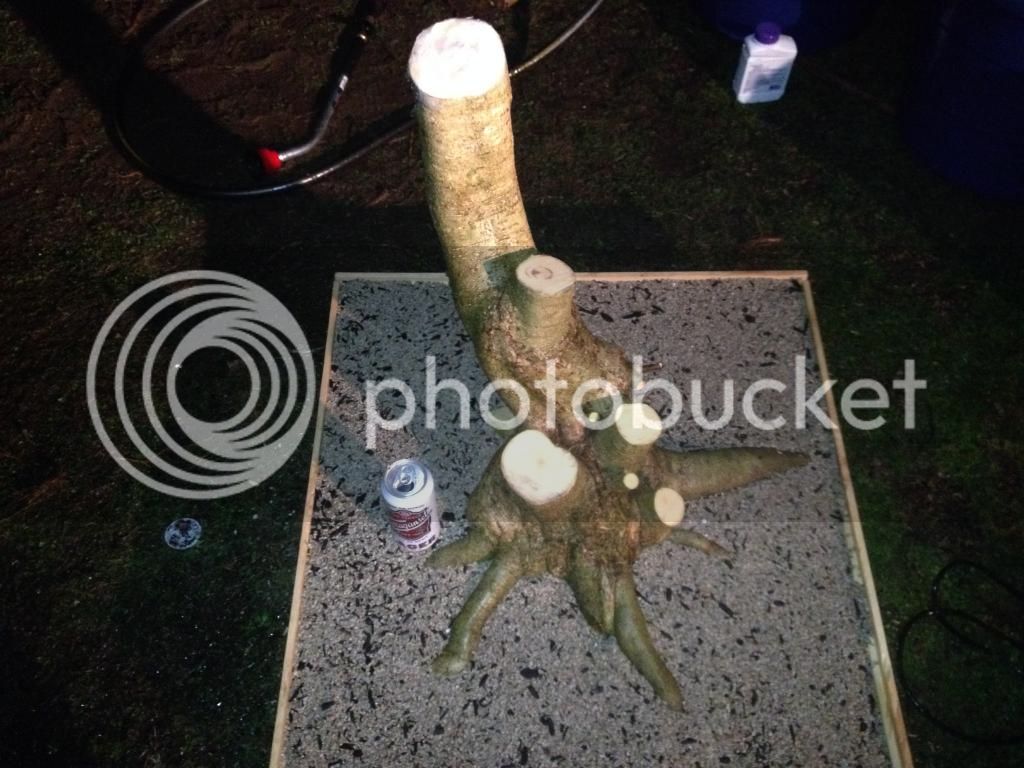 I then tented the whole box and plant with clear plastic to create a mini-greenhouse to help with the plant's recovery. My thought was even though it's privet it just went through a hell of an ordeal, and I didn't want to let an entire day of work go to waste. It seems that my fears were unfounded because, in true privet fashion, I was greeted to a plethora of new green buds about a month later. 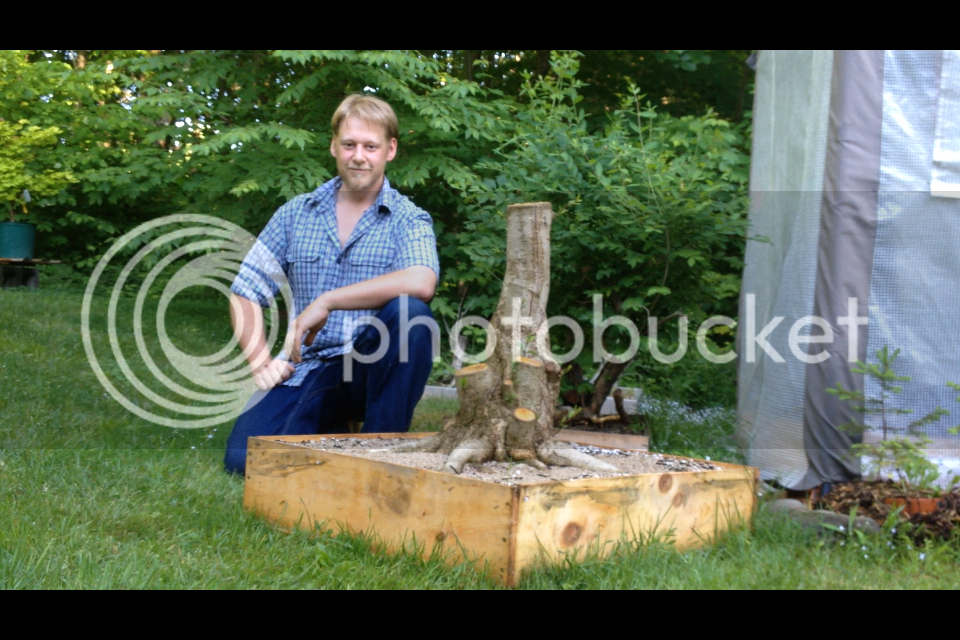 With careful watering and fertilizing the tree absolutely exploded! And by July, a lot of the trunk was covered up by a plume of bright green growth. I couldn't believe how strongly it grew! Some of the branches approached 3/8" thickness by the end of the season. I am truly glad that this plant made it. 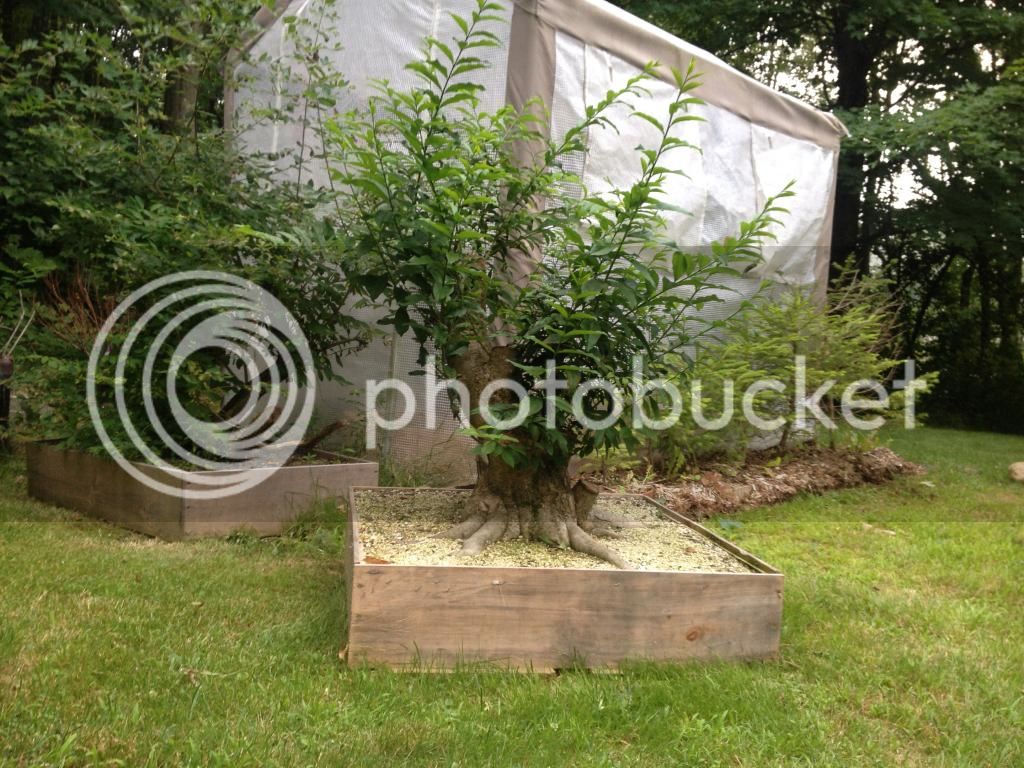 Right now it's leaf-bare and under more than a foot of snow, but spring will come. And until then my job is to figure out how to begin turning my massive privet into a massive bonsai

Nice find. And well documented story so far. Hope you have someone to help you carry this beast around since it looks like you are not able to move it alone. Carving job will be challenge. Fingers crossed. Thanks for posting. ;-)

Nothing like collecting your own trees is there? Good work!

Maros said:
Hope you have someone to help you carry this beast around since it looks like you are not able to move it alone.
Click to expand...

Lol, I follow Walter Pall's philosophy of "I only work on bonsai I can move myself." So everything from digging to potting to placing in my yard was only done with my own two hands. Granted, once it was potted up it took a hand truck and a couple of packing straps to wheel it around, but it was still only me Hefting this beast into my Jeep before I rinsed all the field soil off the roots was a challenge, I cant believe I didn't blow out my back! 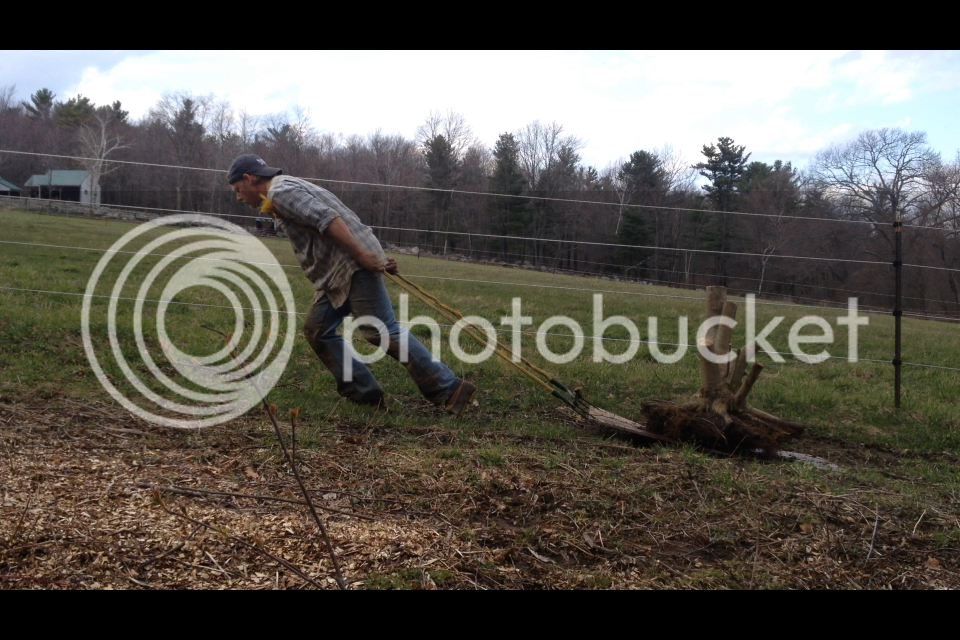 (Note - The camera I put on the rock wasn't tilted, that's the slope of the hill I had to drag it up!)

Thank you for the kind comments though, I look forward to the carving challenge ahead of me.

Nice of you to take your trees for a walk now and then.....

BrianBay9 said:
Nice of you to take your trees for a walk now and then.....
Click to expand...

Don't mind taking them for a walk now and then. Now... if they start taking me for a walk...

brewmeister83 said:
(Note - The camera I put on the rock wasn't tilted, that's the slope of the hill I had to drag it up!)
Click to expand...

Bonsai Nut said:
You can tell because the fence post at the edge of the photo is vertical
Click to expand...

I was wondering when someone would pick up on that Also, the shed roof in the background is horizontal and parallel to the top of the photo - unfortunately stating the obvious has become a habit because of the business I work in... These days you can't expect teenagers to put 2 and 2 together...

great find! its gonne be fun working with this one i bet

Dude that's gonna be awesome once it starts to take shape. That's a beast of a tree!

brewmeister83 said:
Lol, I follow Walter Pall's philosophy of "I only work on bonsai I can move myself." So everything from digging to potting to placing in my yard was only done with my own two hands. Granted, once it was potted up it took a hand truck and a couple of packing straps to wheel it around, but it was still only me Hefting this beast into my Jeep before I rinsed all the field soil off the roots was a challenge, I cant believe I didn't blow out my back!
Click to expand...

Nice picture. If you did all this hard work on your own that hats off. I did similar jobs myself and I know what are you talking about.

I have been away for a few months and been catching up on posts. VERY good find with an excellent chance of growing! Has me grinning indeed

Wow! You must be under 40 to dig that up and haul it out of there on your own. I can't wait to follow the development of that one! I have a few small privets I dug up a few years ago, but they were only 10 years old and almost dead because they were planted under a black walnut tree, which is poisonous. They have bounced back nicely though. The first one will go into a real pot this year!

So here's a question... After looking at this one again the other day there's about an 8 inch stretch on the back and side of the trunk that didn't send out anything last year... Should I wait and see if it buds out this year, or is it possible to thread graft a privet? I've never heard of someone grafting one because they usually send buds out all over...

Great find!!! I would wait to see if it buds, can always graft later, did you remember to turn the box every week? this might help allow it a good growing area. All in all...it is just beautiful!

AMAZING….stories like this make me want to go tree hunting! I guess I can start looking for trees while I'm out Field Herping! (Looking for Snakes) I can't wait to see the updates as they progress!

pbethune said:
Great find!!! I would wait to see if it buds, can always graft later, did you remember to turn the box every week? this might help allow it a good growing area. All in all...it is just beautiful!
Click to expand...

I did turn it about every 2-3 weeks last summer, but as you can see from the pics below (taken yesterday) it has quite the lean causing a whole section to be shaded regardless of rotation towards the sun... 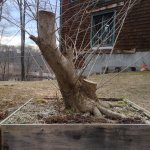 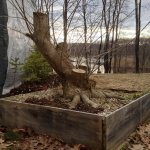 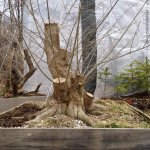 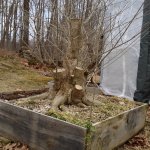 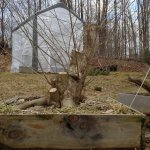 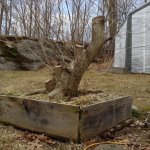 Looking at it again, I think my worries may be unfounded - with careful selection I may have the branching needed to pull off a decent design. I'm voting for view 3 (or maybe slightly left of it) for the future front. What does everyone else think?

As far as styling the tree, I'm thinking (very) informal broom... since it's in the olive family, takes well to carving and hollowing, and will eventually produce small dark purple drupes (fruits) in the fall, I'm thinking of styling it like those ancient looking, sinuous, hollow and broken olive trees you find in southern Europe and the Middle East... Something like this maybe...