I bought this male European yew at the BSOP 2017 fall show for $385. It had gone to auction through the Heritage Program after the passing of a man by the name of McDonald. That’s about all I know about the history of the tree, but I guess it may have been landscaping material at some point. It was hugely overgrown and I could tell the former owner had not found time to work on it in recent years. 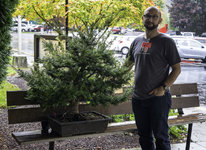 To even get the tree home I had to remove about 9" off the top of the main trunk, which I felt bad about for a bit. Now I look back at this and feel vindicated — a tree 48 inches wide and tall doesn’t make sense for this species and design when the trunk is about 5 inches diameter above the basal flare.


In late winter 2018 I did some deep cleaning of uncontrolled growths, crotch growths, and removed obviously unnecessary foliage. It was a ton of cleanup but hardly made a dent. I also decided what the likely front would be. This photo was from September; a lot of excessively large needles are visible — I hadn’t yet figured out the watering routine on this tree. 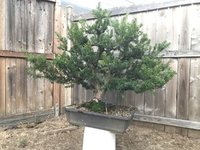 In January 2019 I repotted the tree, which went pretty smoothly. I removed some broken down soil and matted roots, plus took about two inches off the right side of the roots to fit it in this slightly smaller (but deeper) pot. I also corrected some major flaws in the surface roots, which had been hidden by the moss. 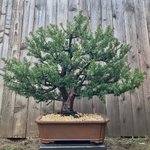 I recall doing a little pruning in 2019 but I don’t recall the details. I think it was just minor cleanup for tertiary branch selection and to remove more poorly positioned growths.


Then, this year I took on the process of finally styling the tree. Up to this point its primary branches were all pretty straight and level with only minor taper. 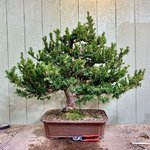 June 2020, where you can see the major reduction in the length of the first branch, the removal of the competing upper canopy on the right, and a massive thinning of foliage on the lower left branches 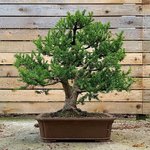 And, now, the tree halfway through its current (structural) styling efforts. 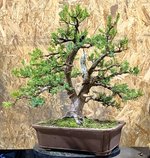 Nice work so far! Really turning into a nice tree!

I find that old yew branches are slow to set in place. You might have to resort to guy wires to keep the angle to the trunk for a few years.
I would not worry too much about wiring the rest of the branches too. If well-rooted, these are bullet-proof

Killer!
You must log in or register to reply here.