Here's my display with two backgrounds... I like them both for different reasons... The photos aren't perfect (I wish the table position was more dead-on, but I didn't realize it until I got home from the shoot)... but I am pleased with the overall feel of the display. Comments are always welcomed, but at this point, I can't really change anything... 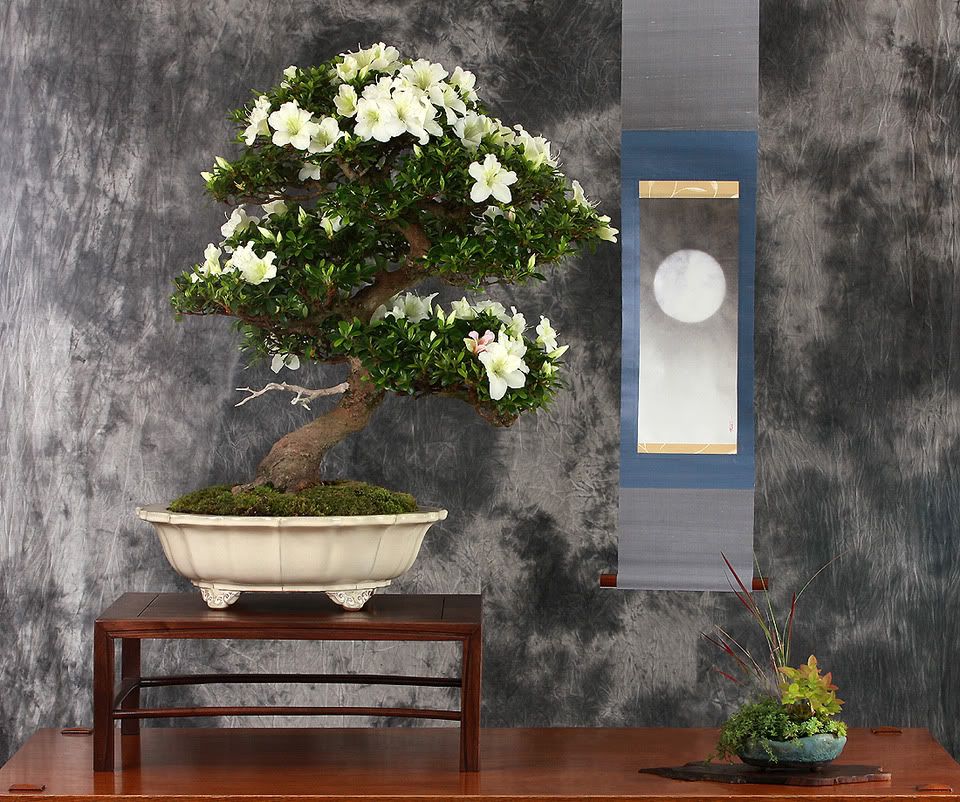 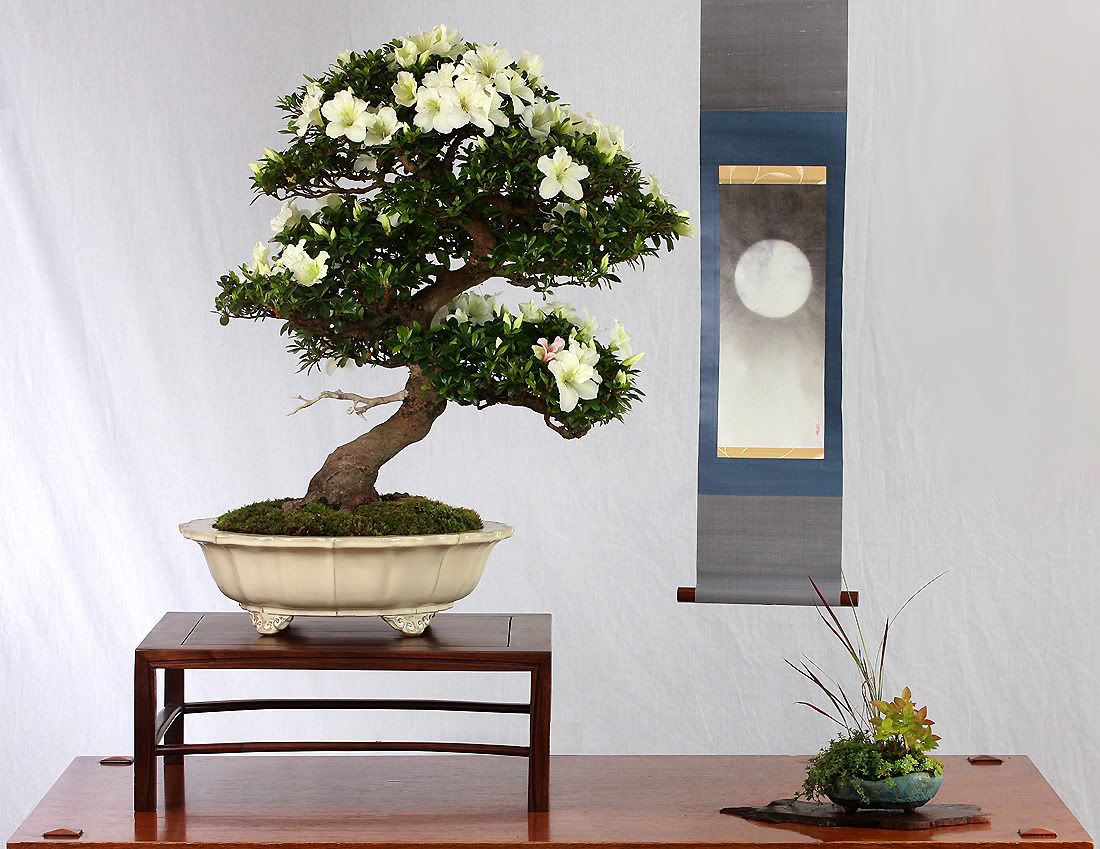 I love the kusamono... the tuft of leaves in there is a dwarf form of gaultheria which is rarely used because it doesn't transplant well... but I was fortunate, and its in the same plant family as azalea... which is why I wanted it as a feature in the kusamono.


The scroll is one of the ones that Paul Goff made for me...

Elegant display!
I look forward to seeing it in person in less than 2 weeks. I thought you said it bloomed early and would not have flowers? Did you graft flowering branch's at a secret Bonsai laboratory?
Seriously, it looks great and I hope to meet you in Rochester!

There is such a serene feeling to this display. The kusamono is a delightful arrangement. Thanks for sharing!

Incredible! Love the darker background, really emphasizes the repeated whites. Best of luck at the exhibition; it's a great entry.

Beautiful Vic, I gotta say I like the lighter background better. The scroll in the darker background version looks like it cuts the photo in half. Just misleading to the eye imo. Pretty, pretty overall tho. Good luck.

Veeerrryyy nice. I see many buds on the azalea. That is wonderful. I hope they are open at just the right timing. Are you driving the tree there? Will you be keeping the car pretty cool and wearing layers?

The kusamono is beautiful. The tips of red on the grass and the edges of the gaultheria leaves are so attractive. With all of the white in the primary element the red is a great little pop.

That's a well-photographed tree. What variety of Satsuki is this?

I prefer the dark background, but wish the back light wasn't reflected so sharply in the bottom piece of the scroll. It makes it almost look artificial.
I

Both are beautiful but to me the dark hides the trunk, so I prefer the white background.

The lighter color background looks more like a moonlit night and is more keeping with the scroll of the moon. A beautiful bonsai, beautiful display. Good Luck!

WOW!! I love both backgrounds, but I do agree in use of the lighter one to see the trunk and branches more. Maybe something in between? Wish I could see it in person. Beautiful display.

Bravo Ms Vic...well done. Of the 4 people that viewed both displays in our house it was split down the middle as far as preference....which is par All agreed that it was well done. I myself opted for the gray background as it looks like moon shadows on the wall and seems to tie the scroll in nicely. Though the tree seems dark against this background I feel that in person the lighting issue would negated.

The kusamono is outstanding...I am not big on kusamono because they rarely have much thought put into them...yours had thought and creativity.

Thanks for sharing this your display. Wish I could attend and see it in person.

Beautiful Vic. Everything works together well. Nice accent and beautiful scroll. Either background works for me. I'm partial to the darker one, but the plain one is a rock solid choice.

I have one quibble though (and it's not a big one)--the scroll is a bit low compared to the tree--I think the moon should be slightly higher--perhaps the bottom of the moon even with the top of the tree, or the middle of the moon at treetop level. I'd also move it a bit further away from the tree (although I don't know how much room you have in the exhibit)...

As it is now, both the tree and subject of the scroll (moon) are on basically the same viewing plane which isn't as visually compelling as an asymmetrical placement. A higher placement of the scroll would break up that straight line a bit.

All this may just be me though.

Wow, gorgeous display! I wish I was going to the National Exhibit to see it in person. You must feel very proud. Thanks very much for sharing.
M

Thank you all... I am honored and humbled by your enthusiastic response to my offering. Mike, you could knock me over with a feather at the moment - special thanks for your haiku my friend...

Since most of us used to play at BT.. many who have been around a long time knew me when I was still busy killing home depot junipers that had been styled into the MOST appalling forms that defied gravity and logic .... so to have my first try at this so well received by a group of my much admired and even loved peers, warms my heart.. and I am full of gratitude for your collective kindness.

Rock... you are absolutely correct about the placement of the scroll... I wish I would have had more space to do the whole display for the photo shoot, but I could have managed to get it up higher and I was distracted by what I saw (the relative height of the scroll to everything else in totality - it's trimmed out of the photo)... and I did not keep in mind the positioning of the most important thing in the scroll... the moon. Thank you for that observation. I will be sure to not make that error again.

Tom... I'm glad you liked the kusamono... I'm pretty fond of it myself.

Now one thing I wanted to point out is that I have NO control over the background at the Exhibition... so I imagine it will be nuetral... I just wanted to take the different photos because I was so struck by how much it changed the mood of the whole thing. Literally night and day... and both have their merits and their faults.

The satsuki is a 'kaho'... not that you'd know it to see the facing flowers... though some on the back have the pinks. There are some buds, so maybe it'll actually get there with some flowers... It started blooming in April... and things were well under way to be well and truly done before it had to go... so I did make the decision not to waste energy on the flowers if it wasn't going to show with them, and instead I decided to focus on health, form, and the overall display. Then not a week after I took out the flower buds, the weather changed.... it got cold, wet, and dark... and it's stayed that way. There's actually some sun at the moment and it's 63 degrees... it's been more like 40-53 for the lows and highs. So it brought the flowering to a virtual crawl.

It may end up with flowers, and that would be nice, as long as it's enough... so we'll see... did I make the right choice...?? Maybe maybe not... but what I do know is that the tree is very lush and quite happy... so no matter what I lost out on seeing, there is no way I can count it a truly bad decision.

The tree will be going by refridgerated truck which is taking all the trees from the NW out East and picking up others along the northern route. It's being paid for by the Exhibition... with an option to donate some money to help off-set the cost of the price to send the trees east.

Wayne... thanks for the compliment on the photography... I know you have mad skillz in that arena yourself.

Warmest regards to all, 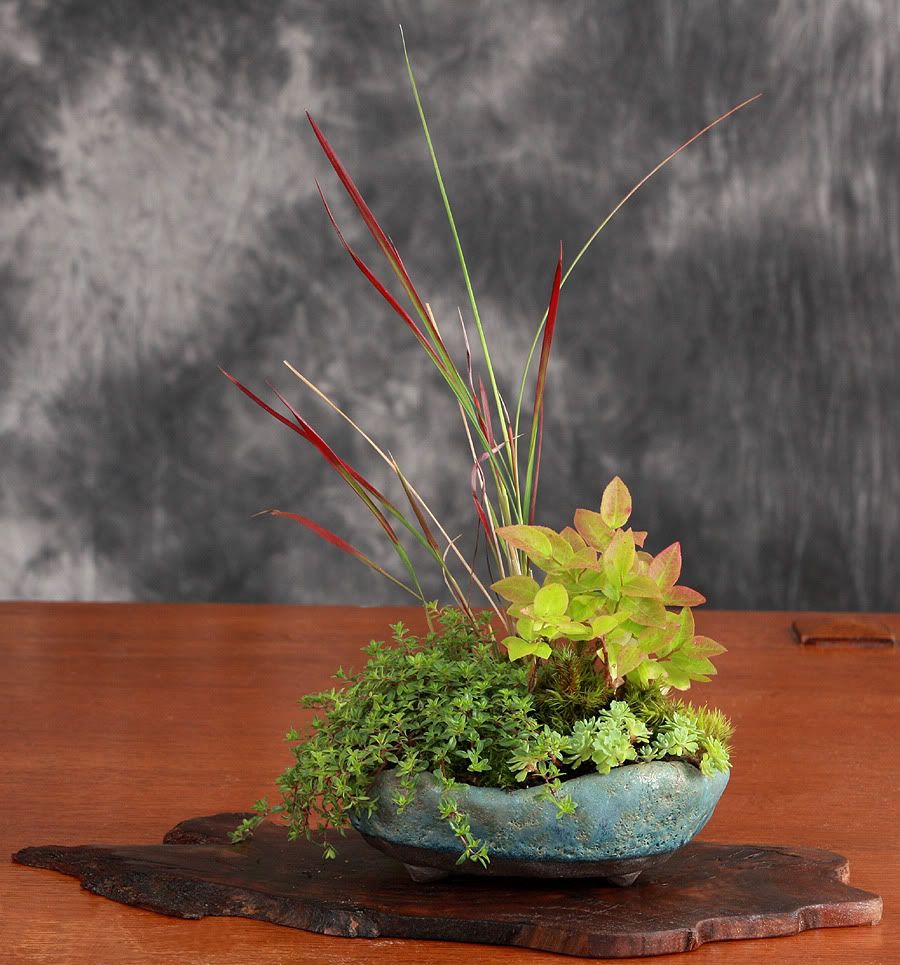 I thought you guys might enjoy a closer photo of the kusamono.

V
You must log in or register to reply here.

Another US National Bonsai Exhibition Entry
2 3